The evening began with congregation. Then, a figure appeared, cloaked. A fortune cookie was thrust in our hands as we were led to a tight winding stairwell, into the rough and unmaintained bowels of De Waag. The cookie was broken: ‘Your road to glory will be rocky, but fulfilling.’ The cloaked figure nodded. It turned out to be Mini Maxwell; our guiding light. She opened the wooden door to a space where we were greeted with the first of many rituals

LD Garnier welcomed us with his alchemistic table laying in wait. Test tubes lay in iced bowls, flagons of colored liquid lay strewn across the table. The formalism of the setting was undone by his slightly nervous candor. Like he was presenting a gift he hoped we would enjoy. He invited us to place a small seed into our mouths and to bite on it. It gave a nervous sensation that numbed our tongues. LD asked us to drink from a glass that he already warned was bitter - a gesture that cannot help remind one of the sacrament. Take this for it is my body. After the taste of the cocktail abates, it left only a tingling anticipation in the mouth. 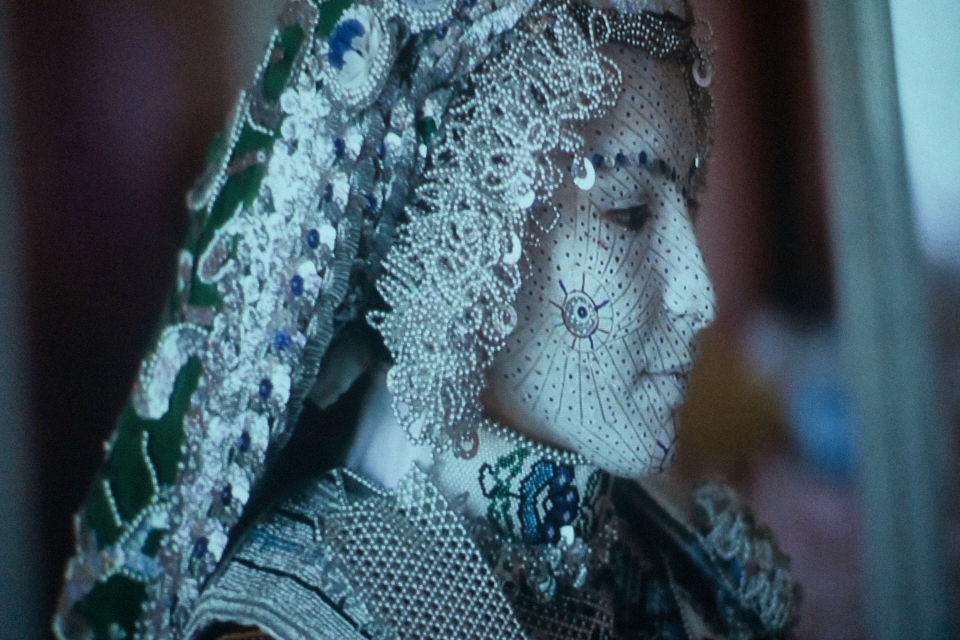 Astrit Ismaili emerges, covered in baby oil and chainmail. What else would you expect of the master of ceremony. Their presence was uncanny and slightly displaced as they teetered on stripper heels: a stark contrast in the formal architecture of De Waag. Astrit announced: ‘I declare tonight officially opened’ and we are reminded that we are not at a party, but at a procession.

The familiar gateway of Skype is displayed. Nita Deda appears and tells us about her film. It portrays a dying ritual of bridal beautification. The face of the protagonist is painted with intricate patterns in white, blue, red and gold designed to ward off the evil eye. The final results are contrasting to what we commonly consider pre- marriage beautification in mainstream Western culture. Smokey eyes and stained lips are replaced by tessellating patterns that follow the shape of the woman’s face. Her features merge with the patterns, her eyes blink out like central jewels. She stands in the sunlight and appears to be made of porcelain, yet the effect is not fragile, it is the opposite. 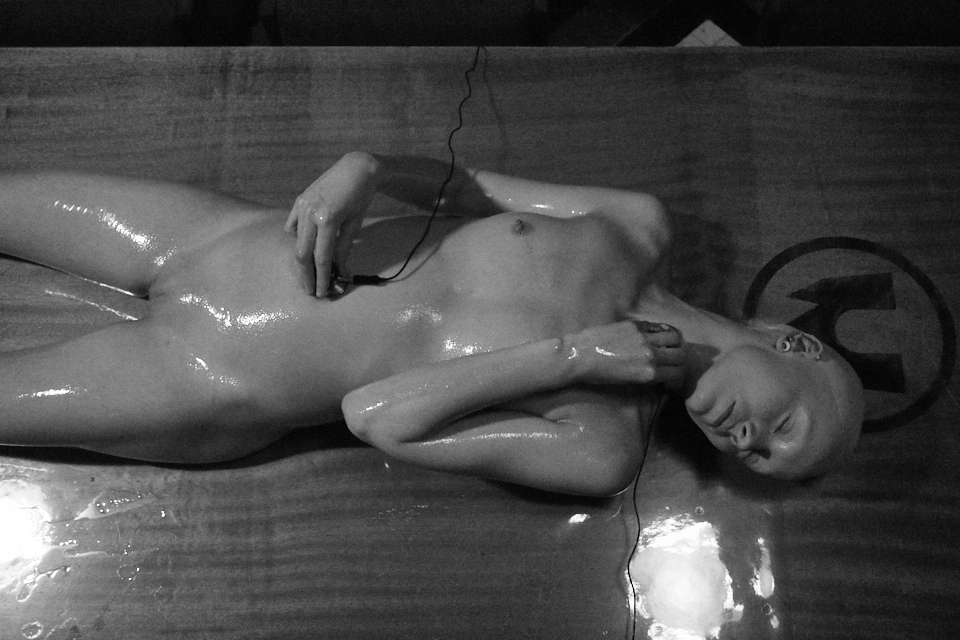 We are ushered through a door. Upon entering we are met with a nubile, oiled, naked body laying upon a table. Knowing the history of this building one could not help but asking: Is this a dissection or a presentation? Open legs reveal a vagina that winks at us like an in- joke. The body lays still. It seems to be suspended somewhere between a fetus and a cyborg. Bald, naked and yet in a way, not as vulnerable as we are; the spectators glaring at her glowing body.

Performance artist Lisette Ros places small, steel microphones on her body and we are asked to listen as well as look. We hear organs talking, alternated by her breath and heartbeat. It runs faster, filling us with anticipation. It seems the self is not defined by skin, or the shapes of breasts or hands we recognize as human. Moreover it is that what it digests, what beats, what inhales. Ros opens her eyes and meets the gaze of the audience. It shifts the presentation to  confrontation. In the reflection of her glance we encounter our own voyeurism. 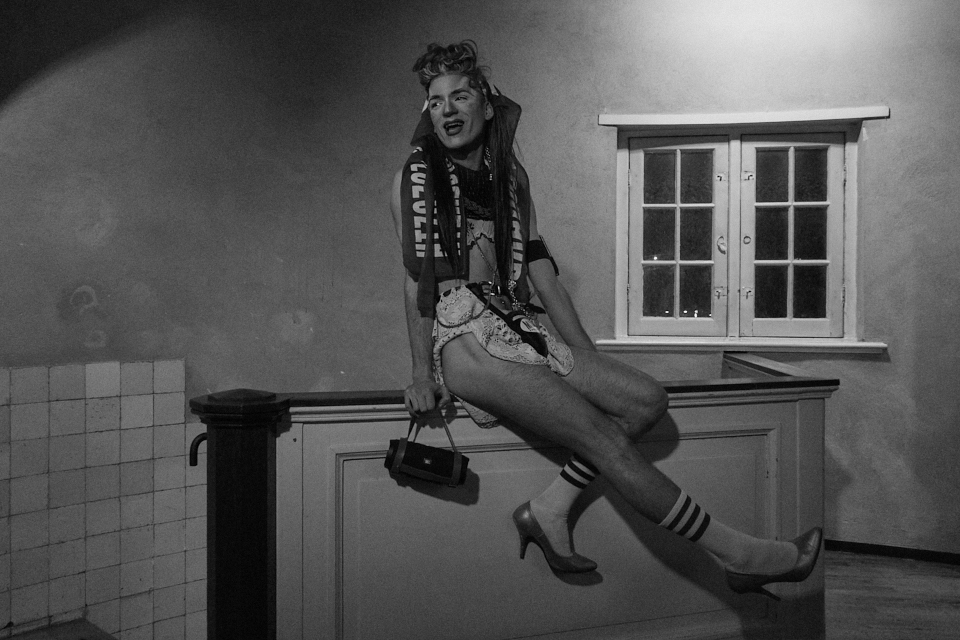 The sacrosanct atmosphere is broken by a huge projected Virtual Reality landscape designed by Javier Domante. Vita Evangelista and their performer Karin Iturralde mill about beneath it. Karin puts on her VR goggles. We follow her movements through a landscape that portrays mountains made of flesh and giant crystals. It seems to be breathing. Vita begins to speak of their relationship with their mother: ‘In the carnival pictures that my mom sent me on Whatsapp chat last month she was the Marvel super heroine Thor Girl.’ They continue: ‘Many phenomenal creatures I know are wounded, and I'm wounded too.’ Karin comes across a statue of David which becomes a catalyst for frustration as she is trying to grasp at it. Vita speaks: ‘Dear Mother Mater Matter Mantis Mouther Modern Other’. Karin is now desperately trying to grab David. Vita recites: ‘To speak from our wounding positions is perhaps to object, refusing to fit into the narrow framings that deem some lives less worthy than others.’ Karin hauls the statue of David over a cliff. David moans. From the edges of the cliff a huge pink Mantis emerges. Like a beautiful monstrous dawn to light the way of the wounded.

Autismo Incorporado comes in like a passenger. The light he casually puts in front of him is green and strobing like those outside of a night shop on an isolated street at 4 AM. He stands in front of the light. Furthermore nothing but pitch black. He shakes his head repetitively. Relentless. The beat is pounding and 15 minutes have passed. The headshaking continues, religiously. The comparison with a self flagellation is not hard to make. When he leaves, we can read the letters of the green strobing lights. Entertainment it says. How much do we enjoy the spectacle of those in agony? 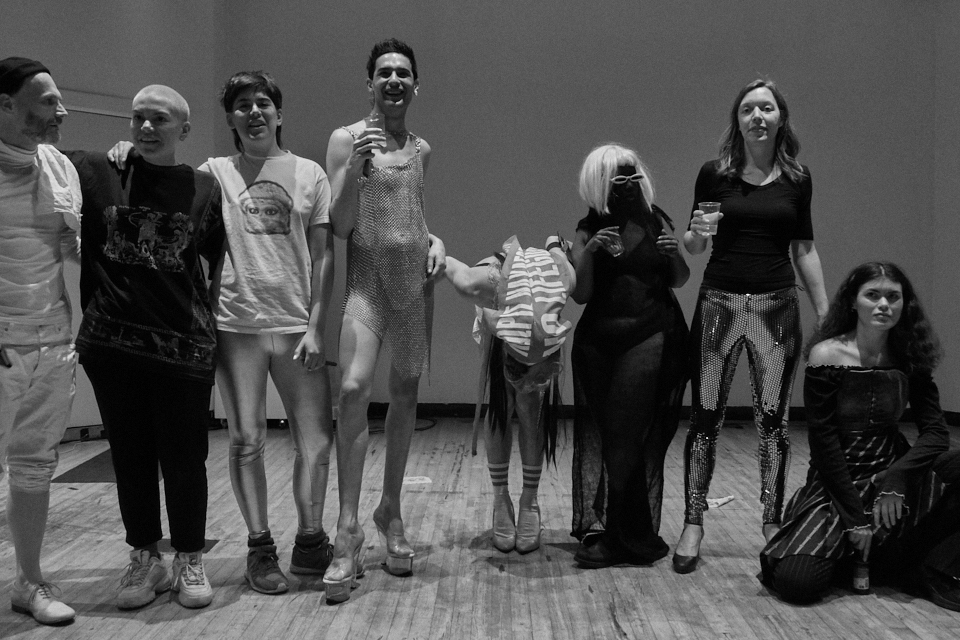 And then there was Gin. Thank God for gin.

The music starts again and naturally, obediently, we begin to form a ring around her. Like a sermon. Like a fight. Countess Malaise takes center stage and we can’t help but be reminded of the witch burnings that happened on this site only 100 years ago. Yet this time it is not a trail. It is a reclamation.

Malaise takes the mic in her hand and begins to chant. The volume of the mic is a little too quiet so we have to be attentive. We have to lean in to hear what she is saying. Although the lyrics are sexual, she herself is not posturing as an object, instead she is defiant. She meets the gaze of those watching her, she thrusts her words upon us. And with that it is very clear that we are nothing but devoted disciples at the feet of The Countess that reigns.

We return to where we started. The alchemistic table has turned into a decor of confusion and mess. LD has left the premise. It seemed there was no one left to turn to. But then a bunny appeared: Dionisios Argyropoulos Ioannou (a.k.a Dynno Dada). The bunny is a ray of sunshine; a ray of sunshine with a handbag. It says: ‘O yeah, bitch.’ In a landscape of empty glasses once filled with the holy sacrament of ritual, we look at each other somewhat disorientated. The bunny says: Flap Your Ears / Shake your Tail/ Ah Ha / Wiggle your nose. Mini Maxwell has replaced her cloak for a transparent robe combined with pink slippers and space sunglasses. She flaps her ears, shakes her tail, wiggles her nose. We let her light guide the way. We do the bunny hop - out of beat, out of rhythm, somewhat awkward; a bit displaced, but oh so liberating. We say: ‘one more time!’. At the end of the (rocky) road there seems to appear a glory hole. 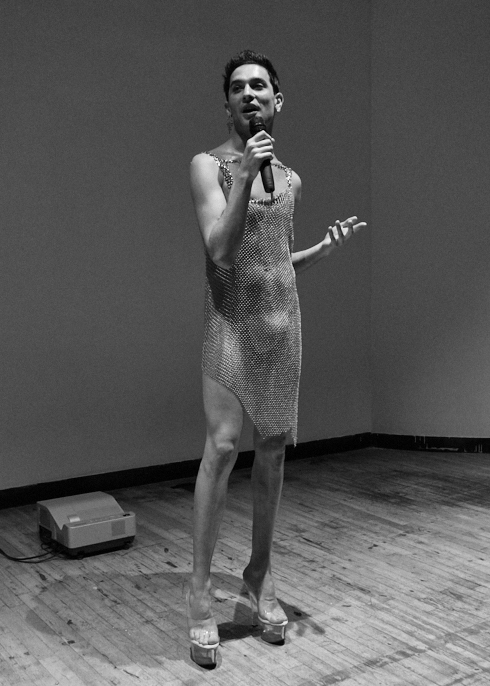 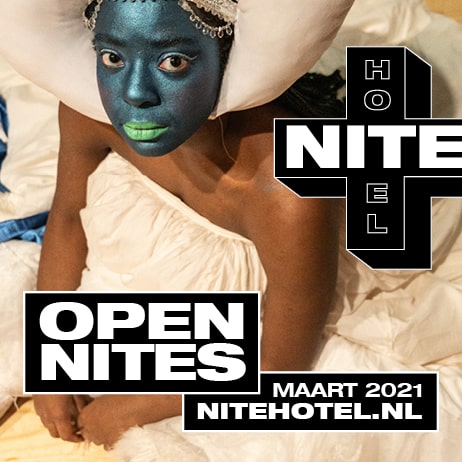