Mieke Bal is an acclaimed cultural theorist with a wide variety of interests, ranging from biblical and classical antiquity to 17th-century and contemporary art, feminism and migratory culture. She is also a video artist, and has created a series of 'theoretical fictions' about mental illness and psychoanalysis. Her most recent film, Reasonable Doubt, about the lives of philosopher Descartes and the Swedish Queen Kristina, was shown in Castrum Peregrini in March 2017. Curator Nina Folkersma interviewed Mieke Bal, focusing particularly on the perspectives of the women in the dialogues that laid the foundation for some of Descartes' ideas. 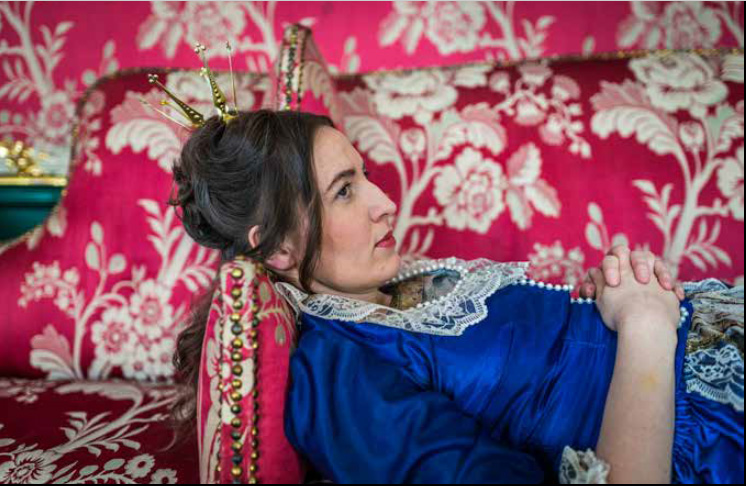 Mieke Bal - Reasonable Doubt (2015), Video Still, photo: Przemyslaw Wojciechowski
Nina Folkersma: About ten years ago you took up the challenge to 'audio-visualise thought' as you put it, to show how thinking works by using sound and moving images. What made you decide that film had to be the language by which to express what you wanted to say?

Mieke Bal: It was a way to take a closer, more intense look at contemporary culture. My first films were documentaries about migrants and migration, identity issues, and I noticed how intense the filmic look is. You not only film the material, but then you edit it and each frame comes around several times, you see it again and again. I saw the intensity of that audio-visual engagement and when, at some point, I started to make works of fiction, it became even more challenging to 'audio-visualise' the process of thought. I'm also very interested in the collective aspects of filming, the collaborations that are necessary to make a film - you cannot do it alone. That has made the constant influx of other people's thoughts a wonderful resource from which to create a sense of thinking in society, as a social process.

Why did you choose Descartes as the protagonist of your new film? He seems an unlikely successor to your previous films' theme of madness, as we know him as the classic master of Western rationalism.

What triggered my interest was the idea that the world today is so mad, that we need to look again at rationality. I thought: Let's look at Descartes, not as this enlightenment 'bad guy', not in terms of the denial of the body, of the senses, and all that - but let's see how rationality can be a resource, including the madness that is also part of who people are. In my film, you will see that he himself is stark-raving mad at certain points. This too is Descartes! The film is based on historic sources. I think it's important to realise that you can be mad, have moments of madness, at the same time pursuing a rational logic, while still constantly doubting. Today people don't doubt anymore.

The other protagonist is Kristina, Queen of Sweden, with whom Descartes had an intellectual friendship through correspondence. The film is a double portrait. Your focus on their relationship seems to be a way of showing that ideas grow out of dialogue; that thinking is not done alone, but together. Can you expand on this idea?

Yes, I think this is important, that nobody thinks alone. Thinking is a social, collaborative process involving the imagination. For example, when Descartes walks through the dunes, doing his thinking, suddenly you see the insides of stones; these insides are his imagination. He sees the stones and then he thinks: What might these stones look like from the inside? So, the imagination comes in. The relationship with Queen Kristina, and also with Princess Elisabeth of Bohemia – another of Descartes' woman-friends-through-correspondence – has made it possible for him to pursue his line of thinking, in dialogue with other people, and to come up with ideas that are quite revolutionary. 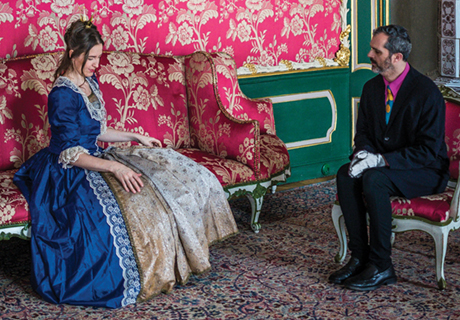 You emphasise strongly that the film is not a biography, but a 'theoretical fiction'. Some scenes are historical, based on their own writings and those of others, while other scenes are the result of your imagination. Why did you choose to combine fact and fiction?

There are different reasons. One is that it would be a very tedious film if I only used the facts we know from Descartes' biography. There aren't so many, and much of it is not very interesting. Therefore, I imagined what he could have said. For example, there is a scene in the film where he encounters Spinoza. There is no evidence that Descartes ever met Spinoza, although at one point he went looking for a lens maker in Amsterdam, and Spinoza was a lens maker in Amsterdam, so it is quite plausible they did meet. My question is then: What would have happened? What would they have said to each other if they had met? So, I staged them and part of that is scripted, part of it is improvised. The actors also bring in their own interpretations of the script and this creates a sense of dialogue between these two brilliant philosophers in the 17th century, twenty years apart, who left such strong marks on the Western world. That was worth imagining.

You wrote that 'fictionalising is a way of doing justice to historical ideas relevant for today'. But isn't this a dangerous, slippery path? What is the difference between that and today's 'fake news' or 'alternative facts'?

The difference is that Trump is covering up lies with a sense that 'news is fake anyway so you can just as well make it up'. That is not my pretension, not at all, on the contrary. What I'm doing is inviting you to imagine, together: What would happen if? You know that you are in a fiction, but you also know that through thinking you need the imagination. The importance of the imagination as a contribution to reality and to truth cannot be underestimated. So, on the one hand, I think we should go back to some sort of rationalism, and on the other hand we need to acknowledge the importance of the imagination, without confusing them. Without claiming the truth. I'm not claiming that Descartes did meet Spinoza, I'm just wondering what would happen if. 'What if' has always been my research question in studying art and literature.

At the end of the film, there is a fictionalised scene of a meeting between Queen Kristina and Elisabeth. In this scene, you suggest that Descartes invented or laid the foundation for psychoanalysis. This is a rather far-reaching claim.

It is outrageous! But it was actually completely confirmed by a book I read when I had already scripted the scene, Une Liaison Philosophique by the French psychoanalyst Yaelle Sibony-Malpertu, which studies the correspondence between Elisabeth and Descartes. Descartes liked Elisabeth, he respected her, but she had been traumatised and he was able to help her get through her trauma by telling her, in the language of the day: 'Face the facts, face the truth of your life and move on, work through it'. I argue, together with this French scholar, that Descartes had a psychoanalytic perspective on this woman's trauma. He had the generosity to really want to help her, not only was he able to do that, but he enabled her to reply to him too.

Both Queen Kristina and Descartes declined to marry and they socialised with people of their own gender. Queen Kristina was said to have had several affairs, both with men and women. Because of her capricious and bohemian lifestyle and her 'unladylike' behaviour, she was labelled by many as 'male' for a long time. Today, she is seen as a symbol of intersexuality, transsexuality, and cross-dressing. How do you see this?

It's a great issue and I think it is very important. In both cases there were rumours of homosexuality. In Queen Kristina's case, these were a little more documented than in Descartes's case, but homosexuality was not an identity at the time; it was a practice. I don't want to erase it and I don't want to make a big deal out of it. Homosexuality for me is just as ordinary as heterosexuality. There is a film from 2015 about Queen Kristina that is all about her lesbianism and I find that disturbing. It is making such a fuss out of something that is completely 'normal'. I do present it in the film, this difficult relationship that she has with a woman at court, but I wanted to show that she is having a problem with love, not so much with hetero- or homosexuality, because she was a traumatised woman. The sexual issues are thus integrated in a more general psychological make-up of these people. For Descartes, there isn't any evidence of homosexuality aside from some statements he made and some staff choices. All I did was to collect a few pleasant men around him and then you can make of it what you want. I think it is important not to erase these things, nor to over-highlight them. To make clear that it is part of the normal intercultural mix that we live in, then as much as now.