Redefining the narrative of the United States

an interview with Ivete Lucas and Patrick Bresnan.

Ivete Lucas lived in Mexico, and met Patrick Bresnan when he was living in a Volkswagen van, driving through Mexico to take pictures. They fell in love with each other, and, later on, also with the town Pahokee - a small community where both filmmakers have been taking pictures and making films for over ten years now. Their professional collaboration appears to be a success; their latest short film Roadside Attraction - about people taking selfies in front of Donald Trumps aircraft - recently premiered at TIFF, while their previous film The Rabbit Hunt – a short documentary on kids making some extra money by selling rabbits they hunt themselves - just won an award at the London Film Festival. After several short films about the area, they now work on a feature documentary about Pahokee. Mister Motley talks with them about their fascination for this mostly black and rural community in Florida.

Mathieu Janssen (MJ): I think you're making great time documents by showing all the little rituals and skills of this particular community. In your short film The Send-Off - we see the kids preparing and presenting themselves before the prom. The whole community is gathering to see what cars the kids drive and how beautiful their dresses are - a ritual that seems very important for this town. Is that actually a motivation for making the films: making sure that a community and all his rituals will not be forgotten somehow? Or does your motivation lie more in the 'now’, and do you give certain groups the attention they deserve by making these documentaries?

Patrick Bresnan (PB): Our film The Send-Off was made in a time where a lot of young African-American kids were beaten up and shot by the police and even by civilians. We felt the urgency to make a film that would demystify the youth for a wider audience. We wanted to make a very humanistic film that showed the relationships between a community and the young people, and between the parents and the kids. We ended up making a film about prom night, which we thought was something everyone could relate to. Whether you’re white or whatever other culture, you can relate to wanting to see your kids do really well on prom day.

Ivete Lucas (IL): Another motivation for us was to kind of redefine the narrative of what the United States are. The mainstream narrative is obviously very white, and also very urban. We’ve been working with people that are rural and therefor outside of the mainstream for a long time. That makes them frankly more interesting. We love to make films about them and giving that side of America more cultural visibility. So I guess you could say our motivation lies more in the ‘now’. 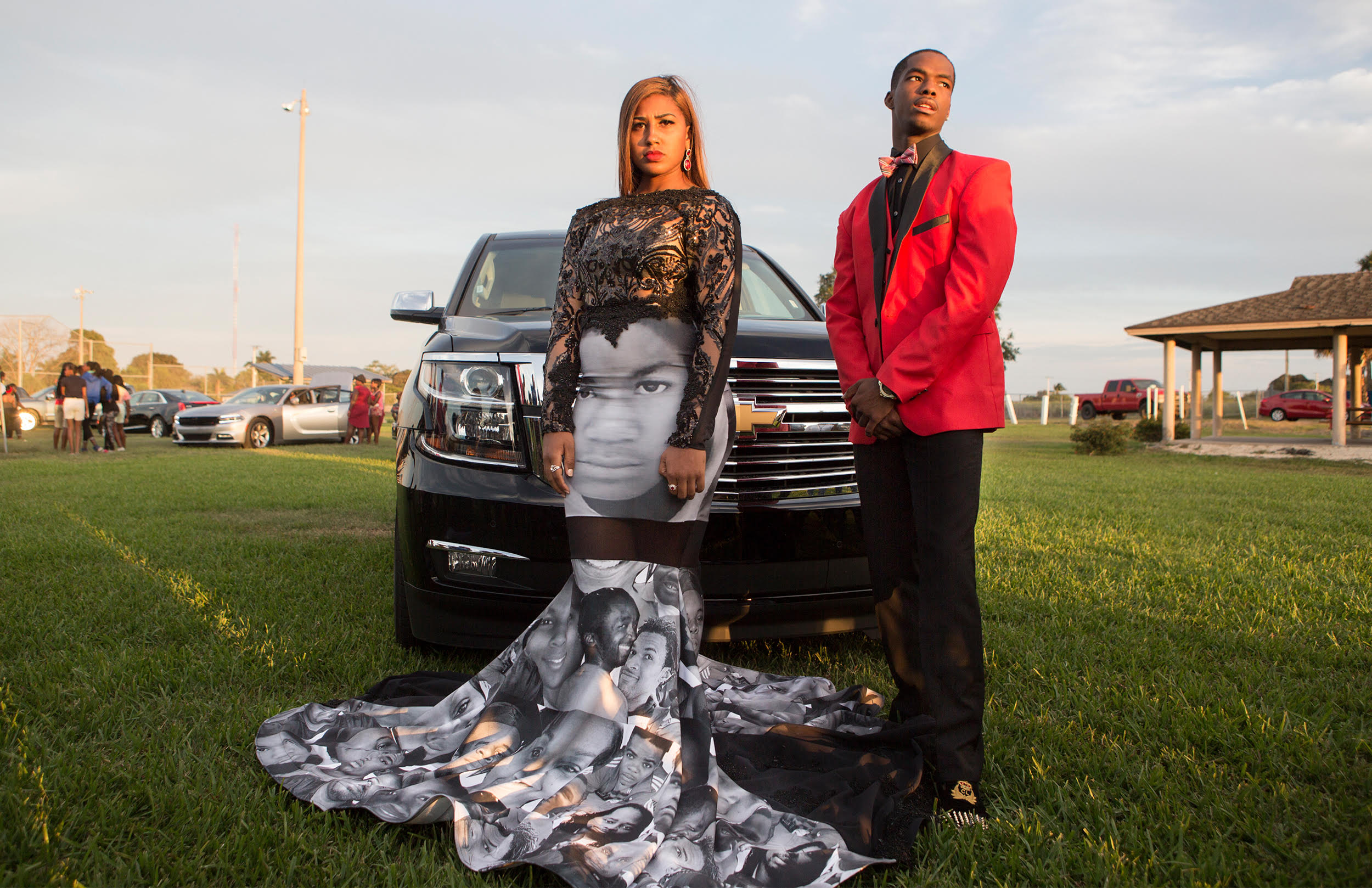 MJ: What did the people of Pahokee think of the films?

PB: They love the films. For many people in rural America, Facebook is very important: liking and sharing is the main currency. Our films are very much in the same vein for them; starring in our film is like going live on Facebook. They also appreciate the films like they appreciate a wedding video. We film special events, so our video’s are preserving the culture for the community.

IL: And they like to see their selves correctly represented. In America everyone has access to internet, so no matter how rural people are, they are used to see themselves on screens. They’ve been represented by the media, though in ways they don’t fully like. We try to really listen and show the authenticity of these communities.

MJ: I also think that you treat your subjects in an honest way, with no judgements whatsoever. But in your latest film, Roadside Attraction, I sense a more comical tone. Are you mocking the selfie-taking-Americans in front of Trumps plane, or do you see a particular beauty there that you want to show?

PB: For us it’s not mocking, but surrealism (Ivete laughs). So in the film you see the plane of the president being parked very close to the road, acting like a giant magnet. It’s pulling people from a very busy street, day in day out, to take pictures of it. We’ve been seeing this scene for maybe three months before we shot the film and kept thinking: we need to record this, because it’s so bizarre.

IL: It is the road to Pahokee, the little town where we made The Rabbit Hunt and The Send-Off. The road also goes to the coast - where people are very wealthy and where Trump has Mar-a-lago. When Trump won the elections, it became Air Force One and people started gathering there. We are genuinely interested in social phenomena like this; it says a lot about our country and what goes on in people’s minds. 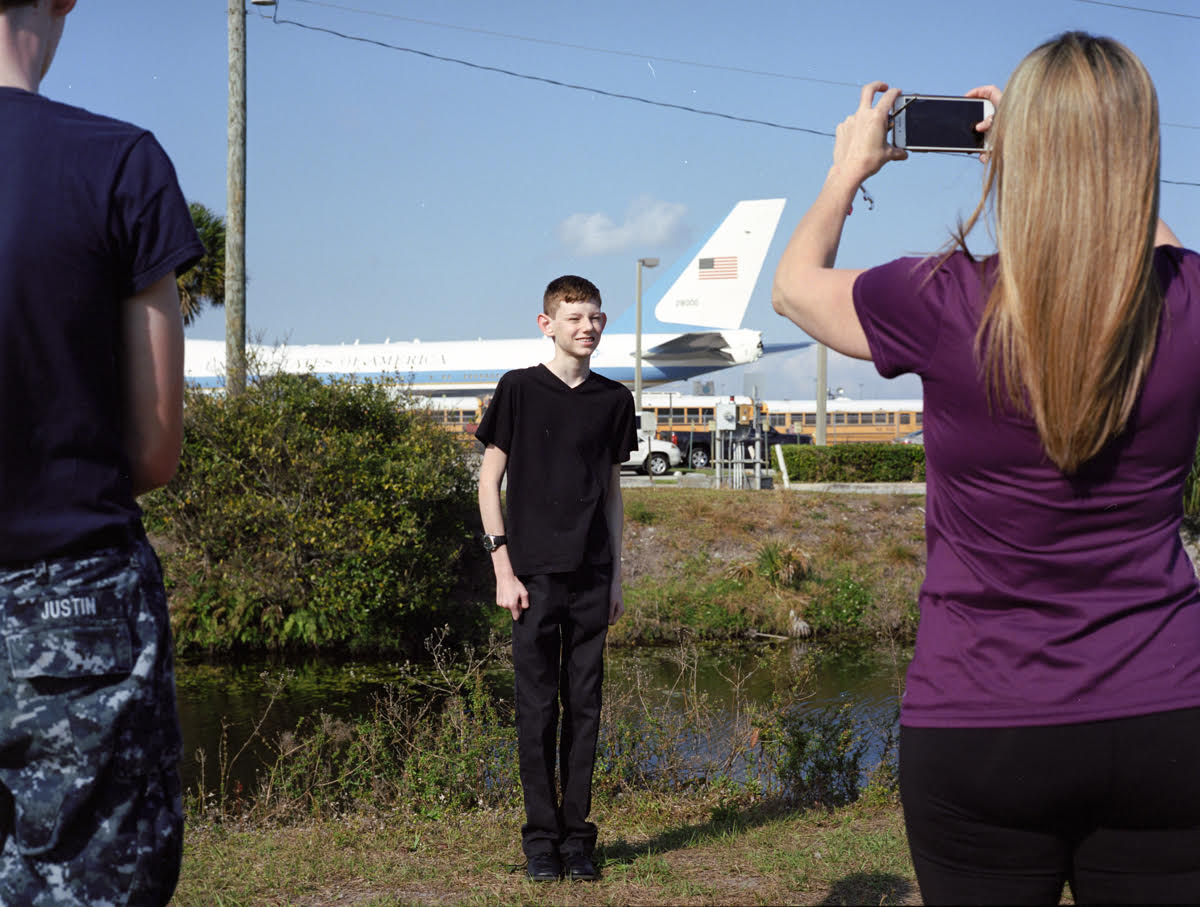 MJ: What is going on in the minds of this Trump crowd?

IL: It’s not a stereotypical Trump crowd, it actually defies the stereotypes of who would be taking their photo with this plane.

PB: Yes, these people are not necessarily Trump fans. The real Trump supporters are down the street by his house, holding signs that say: hunk your horn for Trump. They’re very violent. The people at the plane are more regular people that can’t believe that the presidents plane is in their neighborhood.

IL: So obviously there were some Trump people, but there were also people speaking Spanish. It’s fascinating to see all these people with different backgrounds taking their photo there; it’s not just about Trump. I’m not sure what exactly goes on in their minds; are these people gathering for their patriotism that is represented by this object? The complexity was very interesting to me.

MJ: Roadside Attraction also shows a fascination for the act of making a portrait.

PB: I’ve been a photographer since I was 15, I’m 41 now. It’s almost like an addiction for me, I just need to do it. The camera also became a social tool, a way to really enjoy interacting with the environment around me. So seeing all these people so obsessed with taking pictures was a moment of pure joy for me, I felt like a kid at the circus. Nobody cared that I was videotaping them, because they were so into the act of taking pictures themselves. It was like a buffet where you can eat forever; there were just endless pictures for me to take.

IL: All these people making portraits also speaks a lot about where we are in terms of society and technology. The imagery that we make has become a way to define ourselves. The people are there to see the plane, and they want a document of that. And they are able to make one, with their phones.

MJ: everyone can make a picture at any time nowadays – I guess this changed the way we use photography.

PB: Like I mentioned before, photography became a currency: sharing a picture, receiving likes and getting comments like ‘beautiful picture’ is a way to validate your existence online. The access to technology has been very democratizing to the medium of photography.

MJ: Does it also changes the way we act? I mean, do we behave differently because we know our picture can be taken at any time?

IL: They want a red carpet, and they want to have paparazzi too. The prom night turns into an act of becoming a photograph.

PB: The prom is all about the chance of going viral. Will you have the dress that will go viral? I think the lady in the dress that featured black people who’ve died after encounters with the police had 300.000 likes.

IL: She went viral. The kids would say that she ‘stayed prom’.

PB: So they are very much competing in the arena of beauty and imagery and …

IL: And representing themselves. It’s an empowering act for them, because they get to define who they are for a night. They are in control. 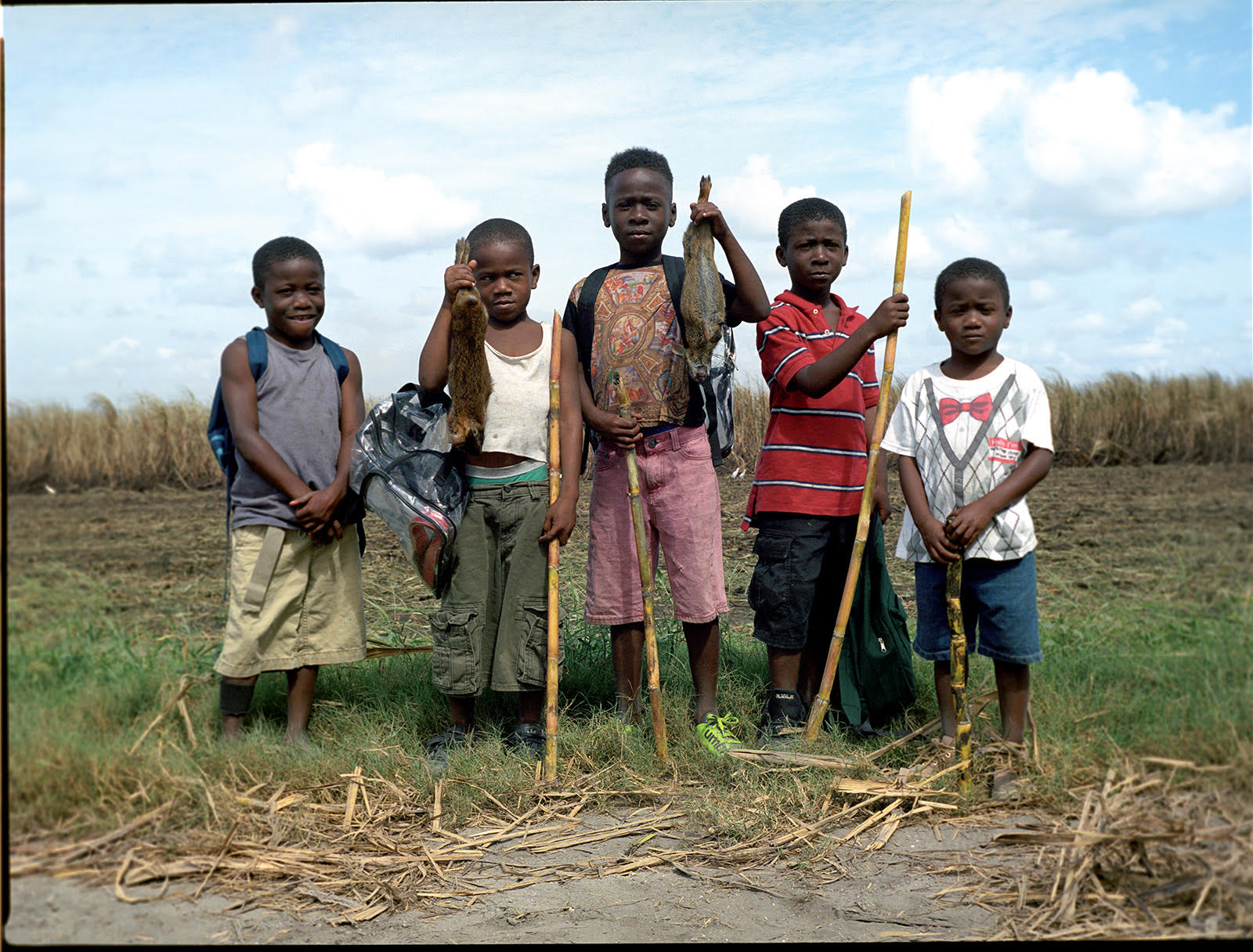 MJ: The rabbit hunt is less glamorous. The kids in the film brutally knock down rabbits that flee from a field that is being harvested, and at some point we see them proudly pushing out the insides of a rabbit.

IL: For them that’s not shocking at all - the act of killing, eating and cooking rabbits has always been part of who they are. Urban people like us can buy meat at the grocery store, and are even able to become vegetarians or vegans and buy things like tofu.

PB: Also there are no jobs for teenagers there. The film is very much about the resourcefulness of people in that region, they have to be very entrepreneurial. For the kids in the Rabbit Hunt the photo’s we take are a marketing tool. They post the photos on Facebook and say to their community: ‘Chris has very good rabbits, if you need rabbits, call Chris.’

IL: At the end of the film you see them looking at a slideshow they created for Facebook. The Rabbit Hunt is about the relation they have with their family, with others in the community and also about their relation with nature, food and..

MJ: And probably their environment? We see the sugar cane fields, and the mill in the background - I believe it’s one of the main industries there. The connection with the people is already visible in the beginning of the film: we see the mother pouring a crazy amount of sugar in their cereals. Is that for real?

IL: They do the same thing with spaghetti. We brought them to an award ceremony in Florida once. They had spaghetti and were like: ‘Where is the sugar?!’ They went to a coffee bar to get sugar for in their spaghetti. [end] 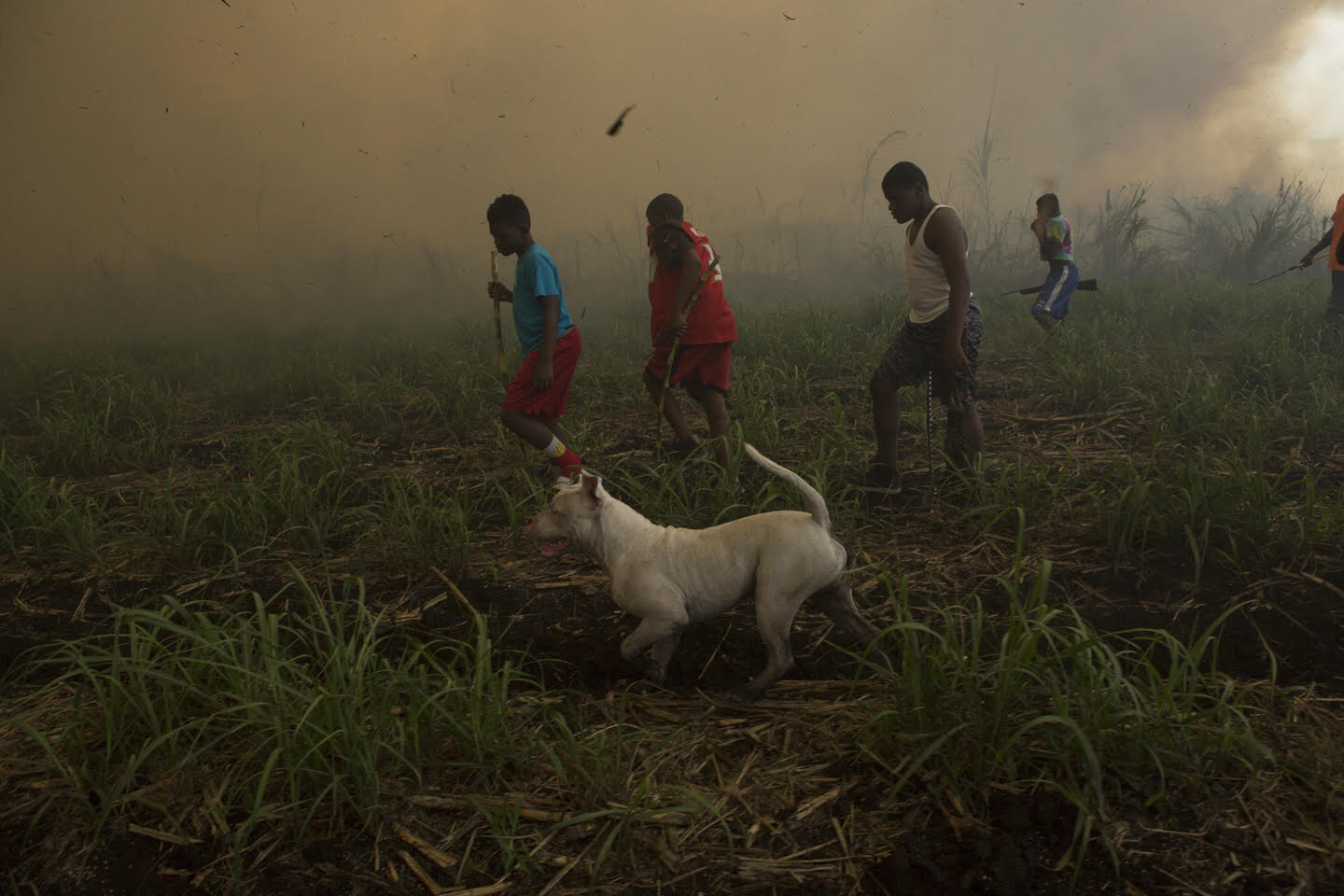 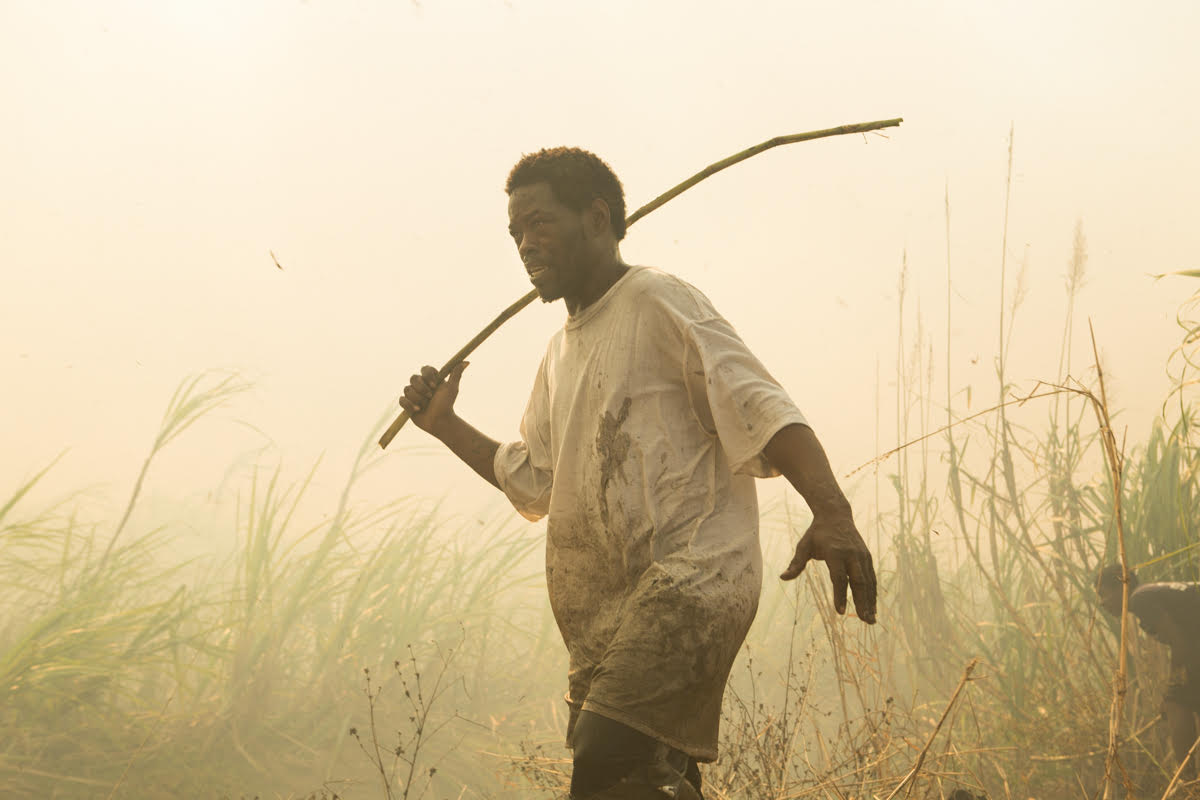 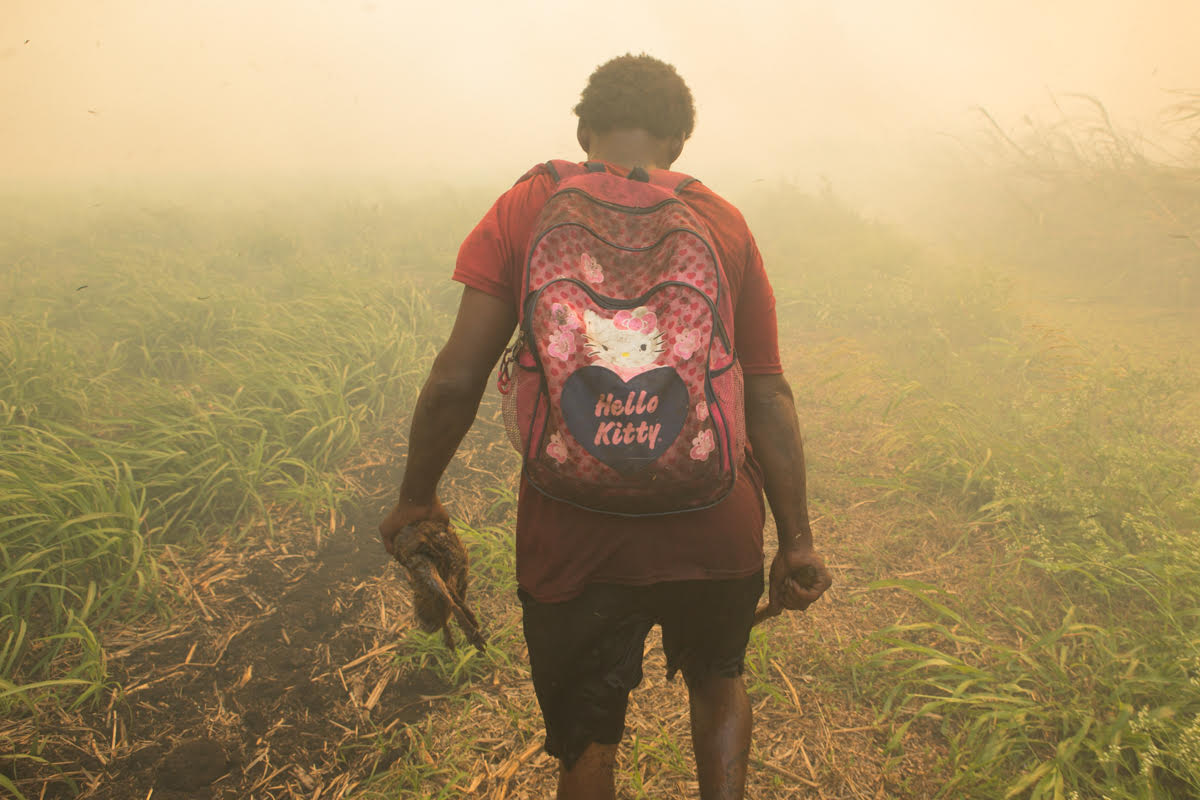 All photos in this interview are made by Patrick Bresnan, and have been previously unreleased.

For more of his work, check out: http://otisike.com/