In this series of large and small drawings as well as installations, different elements from Van Veluw’s boyhood bedroom are depicted.

Whereas the previous series incorporated themes of control, order and structure, in these works we witness the disintegration of this. Structure ruptures into chaos. Visions of collapsing desks, falling cupboards and exploding cabinets pinpoint the moment of this rupture. Human constructions find themselves undermined by forces of nature such as gravity, water and wind and are in this way rearranged into a new, natural order of things.

Although these works play on our fascination for destruction and need for disorder, they do possess an inherent compositional equilibrium. The physics of falling objects has a logic that is bound by rules. Each image has been carefully composed by Van Veluw in drawing studies. The placement of each element was not left to coincidence but was a pre-meditated choice of the artist. 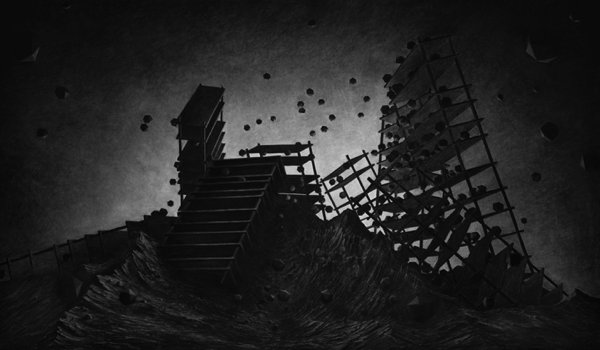 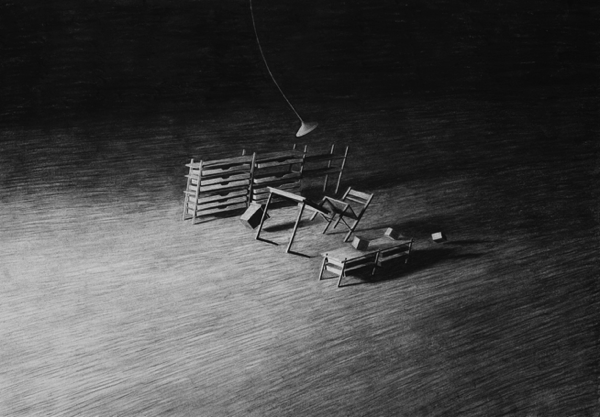 We are also excited to announce the first official publication by Levi van Veluw. The book Origin of the Beginning offers a survey of all the photographs, drawings, installations, sculptures and videos produced by Levi van Veluw from 2006 to 2013. This extraordinary book is an artwork in itself. Besides beautiful artwork reproductions, the publication contains a special handmade wooden block, which has been placed inside a cut-out square hole that perforates the book. Visible from the front cover through the whole publication, this wooden element refers to a number of Van Veluw’s art works and can be considered an essential foundation on which his work is built.

The series of works entitled Origin of the Beginning comprises photographs, drawings, installations, sculptures and videos in which the artist draws on memories from his own childhood to develop his own thematic and narrative brand of self-portraiture. These neatly structured works refer to his obsessive attempts to gain control of his life. The daily struggle to regulate this chaos is the central theme of this series and is also Van Veluw’s reality. His work is compelling, melancholy and above all visually stunning.