‘Please don’t take yourself so seriously’ - an interview with Gluklya

Loneliness of the intellectual (2008), titles one of the drawings featured in the permanent collection of Museum Arnhem. The pseudonym Gluklya is used by Russian-born artist Natalia Pershkina-Yakimsnskaya, who isn’t afraid to use more than paint brush and pencil. As a result of her repressed existence under Putin’s regime, she now seeks to support those who are without a voice through her activist art. She seeks to better the world through performance, video, art instillations and protests. Her smaller works - which are on display in Museum Arnhem - represent only a tiny aspect of her many facets as an artist. This feminist artist, with a heart as big as it is blazing, invites me to visit her studio in Amsterdam, where she lives and works alternatingly with her residence in St. Petersburg.

Ellis Kat: ‘What made you leave Russia for Amsterdam?’
Gluklya: ‘I came to the Netherlands ten years ago. I’d been invited to take part in an exhibition called Inertia in W139, curated by Erik Hagoort. The film we presented was called Three Mothers and a Chorus. I co-created it with my fellow artist Olga Egorova. The film is about contemporary motherhood and the demands that the Russian society – for example - places on new mothers. During the time my artwork was exhibited, I met a man who really liked the film. He would later become my husband.’

‘Ah, so you stayed for love!’
Gluklya: ‘Yes, for love at first. In that respect it’s a romantic story. But you should know my life felt like an explosion at the time. There was no way for a feminist artist to lead a normal life under Putin’s reign. My artist friends and I were being silenced. We were forbidden to speak out which made living in Russia increasingly difficult. To map out these political and sociological changes, we started the project ‘The Factory of Found Clothes’; a critical platform that allowed us to speak out through clothing we conceptualized ourselves.’ 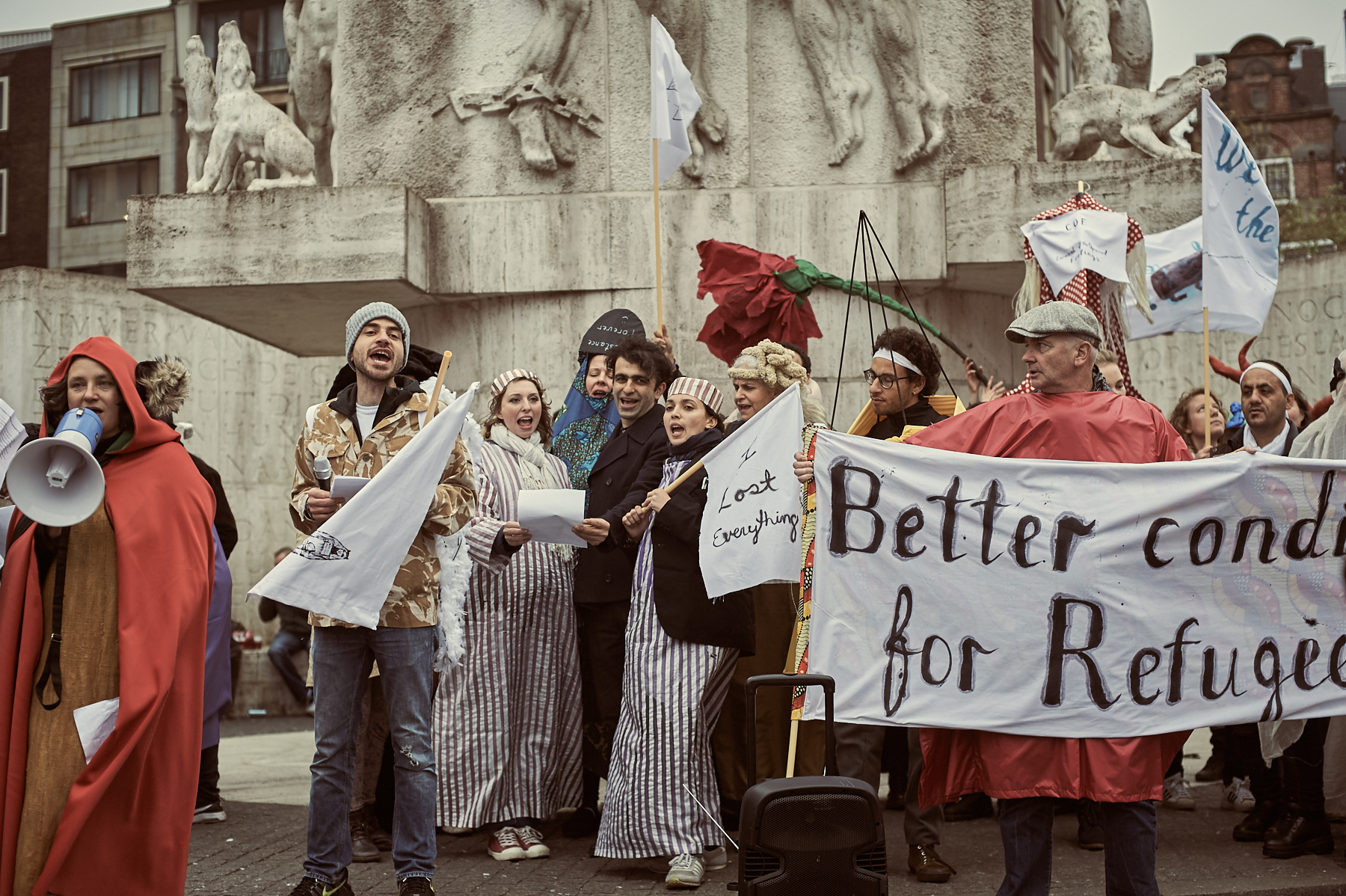 Gluklya (depicted on the left) while protesting during ‘Carnaval of the oppressed feelings’ in Amsterdam (2017). Gluklya took to the streets, accompanied by refugees being housed in the ‘Bijlmerbajes’ (an old prison in Amsterdam) all wearing clothes of their own crafting to show their vulnerability and what it is to be human. During the protest the ‘Utopian Unemployment Union’ was propagated, urging refugees and artists to stand together.

‘Is that the reason why you started using Gluklya as your pseudonym?’
My pseudonym is most certainly a mask. It makes me feel like I can express my opinions more freely. It’s a tiny bit like escaping reality… and the police.’ Gluklya laughs. ‘I’ve been working under the name Gluklya since the nineties, when I started creating art. It was in direct response to the Soviet Union’s brutality. I felt so trapped in the bureaucracy that I wanted to rebel against these ‘rigorous beasts.’

‘In what way does assuming a pseudonym help you rebel?’
‘Humor. I find it very important that I’m able to be ironic in my work. The name Gluklya means absolutely nothing. It’s a made-up word. It’s a Dadaistic, child-like scribble. It’s a subtle nod to the official language of those in power in Russia.’ 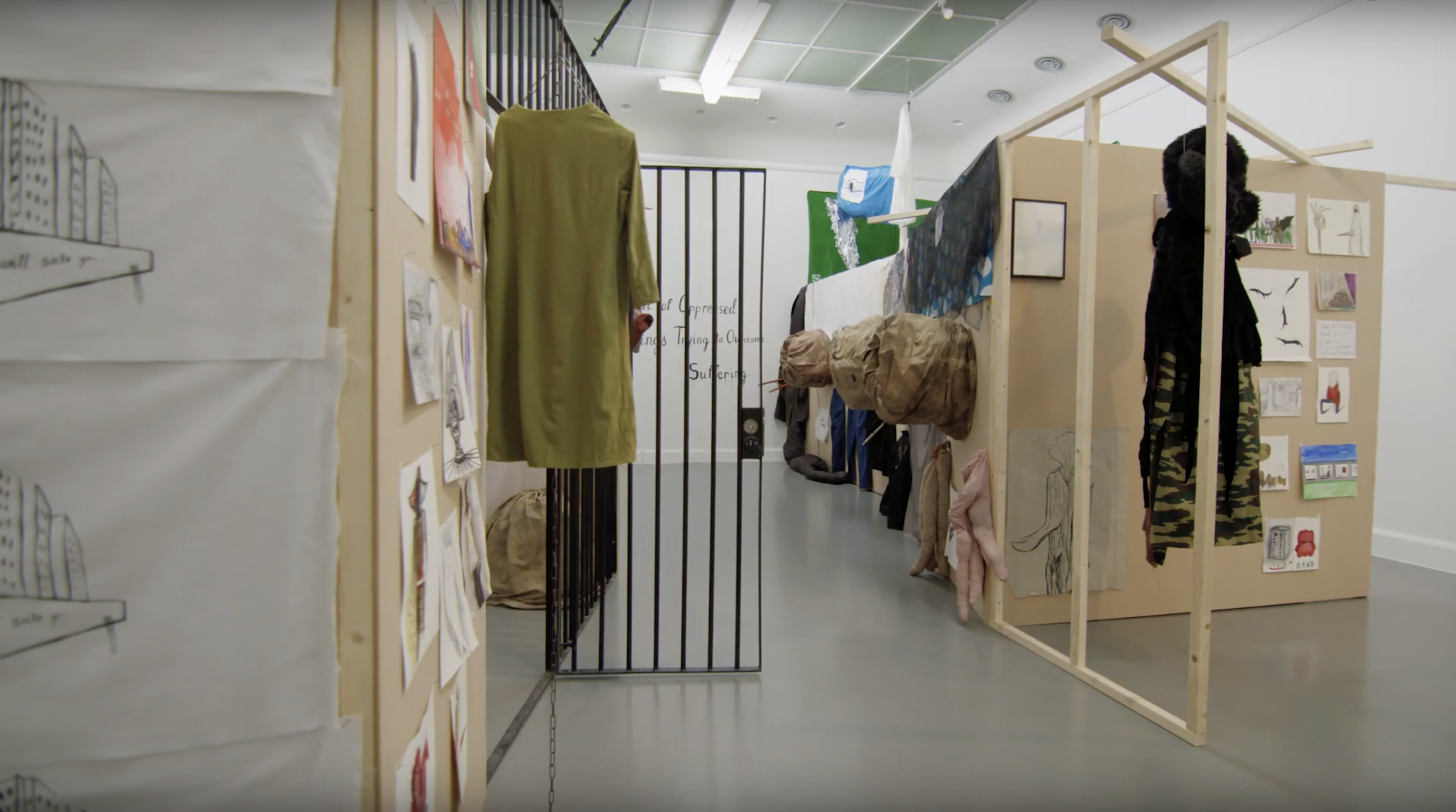 At the current exposition ‘Positions #4’ in the Van Abbemuseum, where Gluklya is engaging in a dialogue with fellow artists Naheem Mohaiemen, andi Hilal, and Allessandro Petti about activism’s place in art. The artist shows her installation in which she playfully questions the power structures in a public space.

‘You are currently living alternatingly between Amsterdam and St. Petersburg. To which extent is staying in both extremities crucial to making your art?’
‘Russia isn’t that extreme. It’s no China or America.’ Gluklya chuckles. ‘However, it is indeed extremely interesting to live in both cities. It’s a funny paradox: now that I’m slowly starting to learn a little Dutch, my brain is trying to express my thoughts in my mother language better than ever. On a larger scale, this rings true for everything. Seeing what society is like over here helps me to broaden my horizon regarding Russia’s societal standards. Although I carry a certain amount of hatred for my country, it’s still very much in my roots. There’s definitely a common thread in my art. I work on site specific projects on both locations. I’m not going to carry out a plan with Russian people in Amsterdam. People will view me like some sort of exotic artist who arrived here to do some stuff with ‘her own people’. I’m not interested in being such a stereotype.’

‘Why is it of such importance to you to involve local communities in your art?’
‘Because I lived without a voice for such a long time. I am a migrant myself and I know what newcomers might feel like - that’s why it’s important to recognize minorities and place them on a metaphorical pedestal.’

‘Do you believe art can save the world?’
‘Of course. I’m convinced art can change the world simply because I’ve seen it happen with my own eyes. Although… Art cannot literally save the world, but it does have the power to defiantly change people’s perception on things. I have often had people tell me a protest, a performance or a manifesto has changed their lives. One time I made a dress with an oppressed woman depicting her family in images and text. Upon her return home, she wore the dress. Her family was shocked to see her literally dressed in painful memories. This confrontation consolidated the first real contact they’d had in years. This confrontation consolidated the first real contact they’d had in years. It may seem like something small, but it really did change the lives of the people in that family. Artists are supposed to fight the inequality in the world. But an ideal world? Surely, there’s no such thing. I refrain from using the word ‘ideal’. I’m not a crazy person.’ 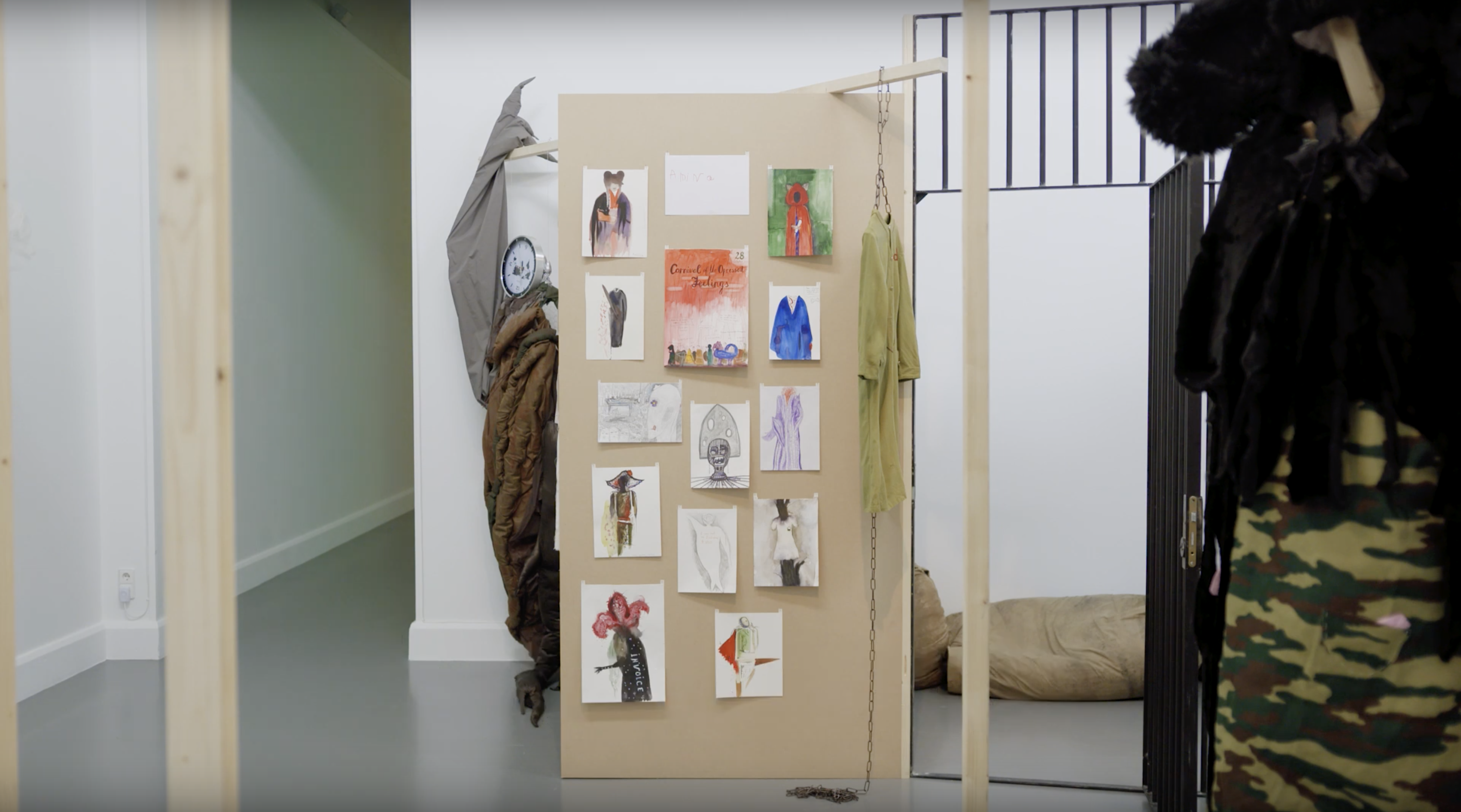 Part of the installation at Positions #4. This exhibition is based on the beforementioned ‘Carnaval of the Oppressed Feelings’. Also, the birthing ground of the Utopian Unemployment Union (UUU) where Gluklya together with refugees, students, scientists and other artists fights for a peaceful society.

‘In your manifesto I read the line ‘Artists are on the side of the weak’. Is that what you mean by that?’
‘Yes. When capitalism was relatively new in Russia, artists operated under the assumption of being the elite. They lived in their own world and didn’t care for their fellow people. I do not want to be like that. That’s why I started The Carnaval of the Oppressed Feelingsin the Bijlmer prison. Together with the inhabitants of the shelter we had a parade in costumes of our own crafting, depicting their fears and vulnerabilities. The motto ‘On the Side of the Weak’ doesn’t mean I’m in the same position as the refugees, it just means I want to help. Every artist should attempt that shouldn’t they?’

‘Why just artists? Why not people in general?’
‘You’re absolutely right. You’re the first person to remark on that, very good indeed! Lenin wrote in one of his first books: ‘When the communism comes there will be no art, because everybody will be an artist.’

‘Like a Russian Joseph Beuys?’
‘Artists have simply lost their hero status, they’ve become one with the rest of the people. That’s how I feel about Positions #4, the exhibition on display at the Van Abbemuseum. The refugees I work with for that project are on equal ground with me. I’m helping these people, but they are helping me to be a better person too.’

Part of the installation at Positions #4. Gluklya combines languages from different cultures by linking sounds from the words in Dutch to an Arabic term that sounds alike.

‘In what way are your paintings and drawings an expression of activism, compared to your protests and performances?’
‘I make drawings from a place of frustration. Actually, maybe it’s a way to protect me from the frustration. Drawing and painting is a very meditative experience for me. When I want to empty my head and organize my thoughts, I just grab a pencil or a paintbrush. These works often turn out based on activist topics, because those are the things that keep me busy. Activism is not limited to a single technique. Sometimes I create an installation, other times I create a painting or a costume.’

‘You talk about serious subjects in your work, but it often turns out very light-hearted, sometimes even humorous.’
‘Like I said before, irony is very important in art. This says a lot about how you view yourself in this present-day world. The rise of Hitler – wars in general, partly arose because of a lack of irony. I’m sure of it. If you take yourself so unnecessarily seriously, you’ll turn into a narcissistic fascist.’ 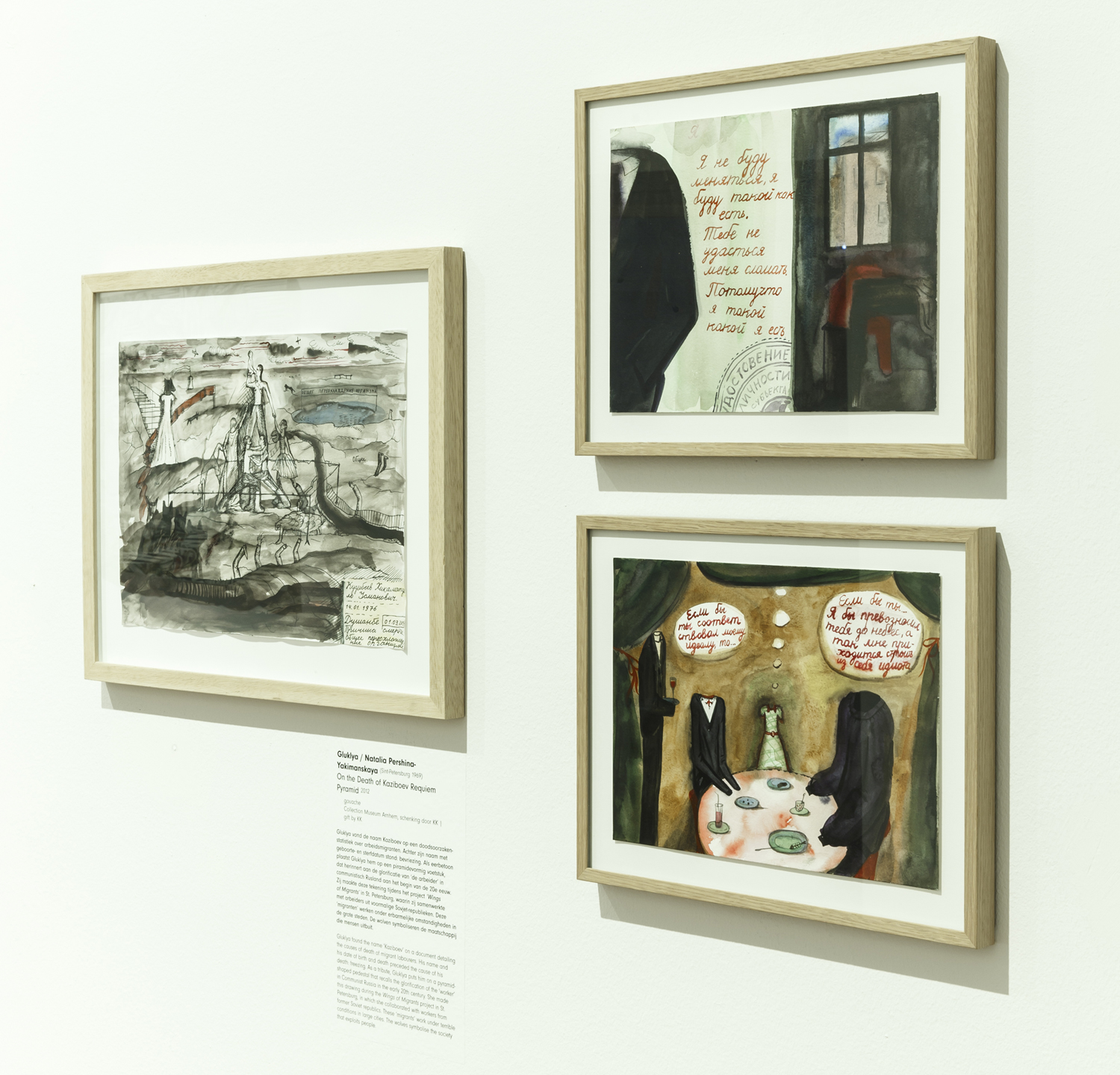 Gluklya, Loneliness of the Intellectual, 2008 (watercolor and gouche, 21 x 30cm, artwork in the top right corner). This work is divided in two parts. Left, the devil - I’m kidding, that’s my husband - and right a grieving woman. The Russian text is translated to English on the back: I will not change, I will stay as I am.  I will never change myself. I will stay as I am. You will not be able to destroy me, because I am as I am.

Being able to laugh at yourself is very valuable to art, and to life in general.

‘Like the protagonist in your work Loneliness of the Individual?’
‘Maybe that painting is, in some way, a self-portrait. I am here, trapped between the walls of my studio, working to become a smarter, better person. However, I am alone. Being able to laugh at yourself is very valuable to art, and to life in general.’

‘Is that what you would like to tell all young artists out there?’
Gluklya is silent for a moment. ‘Yes. Please don’t take yourself so seriously. Also, welcome a refugee into your home. That too.’