15 APRIL 2015, NEW YORK
We’re sitting in the train on our way to Peekskill. George and I have been living in New York since the start of the year and today we are leaving the city for the first time. The Hudson Valley Center for Contemporary Art (HVCCA) has invited us to make a proposal for a contribution to their biennial art festival. They are looking for artists who can conceive
a temporary work in public space, preferably in cooperation with Peekskill’s inhabitants, something that is loosely based on the town’s social or geographical history when it comes
to the subject matter.

We’ve never been to Peekskill before and we have no idea what kind of place it is, and know nothing whatsoever about its history. It turns out Peekskill is named after a Dutchman,
Jan Peeck. In the mid-17th century he was the first European to arrive in this region in order to trade with the original inhabitants: the Lenape tribe. He bartered with them, trading weapons and alcohol for animal pelts and food. Being Dutch, it feels strange to be heading to Peekskill some 400 years after this Jan Peeck. We’re not coming to exchange goods with strangers, but to create something for people we don’t know. Not with weapons or alcohol, but with art.
Because we don’t know much about Peekskill’s history, we absorb the information the HVCCA supplied us with and study what we can find in the archives of the local library. There are two major chapters in the town’s history that immediately stick in our minds: the Peekskill Riots and the Underground Railroad. They are both part of Peekskill’s African-American history, but seem to be diametrically opposed—a painful chapter and a heroic chapter. We continue searching for other topics, but we know right away that we won’t find anything that will be more important for us. This is what we want to address here, this is a subject that fits with the situation in the here and now, what we as foreigners have ended up in the middle of here in the USA, and what we as Dutch people are connected with via the colonial history of our ancestors. 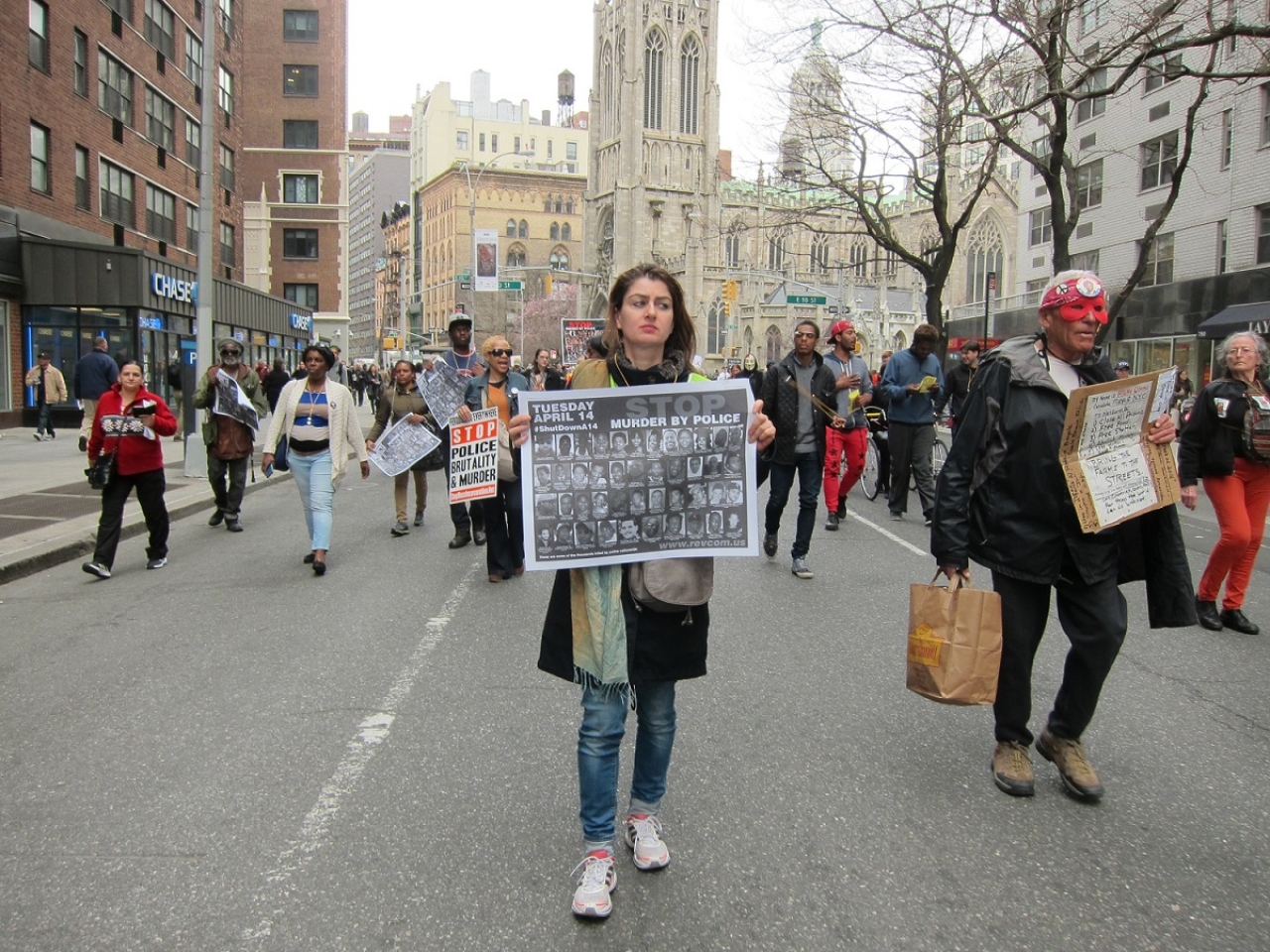 Yesterday, on 14 April, we marched with full conviction in a major demonstration against the police brutality towards African Americans. We might not be American citizens and are living here temporarily, but this demonstration was about equality and equal human values
for everyone, and that transcends nationality.
The demonstration made a big impression on us. We walked from Union Square along Broadway to the Brooklyn Bridge, where the situation on the bridge became grisly and almost got out of hand. Hemmed in by police on both sides, we were kettled in the middle of the bridge while police helicopters circled in the sky overhead and demonstrators tried to occupy the road beneath us while officers intervened. I was shocked by the situation, now in 2016, where a fanatical but peaceful demonstration against police brutality was being halted by the police. 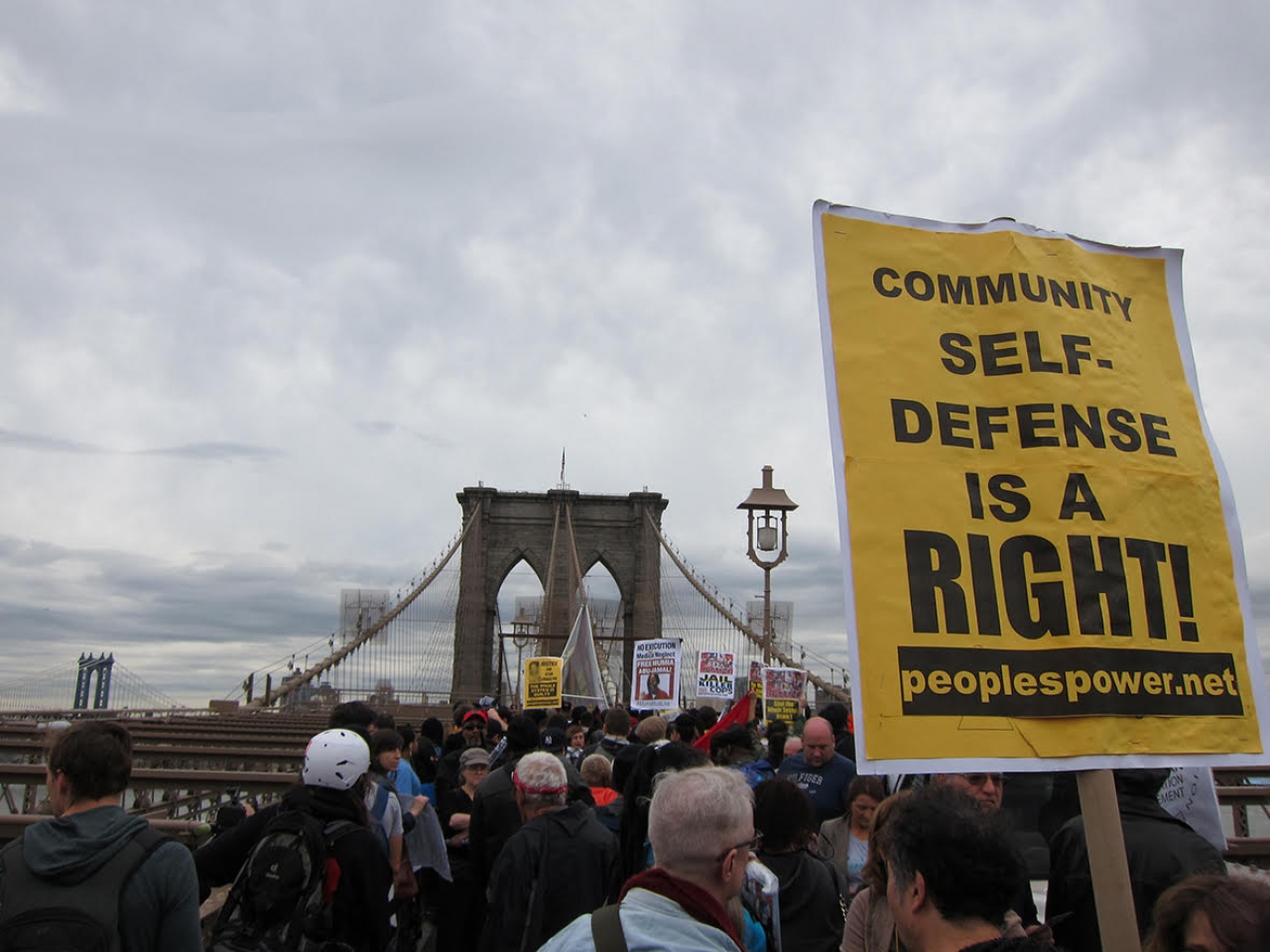 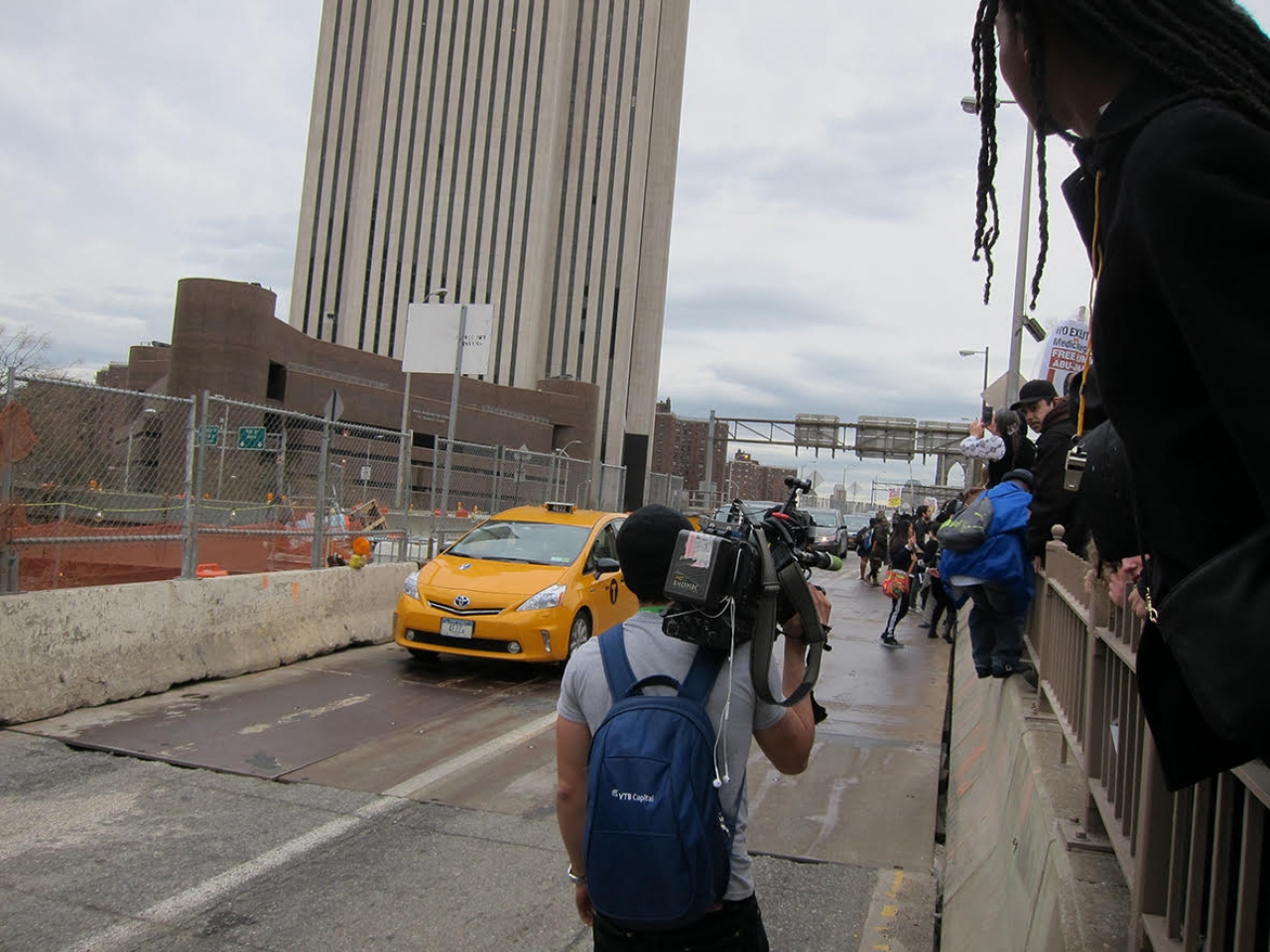 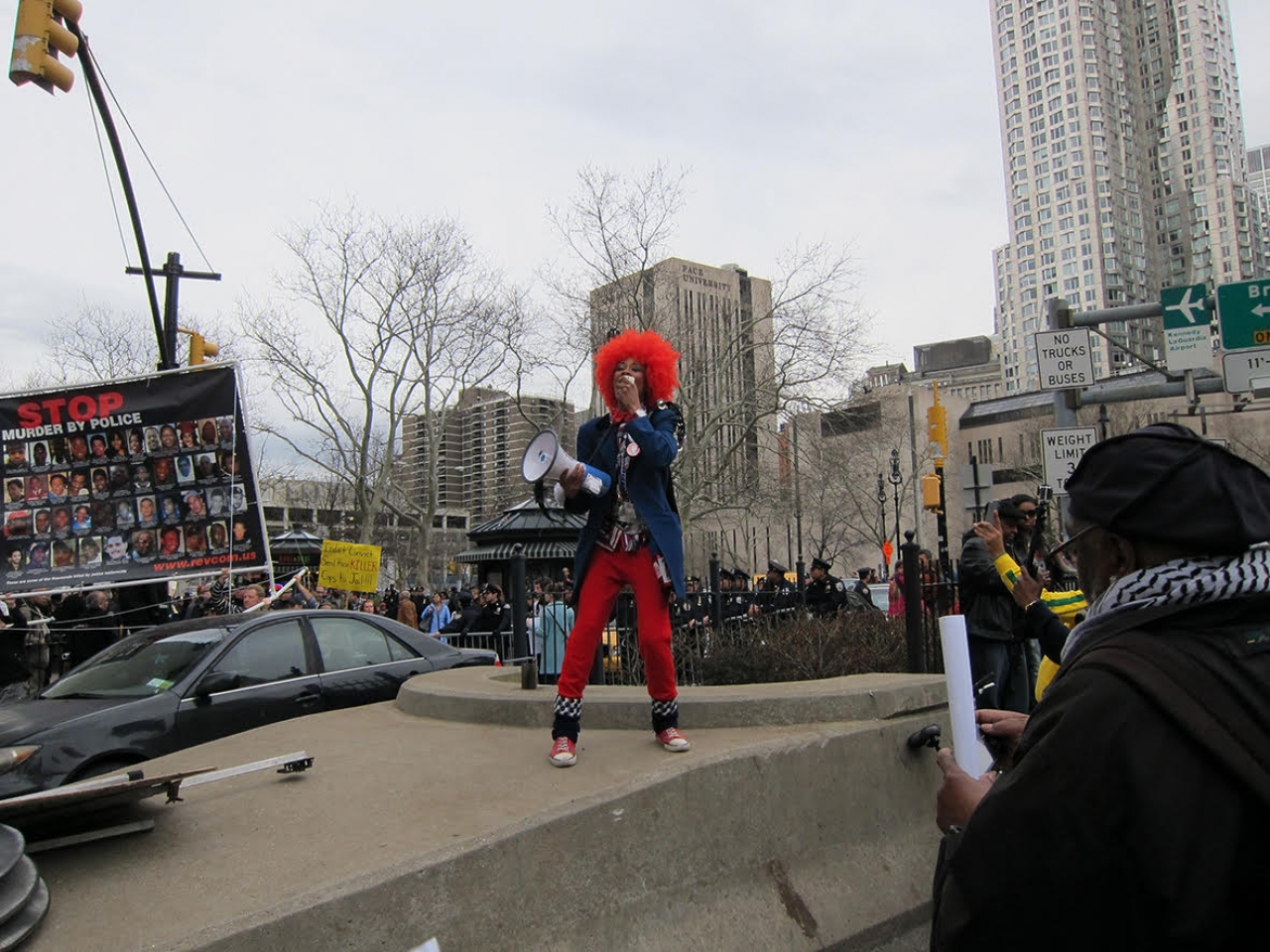 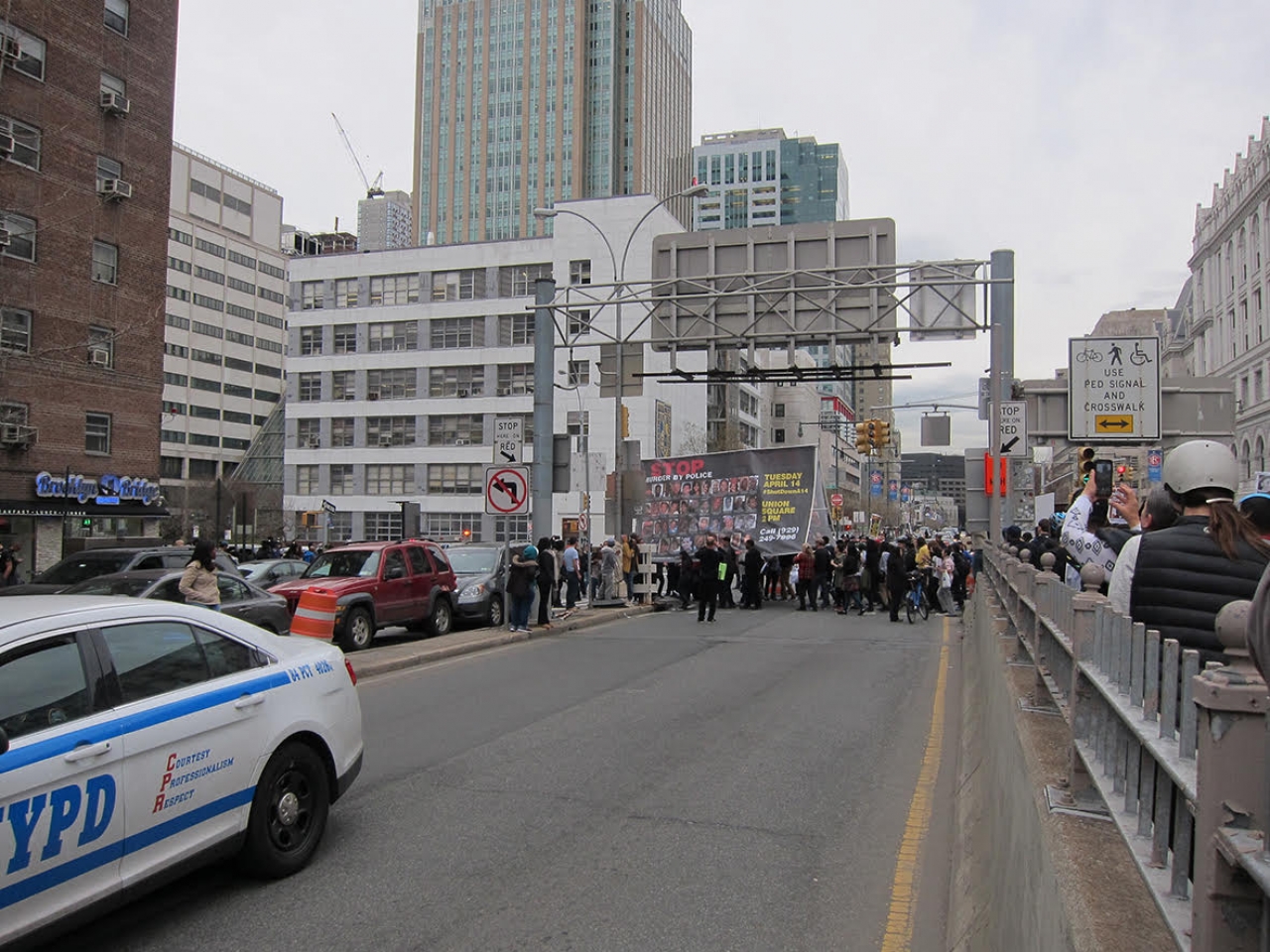 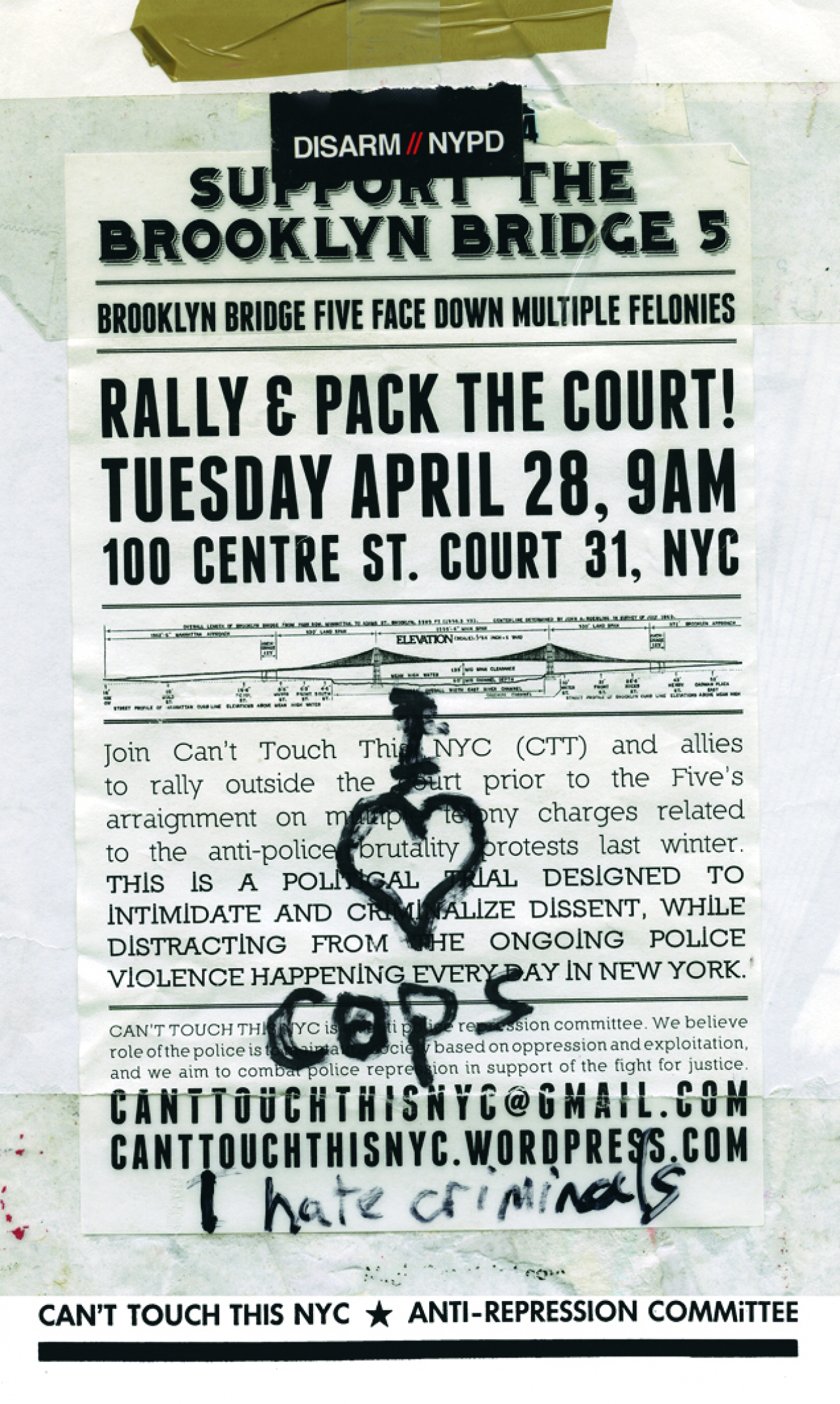 We had just seen the film Selma in the cinema, with original footage of Martin Luther King, who held a non-violent demonstration on the bridge near Selma, a demonstration that was violently suppressed by the police. Exactly 50 years later we are standing on a bridge in New York City, to protest against police violence and are surrounded by police.  We decide to take part in all the demonstrations against police brutality and racism here, and wherever possible to make our voices heard about this subject. 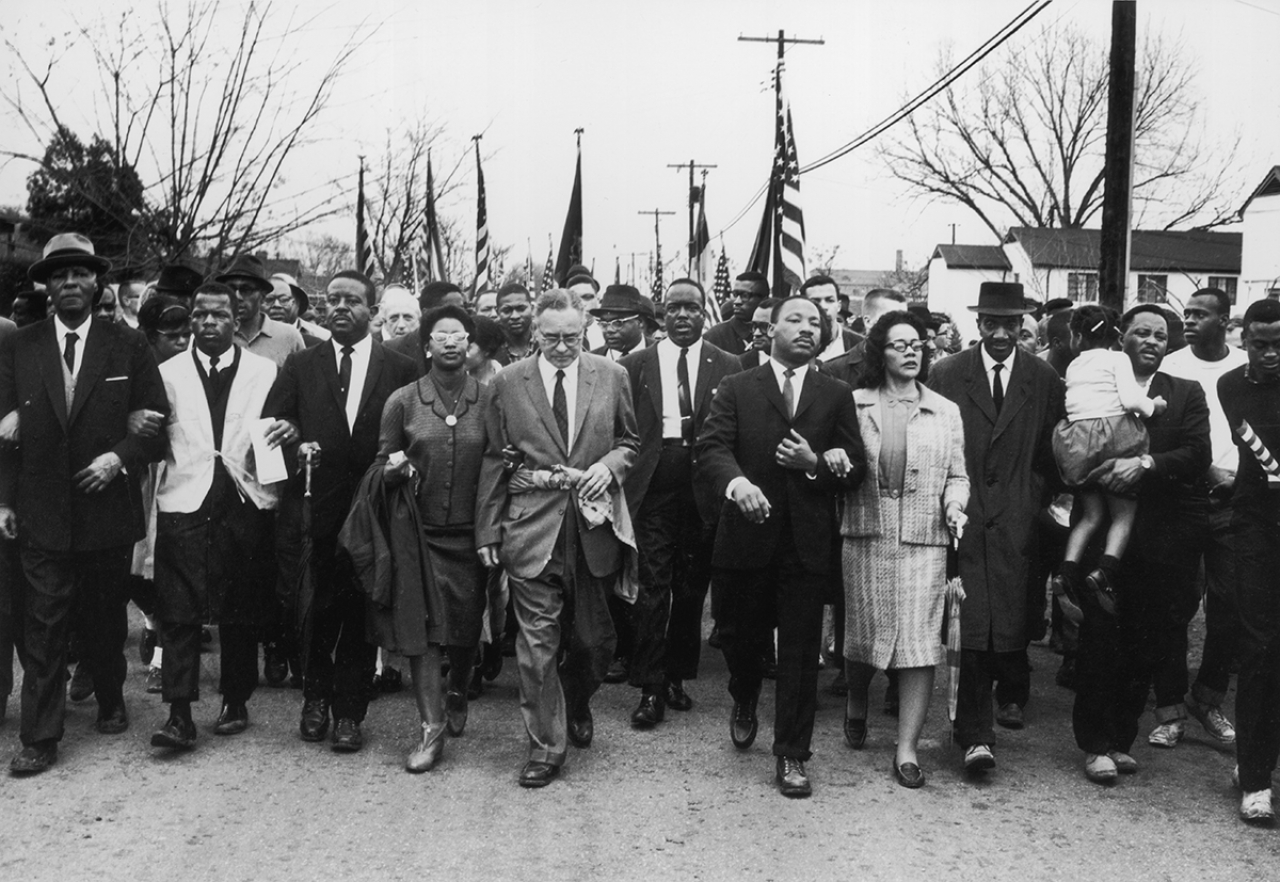 On 25 March 1965, Martin Luther King, Jr. led thousands of nonviolent crusaders to the completion of a 54-mile pilgrimage from Selma to Montgomery. 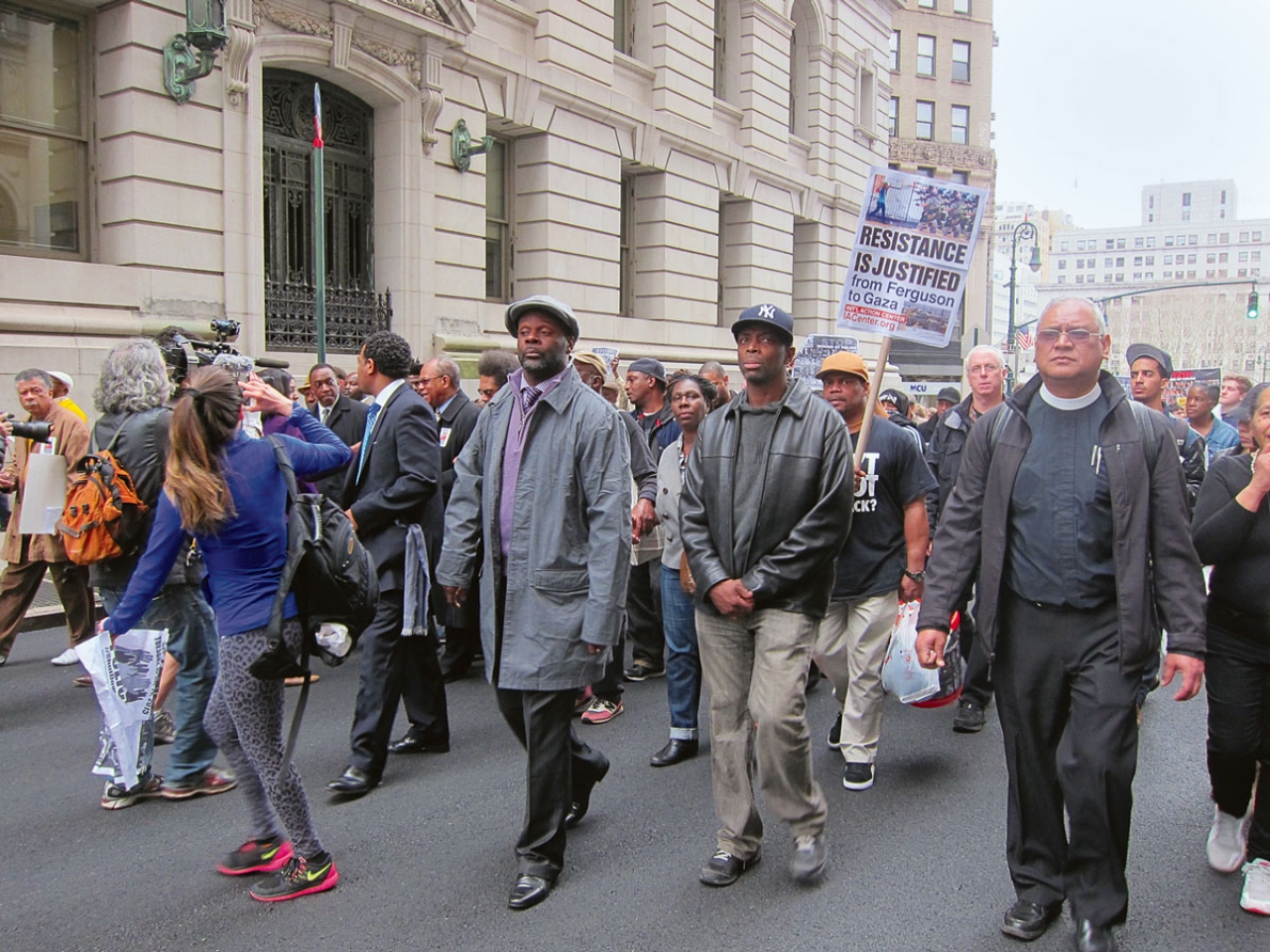 The New Yorkers who we’ve met here are all against the police brutality towards African Americans, but none of them takes part in the demonstrations and we wonder why they don’t. They want to but don’t actually do it is the answer when we ask. Perhaps they’re already so accustomed to race relations here, but we’re shocked because we’re seeing it with fresh eyes as Europeans?

We weren’t born and raised in the USA, so we don’t have the details of African-American history at our fingertips, which makes us poor discussion partners when it comes to debating the technical aspects. Yet when it comes to our inner convictions about equality, which cuts across history and every national boundary the message is the same: Equality, Now, Here, Everywhere and for Everyone. Period.

A clear-cut division is palpable here. We feel much whiter than we do in Amsterdam, and
we’re not used to thinking in terms of ‘black people’ and ‘white people’. It also feels strange
and unnatural to be characterizing it like this. 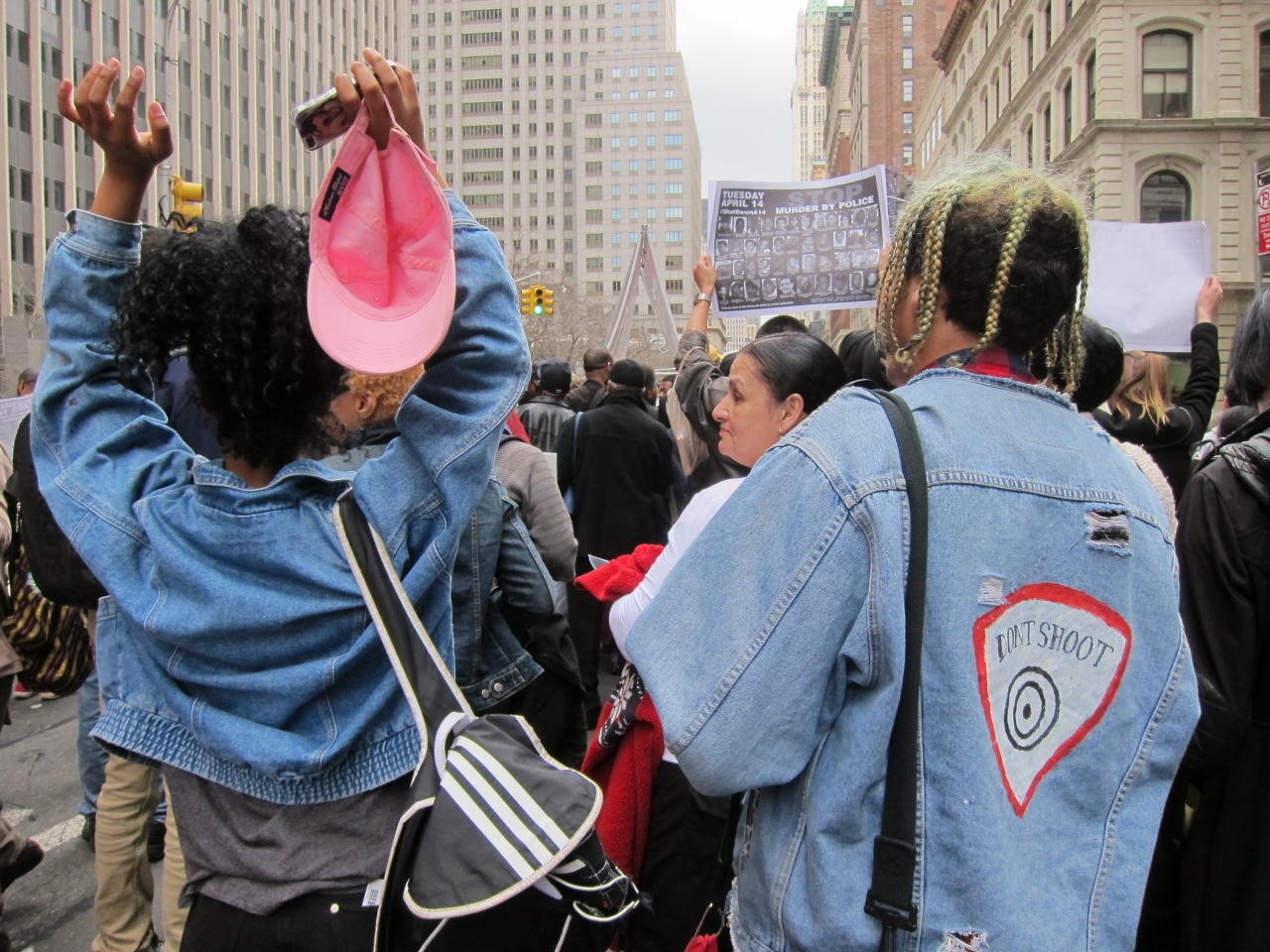