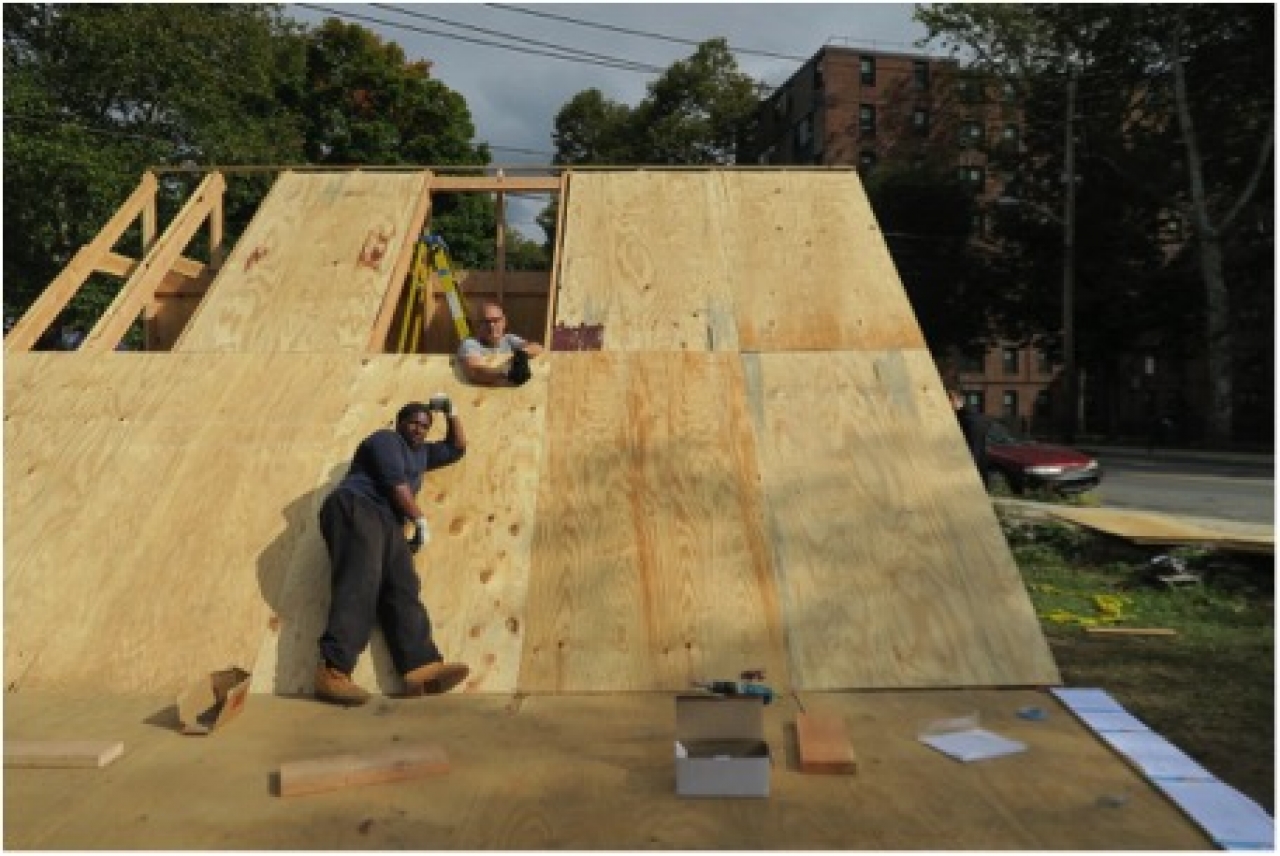 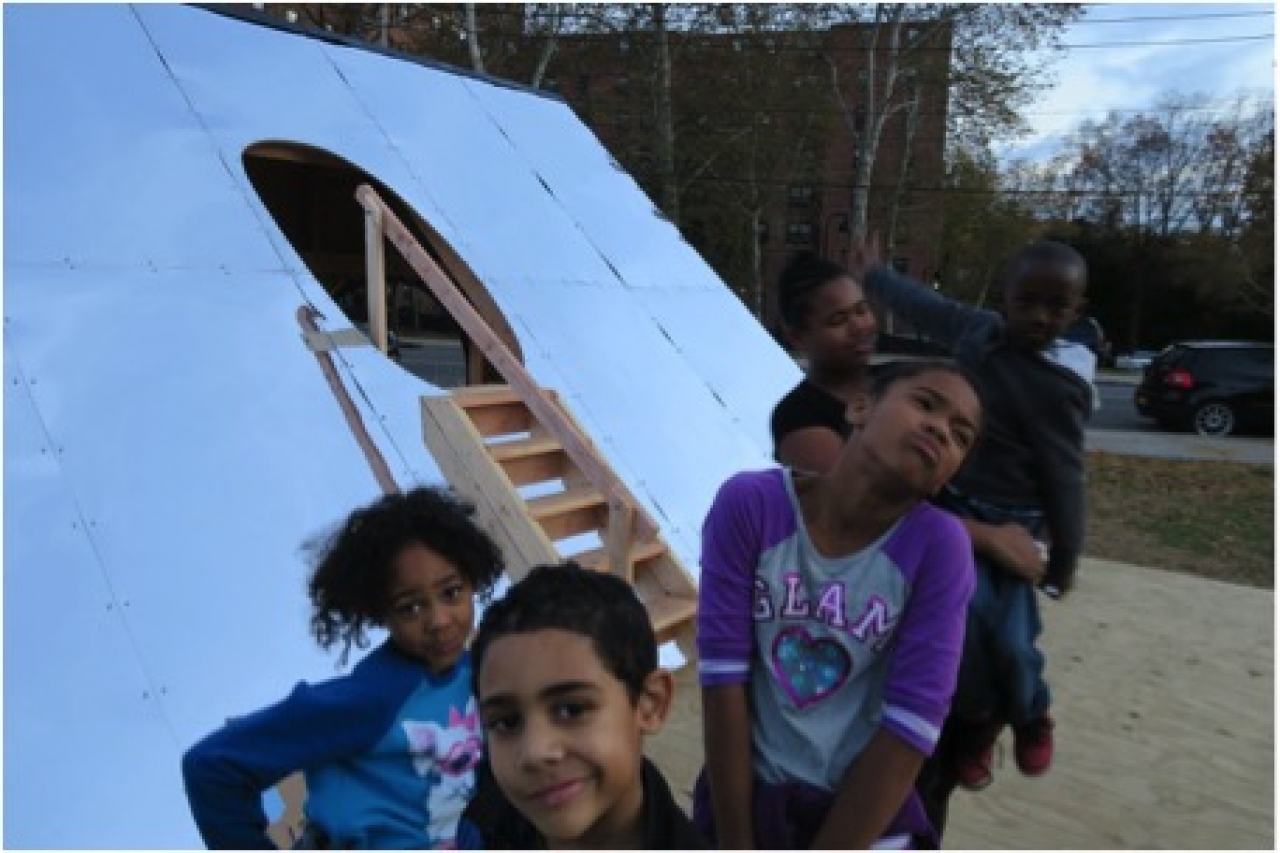 I’ve offered to go and stand in line for the food truck for one of our builders, so that he can carry on working. The queue is long because this is the special food truck which also has vegetables and fruit. These are the surplus from farmers that are oddly shaped and therefore cannot be sold to retailers, even though the quality is excellent. I’m a stranger in the queue and I feel I’m being gawped at, but most of them already know me from the works of art. So artists have it tough as well, someone comments.

Suddenly a heated discussion breaks out right in front of me between a Latino woman and an African-American woman, and I pick up that the Latino woman is constantly trying to jump the queue. The wait is an hour and for the whole hour it remains tense between the women.

Once I’ve picked up two big bags of crooked vegetables, I suddenly see everyone laughing and high-fiving. The queue-jumping woman has been given a parking ticket. People agree that this can only be karma.

Mishiba has gone to Washington DC today, for the Million Man March. It’s an important event that she’s been looking forward to for a long time. She wonders whether President Obama will join them.

Even though everyone has respect for the president, in Peekskill they are also disappointed in him, we notice. Perhaps the mess left by his predecessor was too great, or perhaps he lacked true power, or the expectations were too high? In Europe he is still as popular as ever. 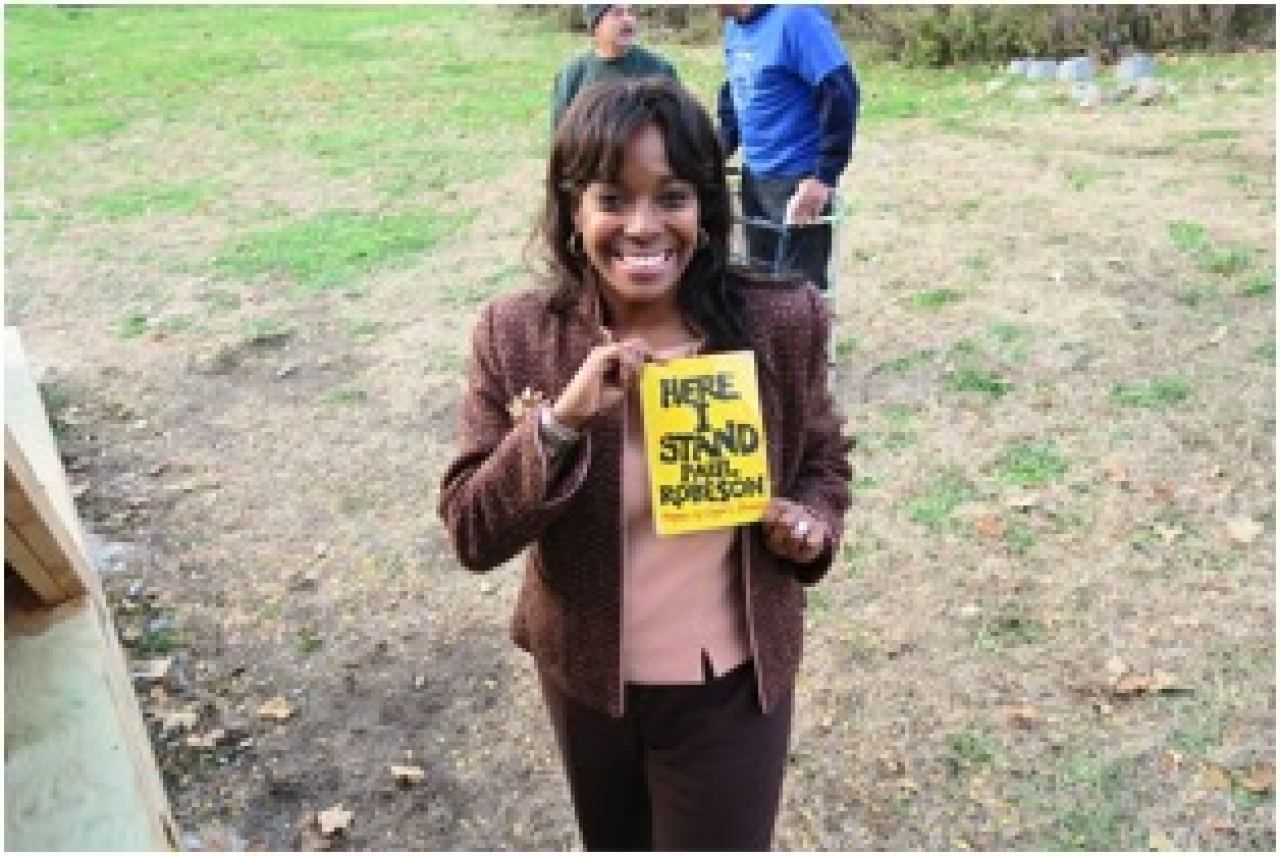 Mishiba with the Paul Robeson book. 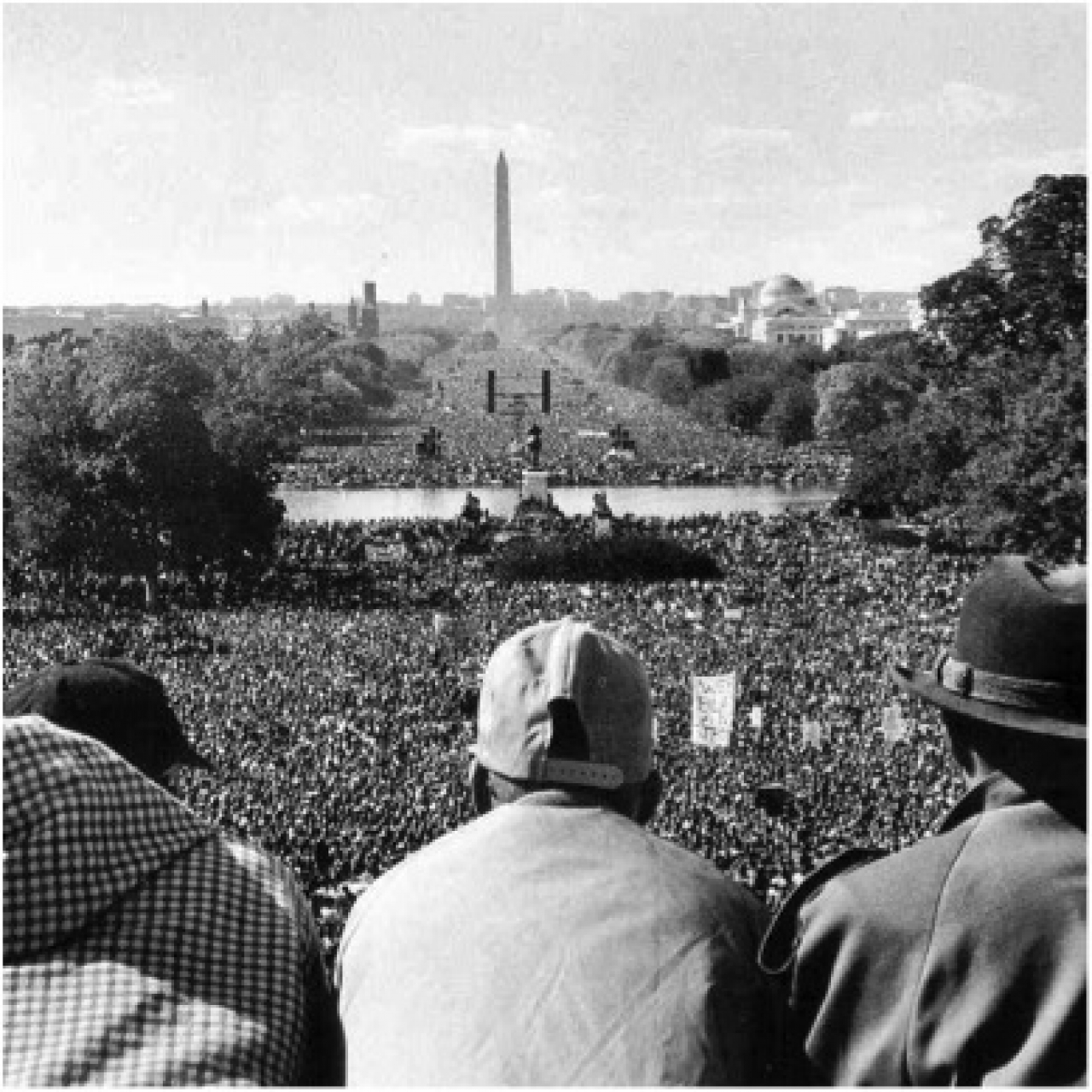 Donald Trump is now in the news every day with his remarkable statements. Perhaps his most bizarre idea is to construct a wall along the Mexican border to stop illegal immigrants, and he wants the Mexican government to cover the cost.

In Europe the refugee crisis is now at a peak, with thousands of refugees arriving in Greece every day. The German police federation has proposed building a wall on the Austrian border, Austria wants to build a wall on the Slovenian border, and Slovenia has raised a fence along the border with Macedonia. In the meantime the weather is worsening and families are camping in the mud at the Slovenian border. Parents try to get through the barbed wire with their young children to cross the border. The images on the news are heartbreaking. 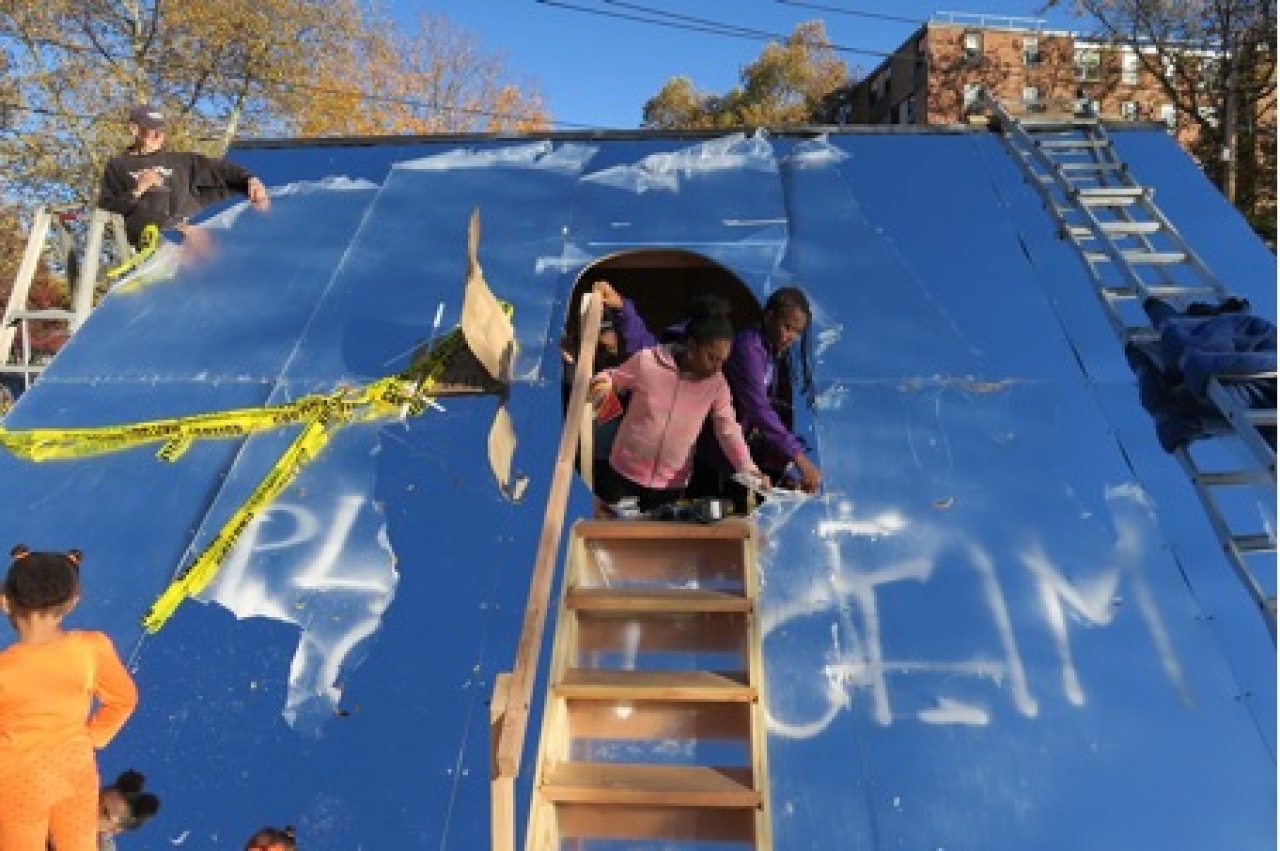 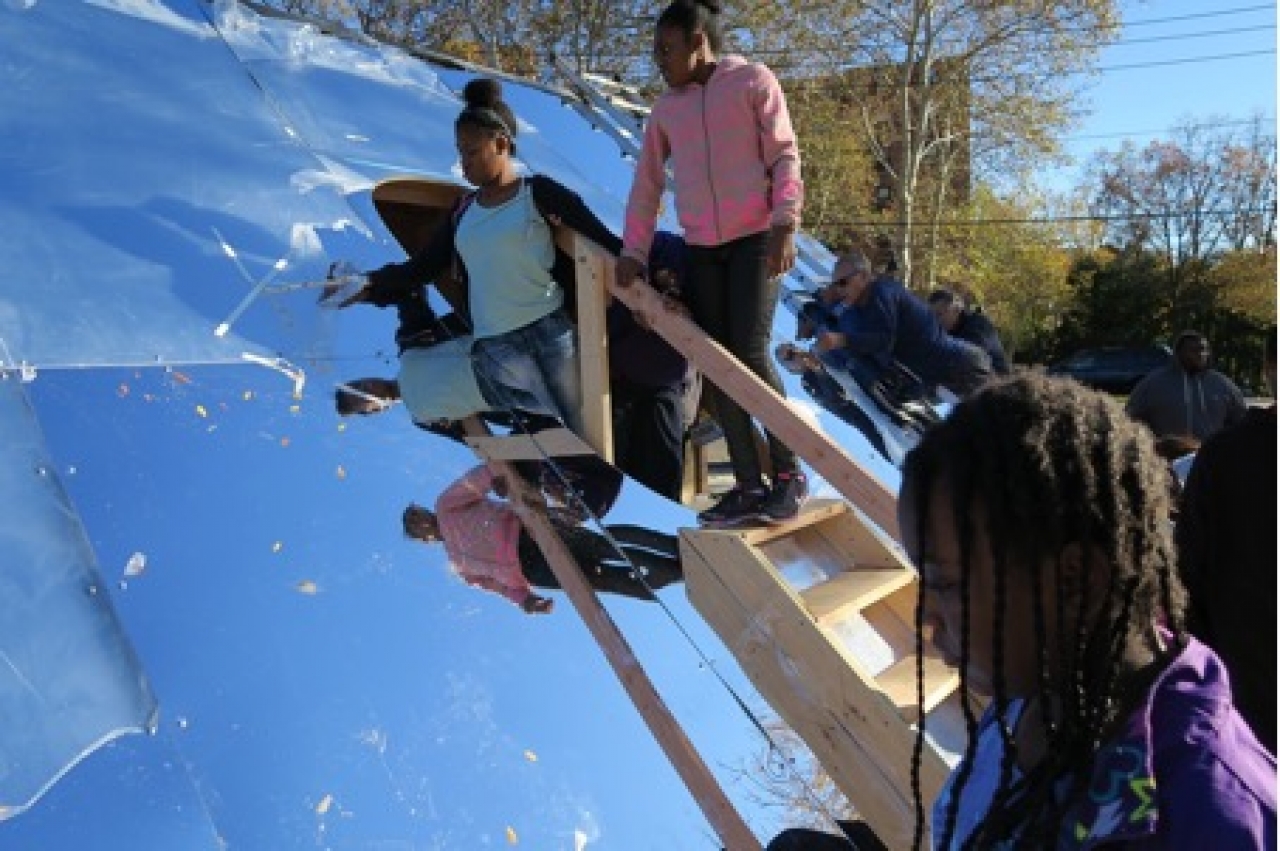 Last days of construction work at the ‘Paul Robeson Stage’, with local helpers.

Meanwhile in Peekskill, George is sawing two round holes as passageways through the structure and we complete the ‘safe house’. All we need to do now is paste the poster to the front. This was created by six youngsters from the Peekskill Youth Bureau, with our help. They were the first to react to our appeal on the flyers. In a four-day after-school workshop they created a ‘welcoming’ photo for passers-by with us. They feature in the photo themselves, standing like a reception committee on the Youth Bureau’s stage.
The photo also shows two placards: one with ‘LOVE’ and one with ‘AIR’, as the two essential necessities for everyone’s life.

In the background there is a portrait of Rosa Parks, the famous African-American civil rights activist who in 1955 refused to stand up for a white passenger on a bus. She was then arrested for civil disobedience and breaking Alabama’s segregation laws. 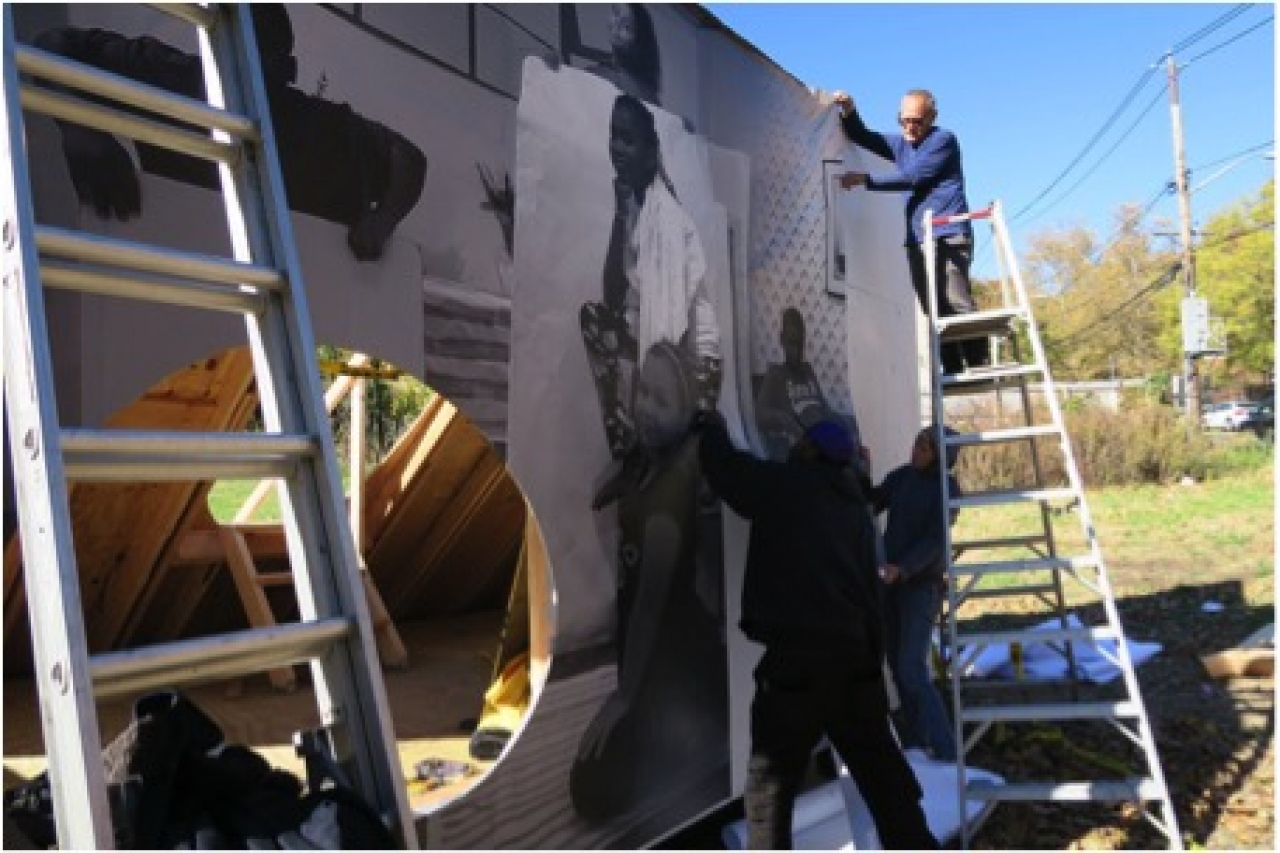 Pasting the poster on the billboard side of the stage. 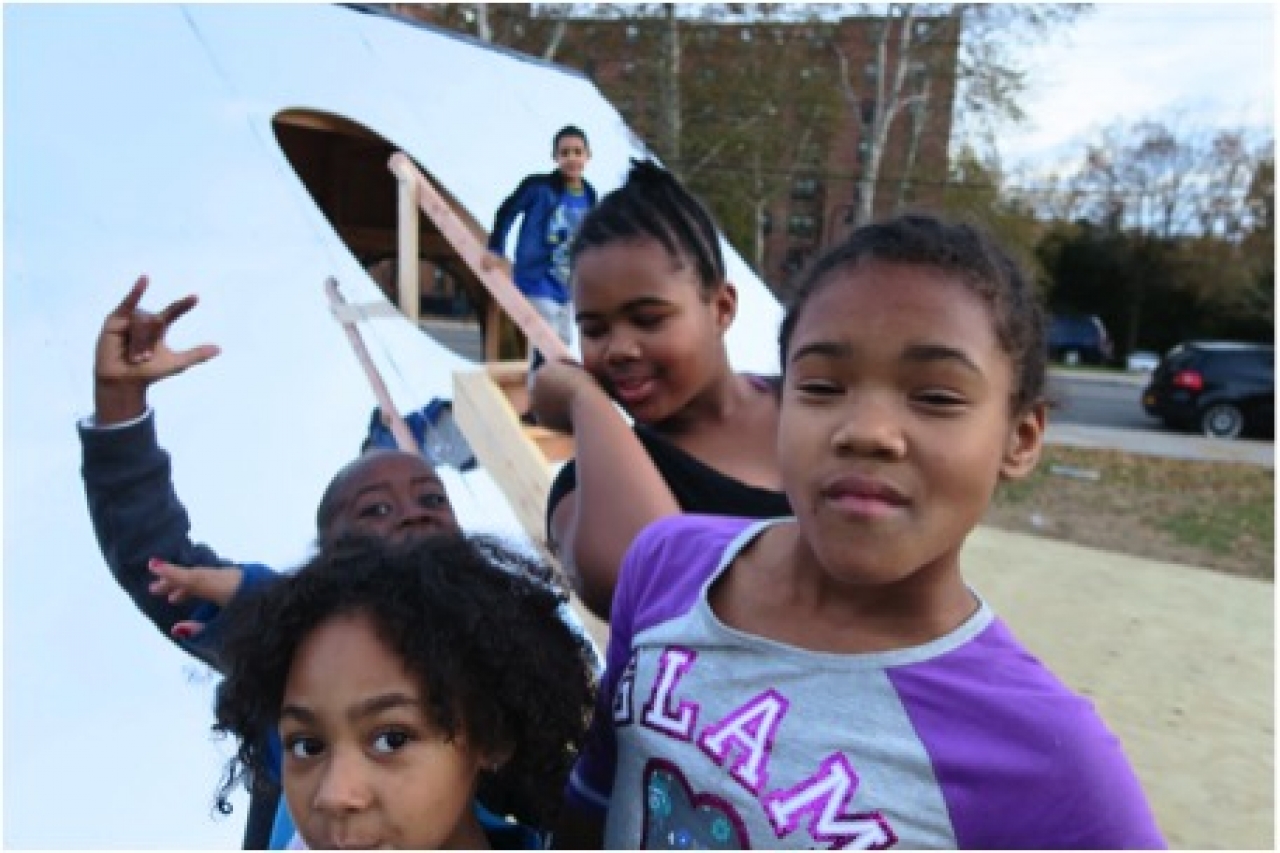 A couple of months ago I was at a police station here in New York to report the misuse of my credit card. The form I had to fill in didn’t just ask for my name, date of birth and nationality, but my ethnicity as well. It was the first time in my life that I’d been required to provide that information, and I was angry about it.

Tonight we’re staying with Meredith and Todd Harte. Meredith saw us busy with the construction process yesterday and offered us tea and biscuits. She then offered us a place
to stay, so that we didn’t have to return to New York by train after a long day’s work. We’re welcome to stay in their charming wooden house whenever we want. 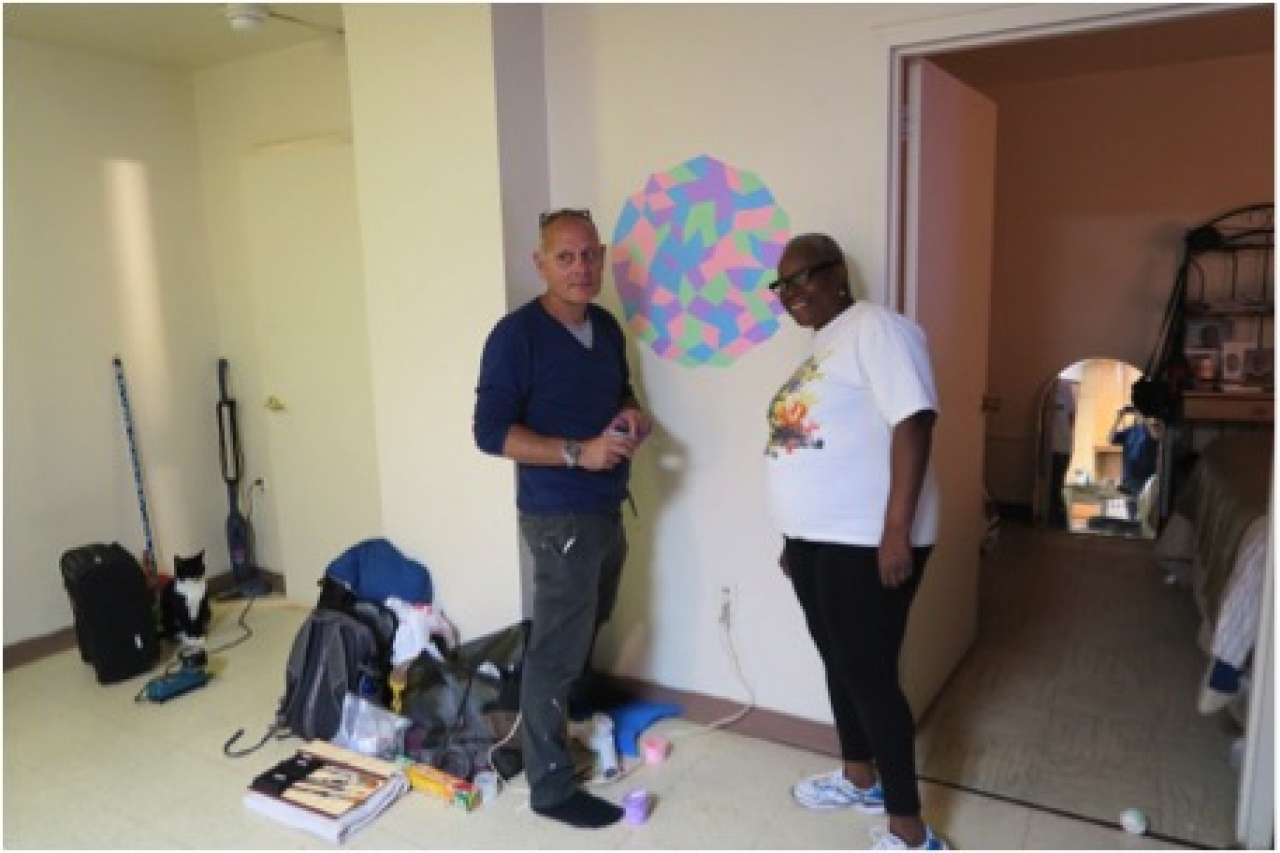 We’re busy working at Maureen’s apartment and this is the very last day of painting in Bohlmann Towers. We’ve enjoyed it so much that we think it’s a shame it’s coming to an end. At Maureen’s place we also feel hugely welcome. While throwing the dice and painting we eat papaya and she puts on gospel music for us. Her cats Jacky and Elvis purr as they sit there watching. The painting has a special significance for Maureen, who witnessed how it emerged throughout the process. As all the sections are different and unpredictable in their colour and shape, your eye cannot gain a grip and the panels of colour seem to escape repeatedly. Maureen identifies with the painting and feels that for her the message is: “Whatever happens, they can’t box me in.”

The painting also helps her in a very practical way. She has been trying to quit smoking for a long time, and because she doesn’t want the painting in her living room to get dirty she will now only smoke in the bedroom, so she’s smoking much less. She now calls the bedroom the ‘sin room’, and if she can manage it she will stop smoking altogether. She has made an attractive little table to place underneath the painting, on which she has placed her Bible study books and dried roses in a glass. It’s like a little altar.

She says that she has spiritual experiences with her painting, which she calls ‘annunciations’. It touches us deeply and we are genuinely moved that art can evoke such
a response. 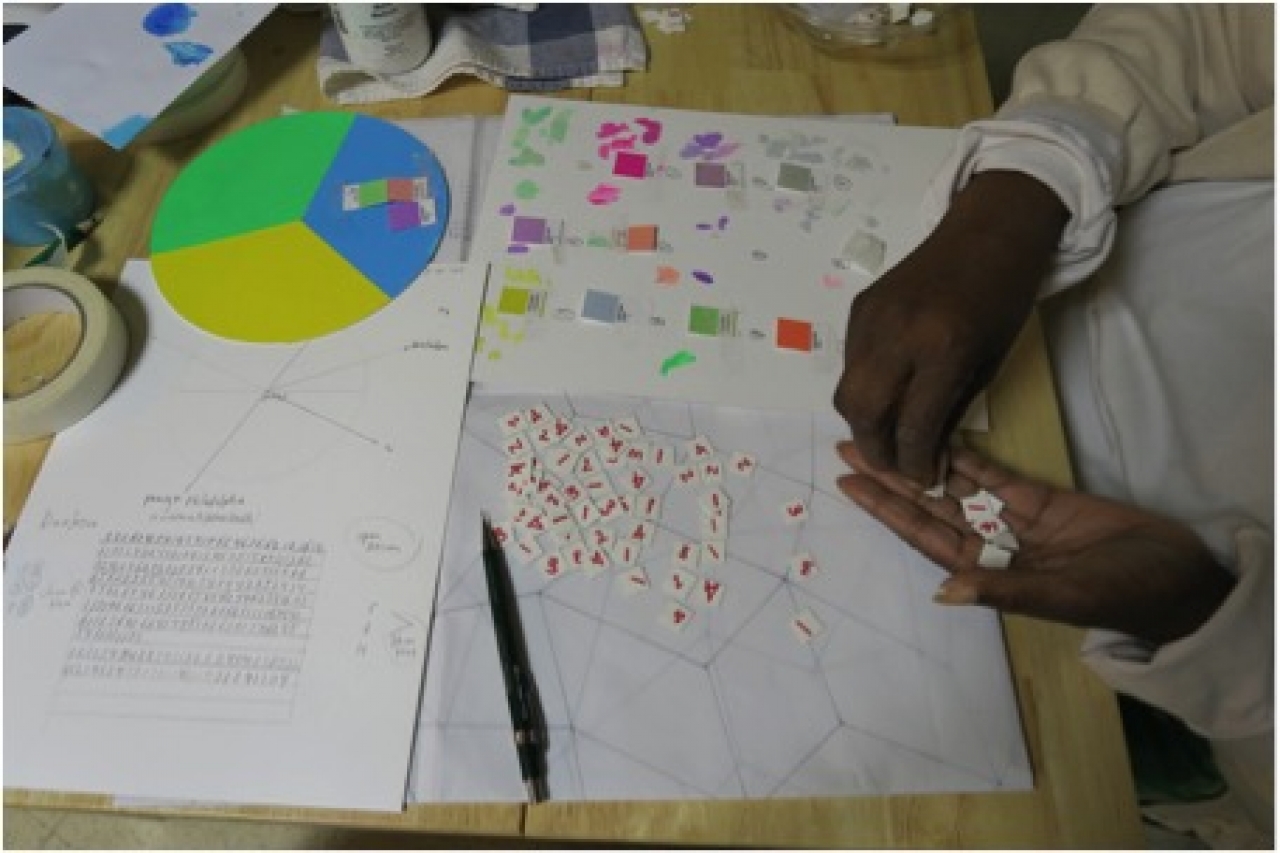 Maureen, blindly picking colors and measurements for her painting. 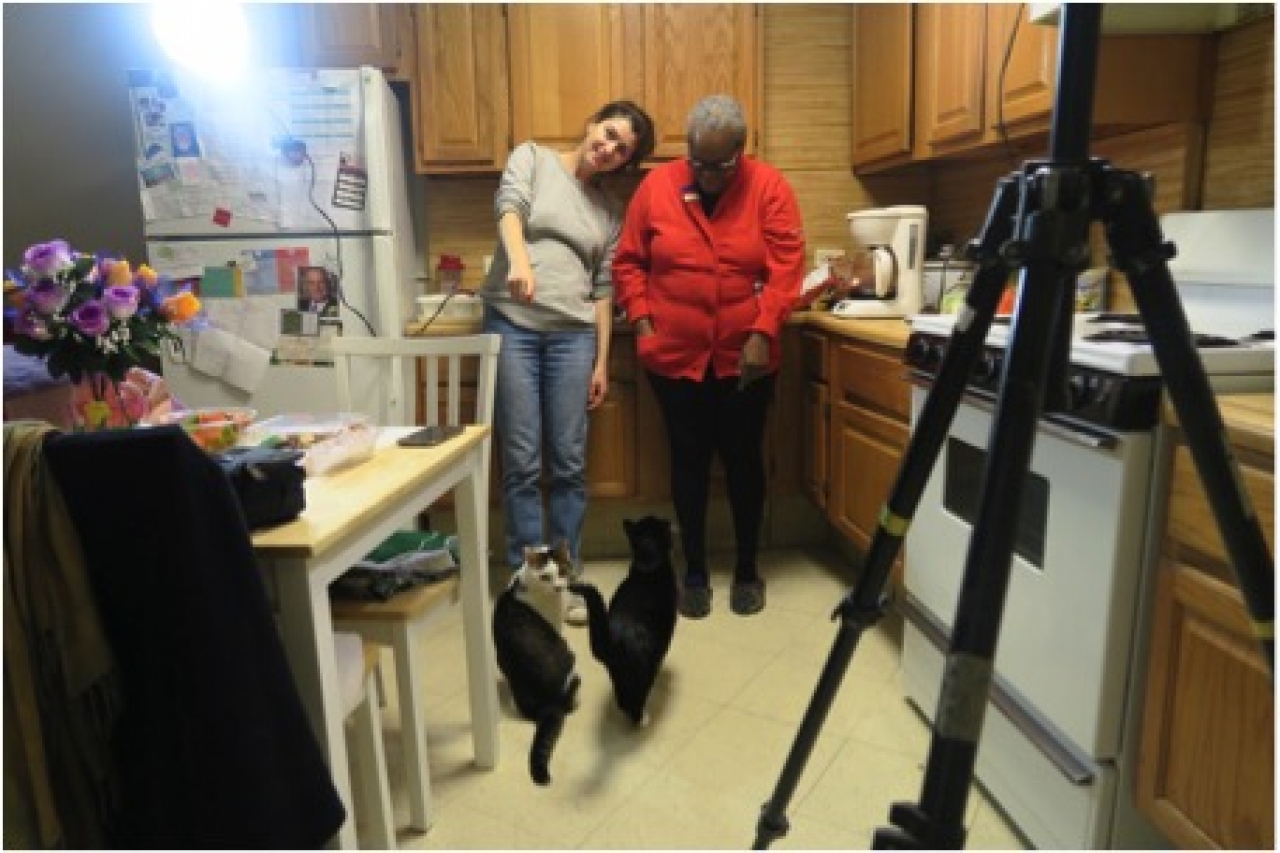 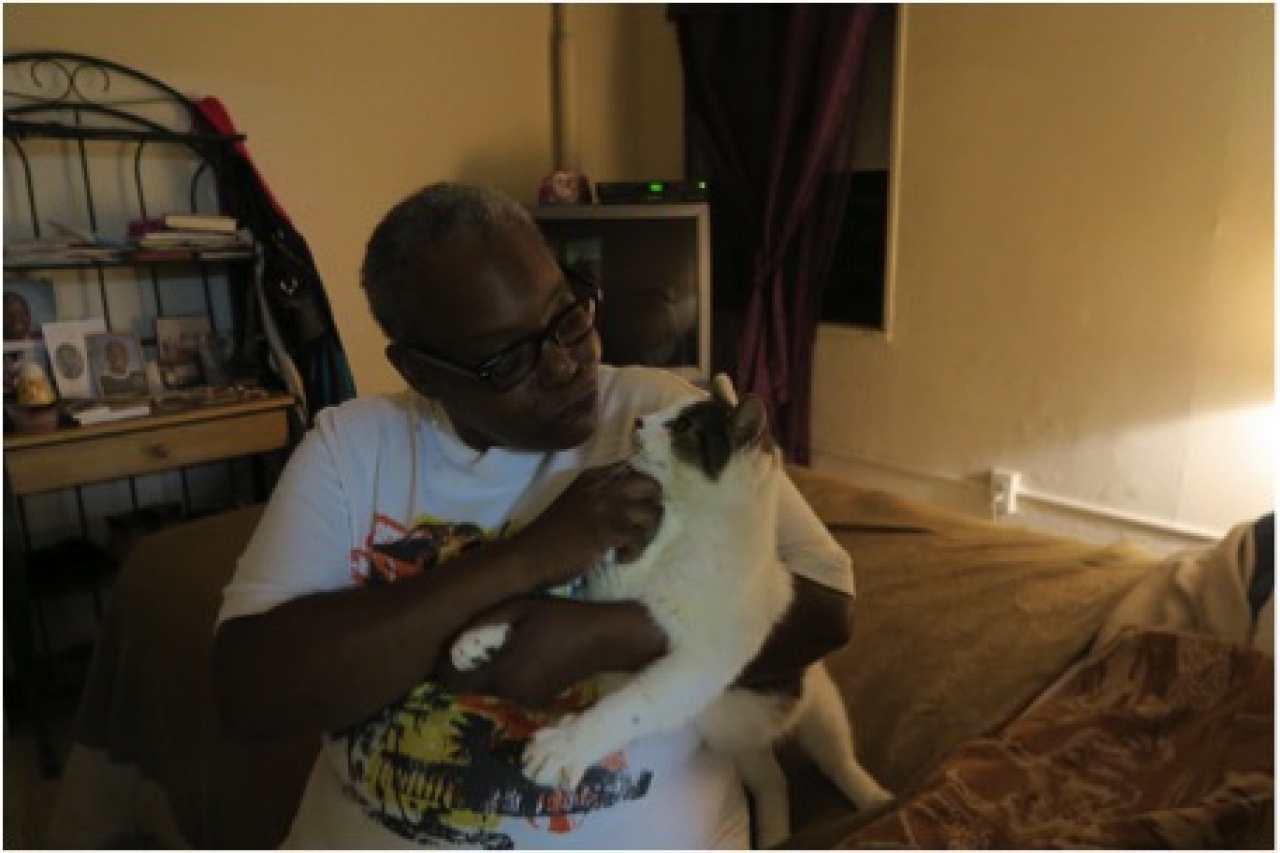 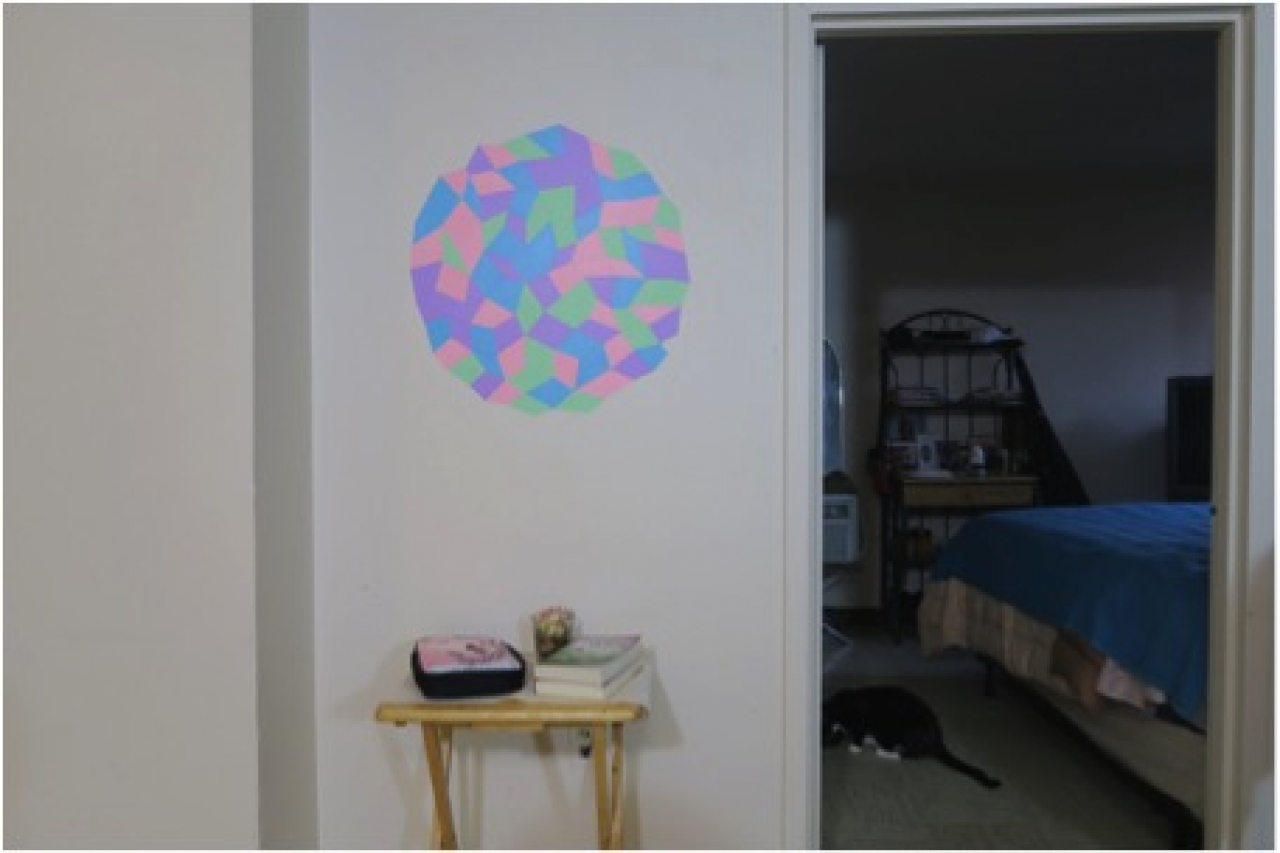 Saskia getting a new hairdo for the opening of the Paul Robeson Stage. 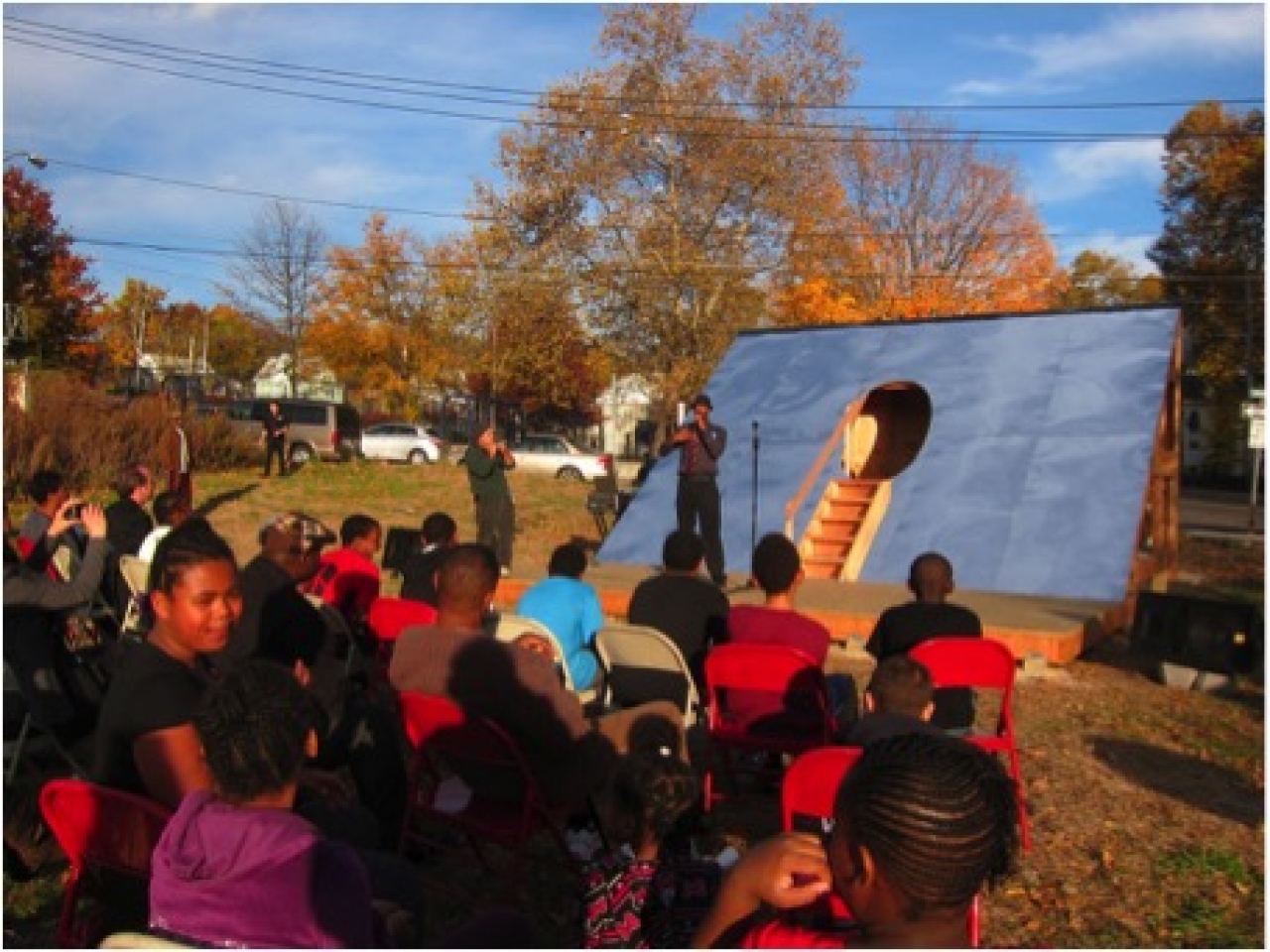 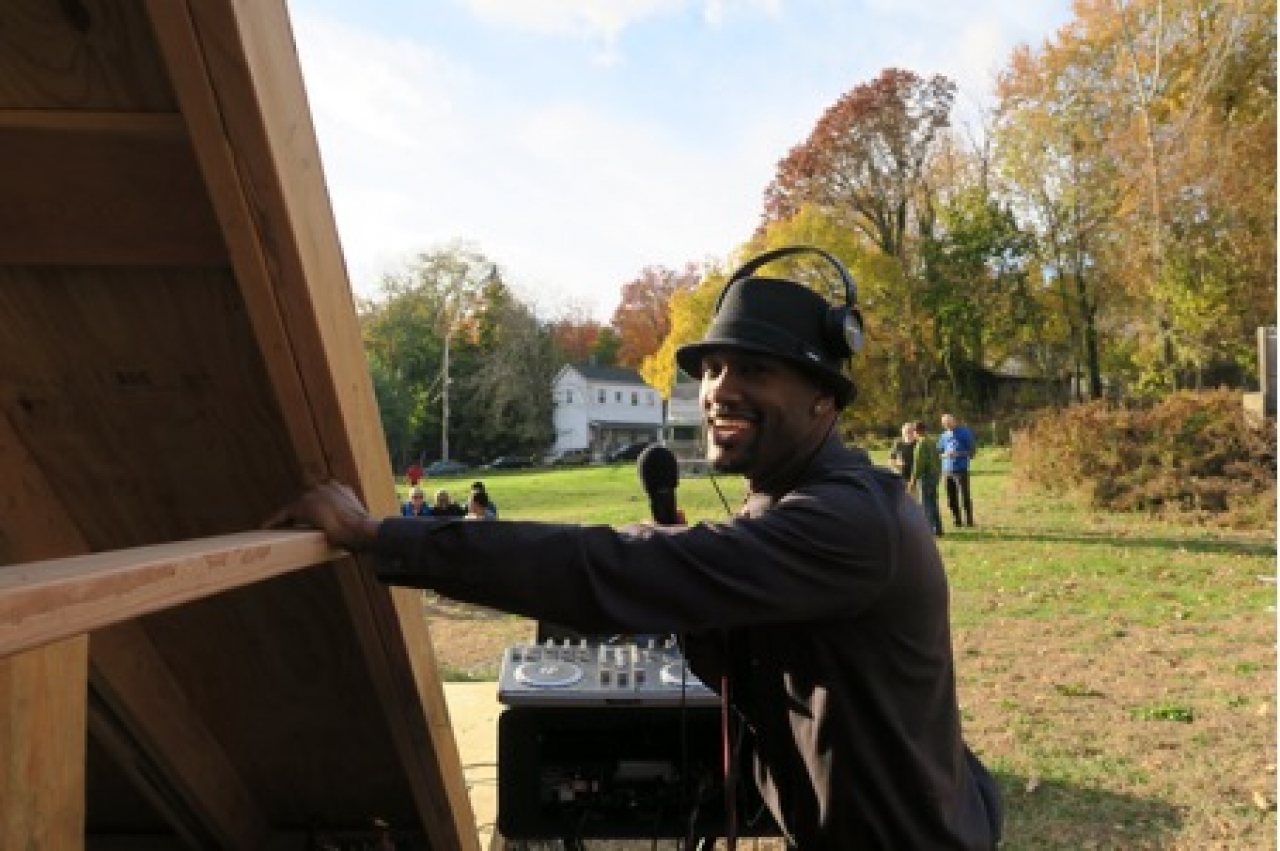 Today is the stage’s official opening. Ms. Rainey’s grandson, André ‘Noodle’ Rainey, is the groovy and charismatic MC and has set up chairs and a sound system next to the stage. Anasia and Anastasia from the Youth Bureau punch their way out of the round hole covered with paper and giggle their way through a short opening speech. The large mirror reflects a clear blue sky as a backdrop for the line-up of local performers: musicians, singers and poets, interspersed with moving speeches by Emerson and Wilfredo.

The full-page article has been published in The New York Times and, very creditably, includes a photo in of Emerson next to his painting. It’s a great day to celebrate our cooperation and from today the stage officially belongs to the neighbourhood.

On 5 December, Noodle will organize a grand neighbourhood party with a three-hour musical programme performed by local artists. 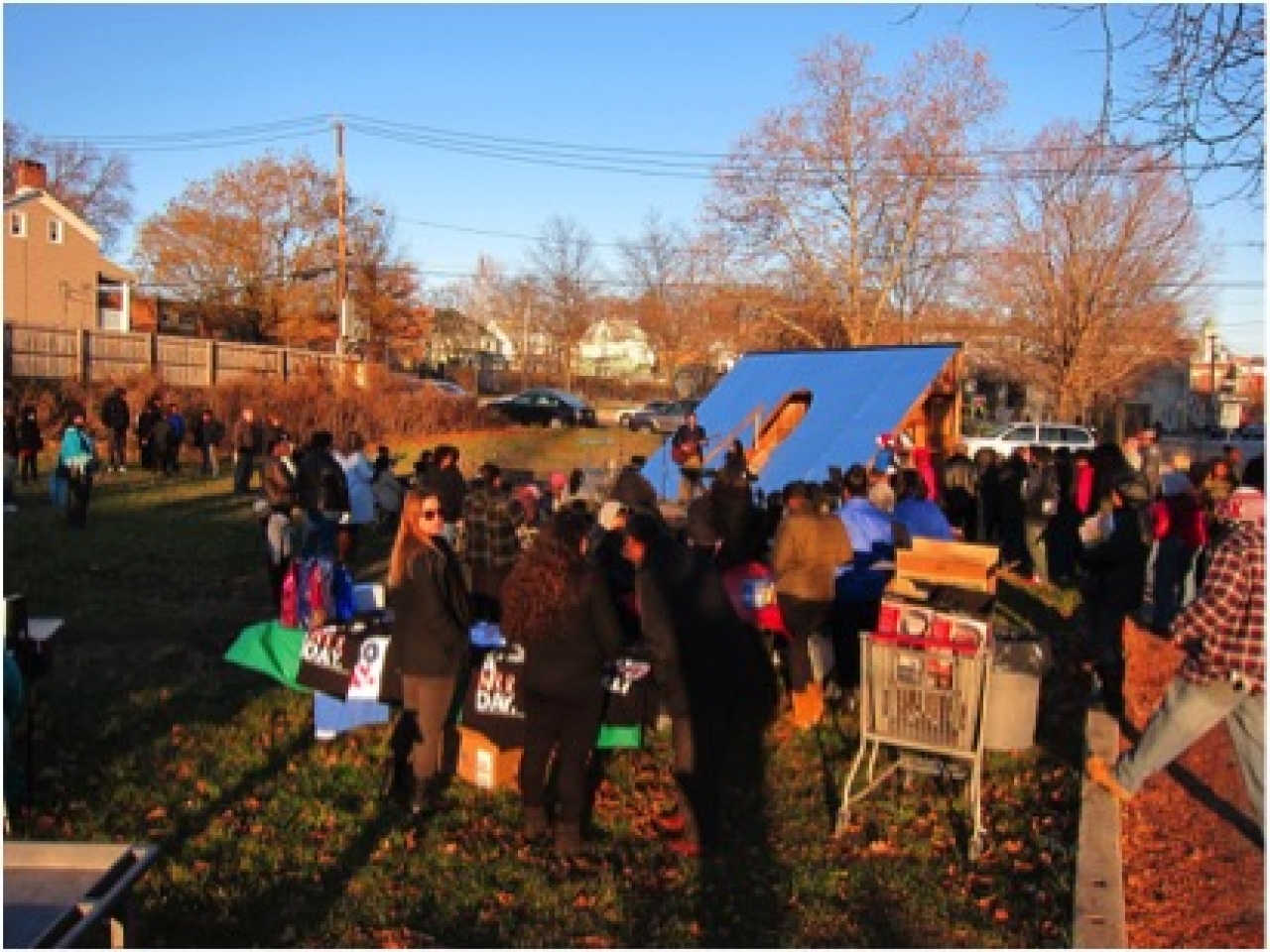 Today it’s Thanksgiving and we’ve been invited to the Rainey family’s home. We feel
honoured. We’ve never experienced Thanksgiving before and we have no idea what to expect. It’s convivial and packed with family and friends. Neighbours pop in and out and there are huge amounts of homemade traditional food. We’re sitting in the living room in a circle and take turns to state what we’re grateful for at this moment in our lives. We think it’s a beautiful and touching ritual to say that out loud in the midst of your loved ones.

We’re deeply grateful that we’re here, with this hospitable family that doesn’t really know us but was nevertheless willing to share this day with us. And we’re grateful for the time we’ve spent in the homes of strangers here in Peekskill over recent months.

After this serious moment it’s time for food and the presents game. We take turns throwing a dice and whoever throws a six is allowed to choose a wrapped-up present from the stack. And as the evening drew in we started dancing, a dance-off that was far and away the most difficult part of the day for these European artists with two left feet.

On our way home we think back to how we initially had doubts about the title for our
project: Welcome Stranger. But we couldn’t have come up with something more appropriate.

This publication accompanied Saskia Janssen’s and George Korsmit’s Welcome Stranger project in Peekskill, New York, which was created for Peekskill Project 6 and commissioned by the Hudson Valley Center for Contemporary Art, 2015.

Welcome Stranger was generously supported by the Hudson Valley Center for Contemporary Art, the Consulate General of The Netherlands in New York, the Mondriaan Fund and the New York State Council on the Arts.