The opposite of love is not hate, but indifference. Indifference creates evil. Hatred is evil itself. Indifference is what allows evil to be strong, what gives it power.
Elie Wiesel 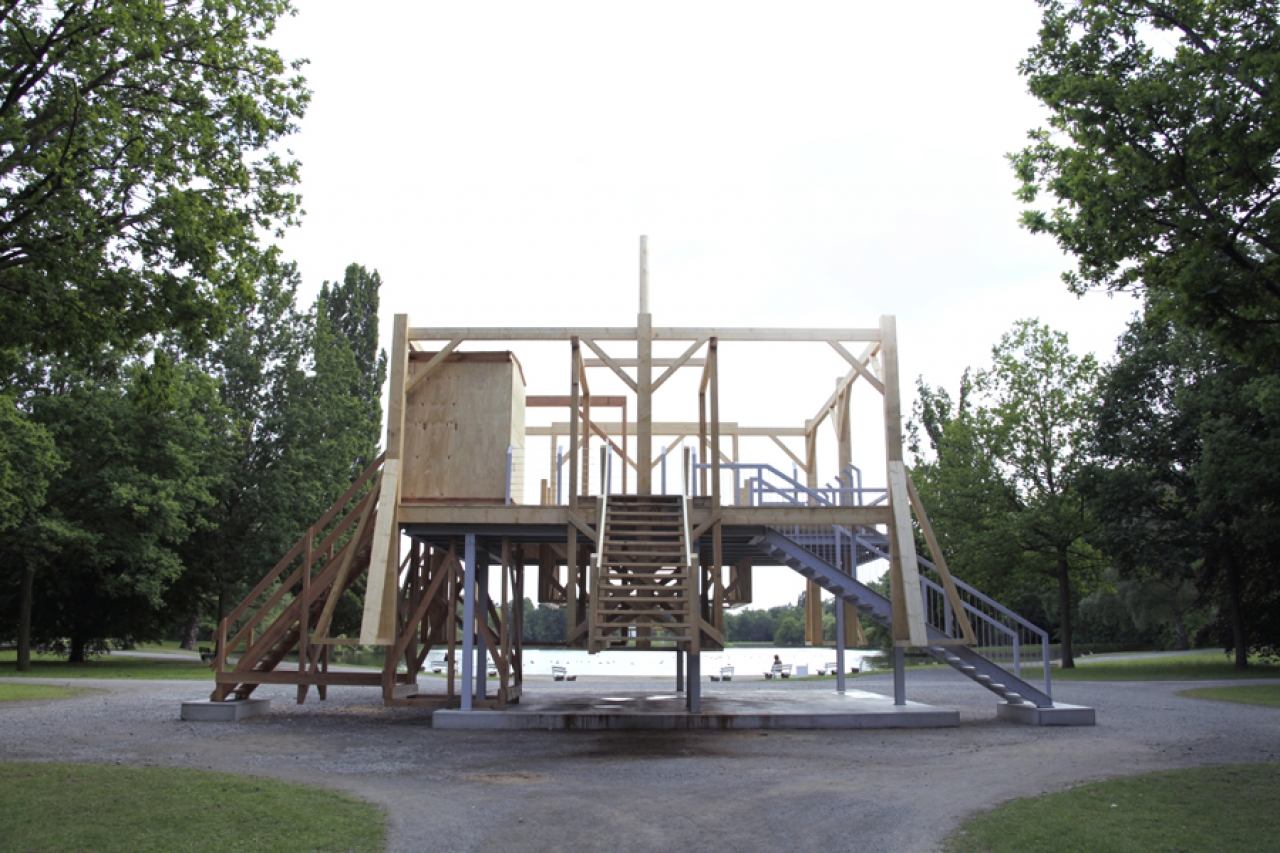 Because of the intricacy and complexity of this structure, it may not be immediately apparent as to exactly what its origins are or how it is to be used; while children use it as a play structure, adults, perhaps attracted by its architectural novelty can slowly discover its origins and meaning. While some might see a resemblance to constructions in an adventure playground from the 1970’s, the sculpture is actually made up of a combination of reconstructed gallows (or scaffolds as they were once called) that were used in executions of significance throughout U.S. history. Through this formal uncertainty there is an attempt to signify both the free play of childhood and the ultimate form of control, capital punishment. These seemingly oppositional tracks have come together in the United States in the last decade, resulting in what is known as “the School to Prison Pipeline.”^1
The reconstructed gallows are built on top of and into each other to form a single, integrated unit. The different gallows are arranged around a center point and stacked one on top of the other, so that the deck of the most recent gallows forms the bottom layer with each successive layer built up chronologically. The viewer can explore the structural aspects underneath the deck while children have ready-made climbing frames. Visitors can then access the platform via two staircases where factual information about the project can be found.

The gallows used in the sculpture represent a range of executions, some nearly iconic, beginning with John Brown in 1859 and culminating in the scaffold used in Saddam Hussein’s hanging in 2006.^2 There is no intention of directly equating the victims of the various executions or of making equivalencies between the activities that led to their deaths. The only consistency implied in the project is that they are all State sanctioned executions. Some of the other gallows represented include the last public hanging in the U.S. in 1936 attended by tens of thousands as well as the 1996 execution that became the last death by hanging in the United States. 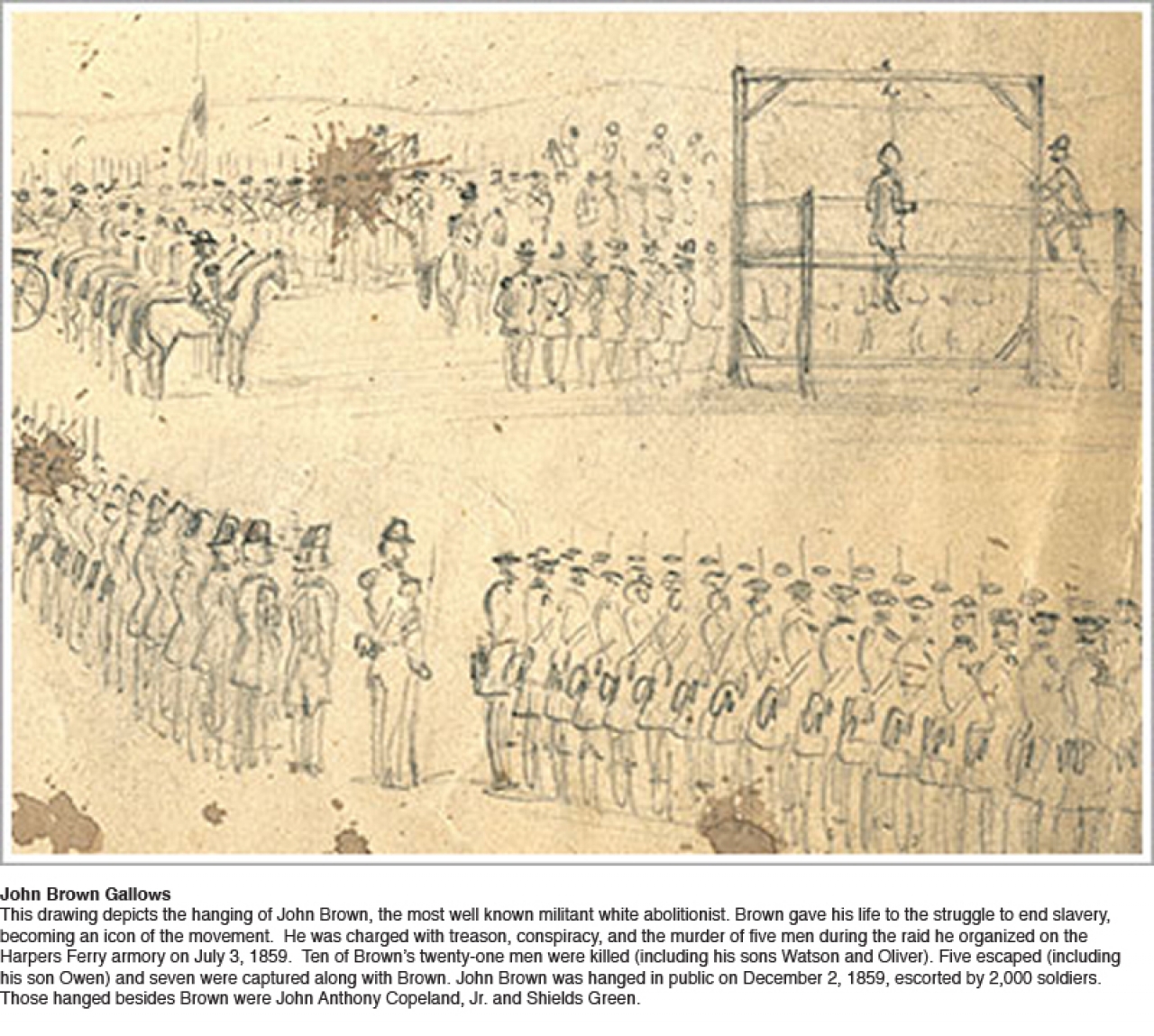 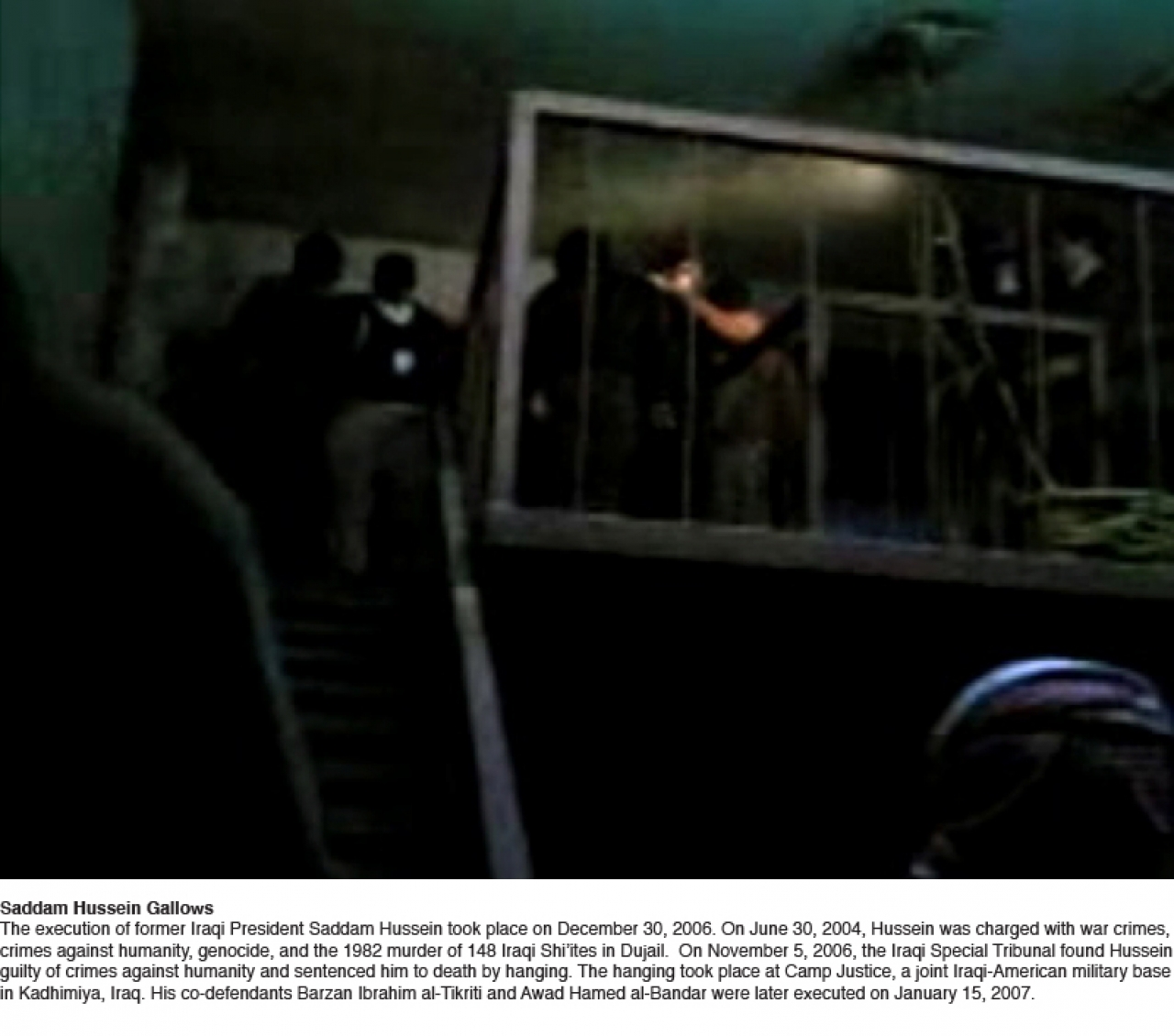 The United States has a long history of executing prisoners dating back to its founding settlements and unlike Europe the death penalty is still in practice today. Hamida Djandoubi was the last person put to death in Europe before the continental moratorium on executions took effect in 1977. Perhaps ironically, 1977 was also the year that saw the United States execute Gary Gilmore, the first execution after a brief moratorium period.^3 Since its 1977 re-instatement capital punishment has become a popular issue in U.S. society and has come to be intertwined with “tough on crime” hardline penal policies.^4 This lethal conjunction has led us to the position of having more prisoners than any country in the world by an enormous margin while being the only “western democracy” still employing the death penalty. The following responses to Saddam Hussein’s execution in 2006 put the different views of capital punishment between the U.S. and Europe into sharp contrast. “European Commissioner for Development and Humanitarian Aid Louis Michel declared: ‘One cannot fight barbarism with means that are equally barbaric. The death penalty is not compatible with democracy’. […] British Foreign Secretary Margaret Beckett stressed that her government ‘did not support the use of the death penalty in Iraq or anywhere else’. […] American President George W. Bush hailed the news of Hussein’s death as an ‘important milestone on Iraq’s course to becoming a democracy…’.”^5

Because of its use in lynching, death by hanging has a particular significance in the United States. It can be understood as a racialized form of execution in a way that no other method can.^6 This historical connection between capital punishment and race is more evident today than ever with the grossly disproportionate application of the death penalty to African Americans. Not surprisingly it is the southern states that continue to carry out the majority of executions today.^7
There are several arguments for the abolition of the death penalty, among them is the fact that capital punishment does not reduce or prevent crime. The death penalty is known to be the least effective form of punishment by law enforcement and criminologists. It is more expensive to kill a prisoner than to keep him in prison for life. It is applied disproportionately to people of color, the poor and the uneducated. And perhaps most damning of all, it has been proven that innocent people have been executed through wrongfully convictions. The United States is the only “western democracy” that currently employs the death penalty, joining China, Iran, Pakistan, Iraq, and Sudan as the world leaders in executions.^8 It continues to execute juveniles: the first child killed on the continent was in the Plymouth Colony in 1642 beginning a grisly tradition in American jurisprudence.

Capital punishment is a highly contentious issue in the United States, although public opinion polls show that the majority of Americans favor life without parole over the death penalty. In spite of this the US media rarely covers arguments for abolition of the death penalty. In this climate it has become virtually impossible for any politician to campaign against it. George Ryan, the former Republican Governor of Illinois is a particularly chilling example. Governor Ryan was a conservative Republican elected with a strong “law and order” position. However, after a number of prisoners on Death Row were exonerated based on new evidence showing them to be innocent he placed a moratorium on capital punishment in Illinois.^9 For this act of common sense not only was he not reelected, after he left office he was subjected to a systematic campaign of politically motivated legal harassment. Ryan’s case was a clear message to other politicians about the dangers of taking on capital punishment. Even liberal Democrats must advocate hard line policies if they expect to get elected. Supporting the death penalty has become the accepted code for a “tough on crime” platform.^10 Politicians from both parties play on the citizenry’s irrational and disproportionate fear of crime. Lurid fantasies of rape, murder and mayhem are trotted out to predictable results.^11
We now know that one in one hundred U.S. citizens are in jail and one in nine African American men are in prison. More young African American men are under the control of the criminal justice system than are in college. We are increasingly criminalizing our youth and militarizing our primary and secondary schools in what has become known as the “school to prison pipeline”. The nation leads the world in the total number of prisoners by a wide margin and prison spending outpaces education in many states. We know that innocent people have been executed and that there are many potentially innocent prisoners sitting on death row today.^12 It is to this context that Scaffold is addressed.

For the next year Scaffold is in the Hague. People can send an email to STROOM to participate. 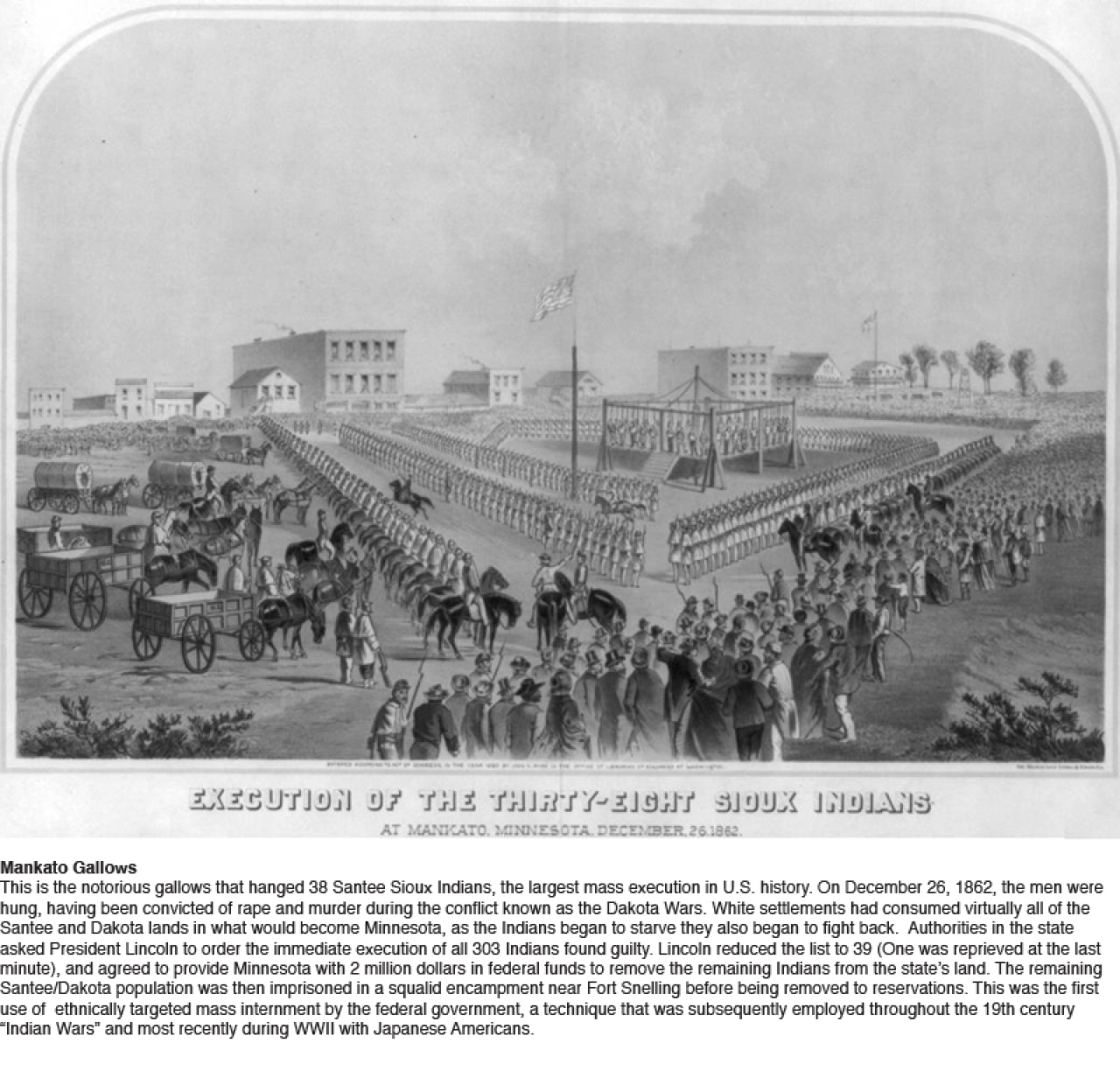 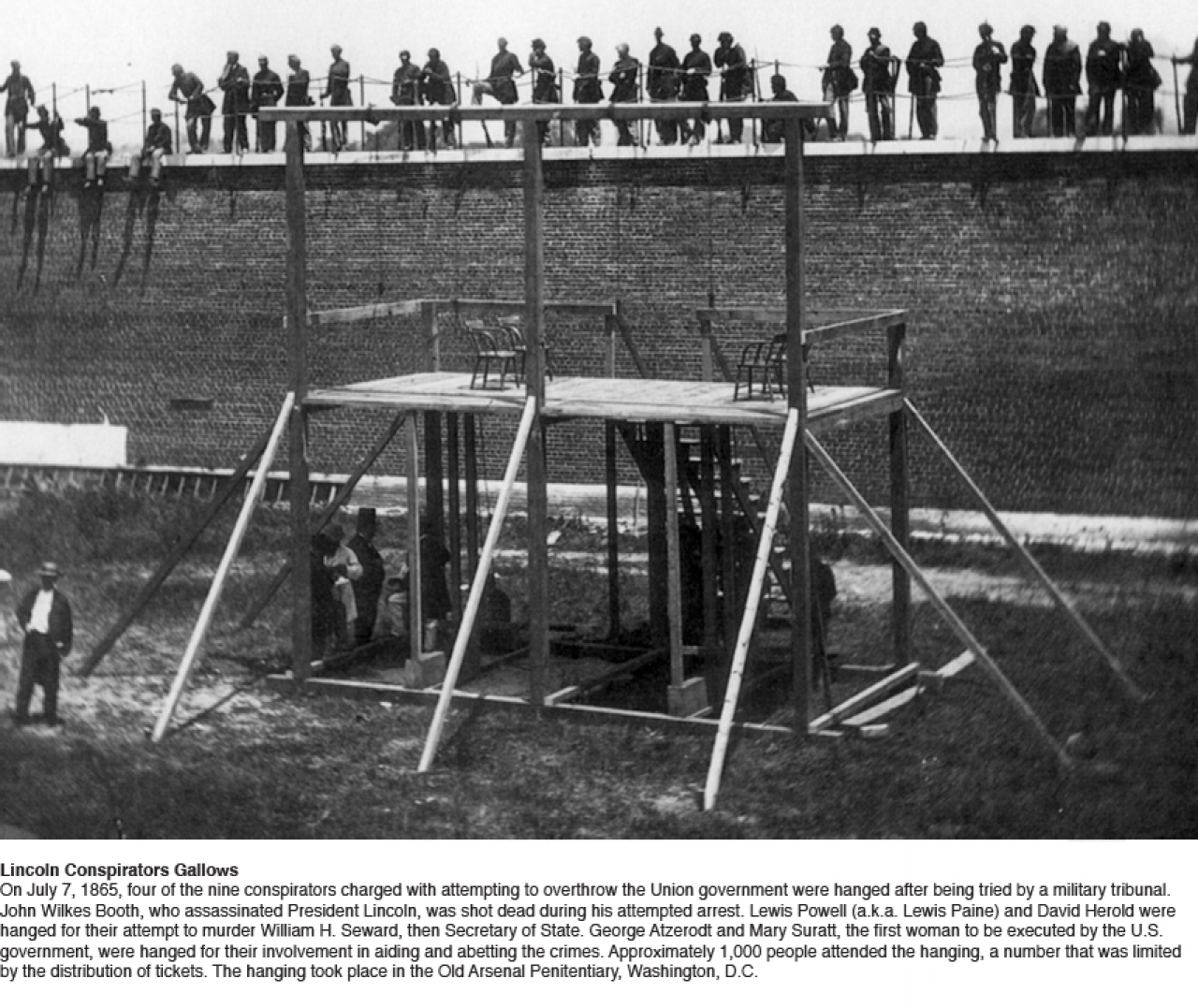 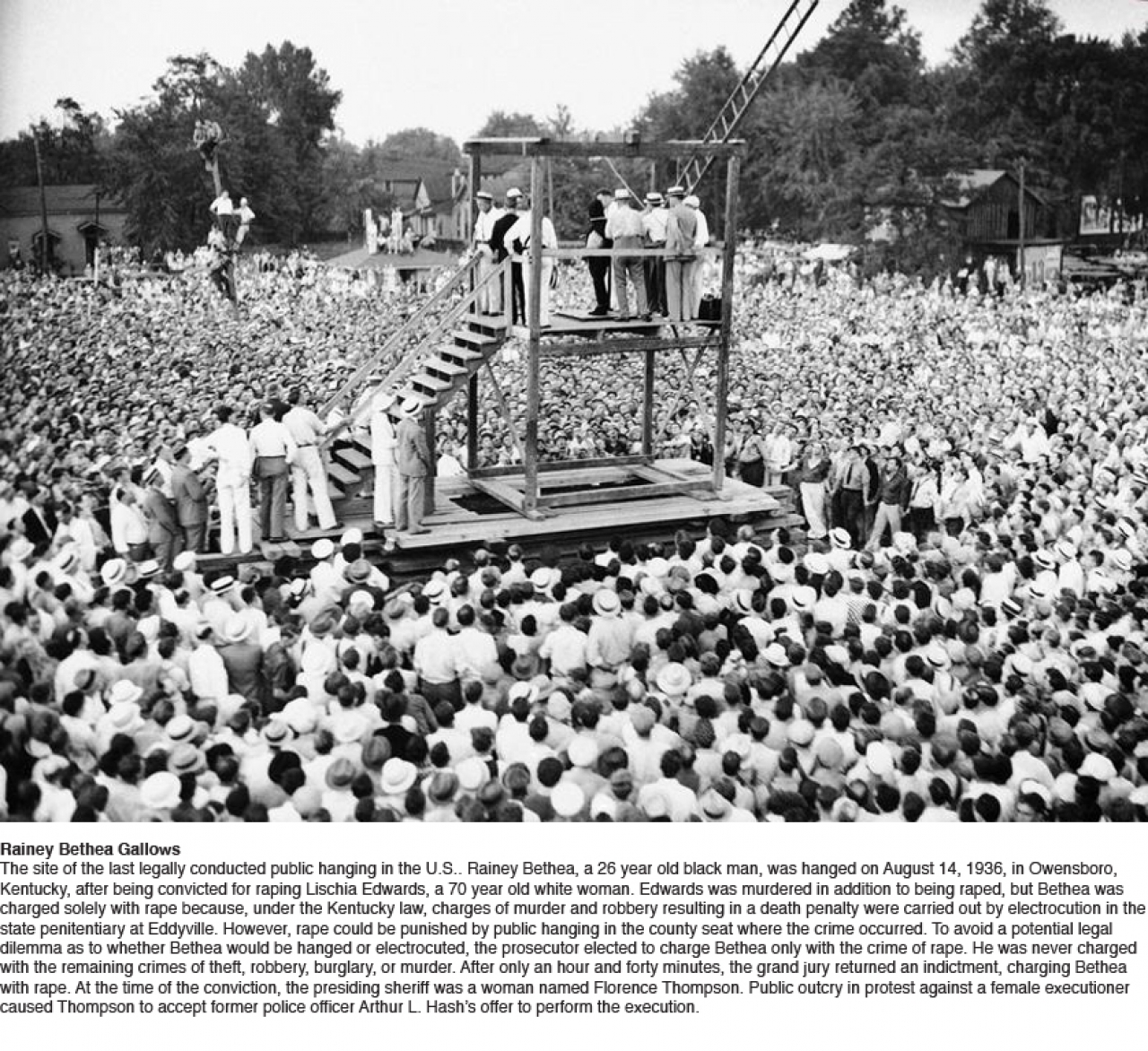 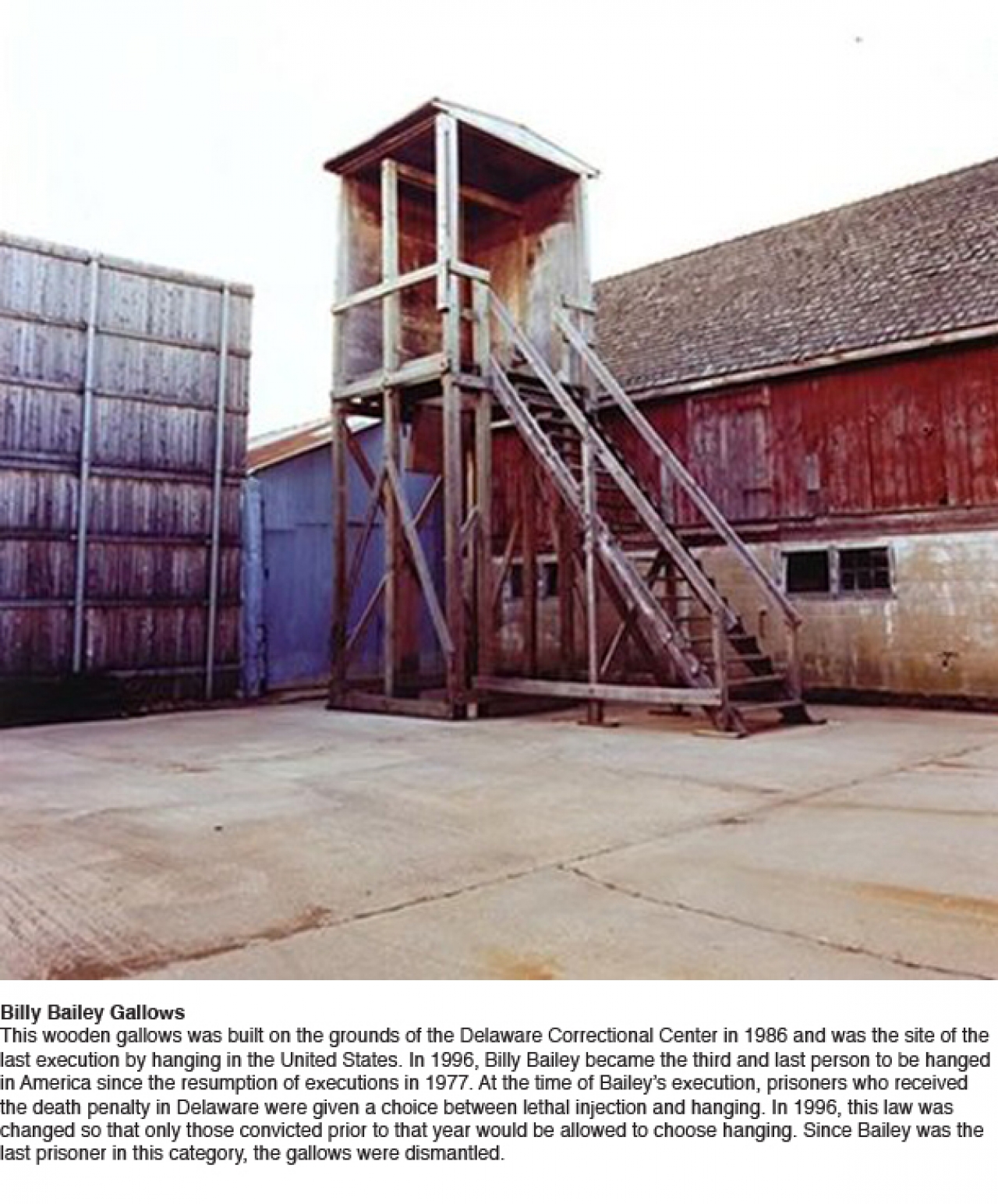 1. See “Stop the School to Prison Pipeline” in Rethinking Schools. Vol. 26, No. 2, Winter 2011-12. www.rethinkingschools.org/archive/26_02_edit262.shtml
2. Although Hussein’s death sentence and execution were not carried out on US soil it can be argued that it is a part of U.S. history and is an important moment worth considering within the context of this project.
3. In 1972 The U.S. Supreme Court ruled against the constitutionality of executions in Furman v. State of Georgia. In 1976 this decision was overturned in Gregg v. Georgia allowing states to re-institute the death penalty. The state of Utah made Gary Gilmore the first prisoner executed in the wake of the Gregg decision, thus beginning what is referred to as the contemporary era of capital punishment in the United States.
4. Gottschalk, Marie, “The Long Shadow of the Death Penalty: Mass Incarceration, Capital Punishment and Penal Policy in the United States” in Sarat, Austin and Jürgen Martschukat, Is the Death Penalty Dying: European and American Perspectives. New York, Cambridge University Press, 2011.
5. Kathryn A. Heard, “Unframing the Death Penaly: Transatlantic Discourse on the Possibility of Abolition and the Execution of Saddam Hussein” in Sarat, Austin and Jürgen Martschukat, Is the Death Penalty Dying: European and American Perspectives. New York, Cambridge University Press, 2011.
6. The recent case of the Jena 6 serves as powerful reminder of both the continuing symbolic power of the noose, and the myth that the U.S. has “overcome” racism. See “Justice in Jena!” Free the Jena 6 Website. 2006. http://www.freethejena6.org/
7. “Racial Disparities in Federal Death Penalty Prosecutions 1988-1994”, Death Penalty Information Center, March 1994. http://www.deathpenaltyinfo.org/racial-disparities-federal-death-penalty…
8. From “Death Penalty Information Center.” The Death Penalty: An International Perspective, 2007. From
9. The Innocence Project was instrumental in this situation. See “The Innocence Project.” The Innocence Project Homepage. 1992. The Benjamin N. Cardozo School of Law at Yeshiva University. 28 February 2008. http://www.innocenceproject.org/
10. Barack Obama, the Democratic Party nominee for President is in favor of capital punishment.
11. Racial fears are often invoked in this context- one of the most infamous examples was during the 1988 presidential campaign between George Bush Sr. and Mike Dukakis. The so-called “Willie Horton” advertising campaign in which mug shots of a very dark skinned convicted rapist were broadcast across the nation to devastating effect. William Horton was an African American imprisoned in Massachusetts while Dukakis was Governor. As was the case with all qualifying prisoners he was released on weekend furloughs as part of the State’s prison rehabilitation program. Horton never returned to prison from a furlough and later was convicted of rape and robbery in Maryland. Bush’s campaign produced an ad featuring Horton’s menacing mug shot designed to stoke racial fears. It was “every suburban mother’s nightmare” as Bush’s media consultant called it and was instrumental in his election victory.
12. Aizenman, N.C.. “New High In U.S. Prison Numbers.” Washingtonpost.com. 29 February 2008. http://www.washingtonpost.com/wp-dyn/content/article/2008/02/28/AR200802…
Pew Center on the States report, One in 100: Behind Bars in America 2008
http://www.pewcenteronthestates.org/report_detail.aspx?id=35904