Voina is a revolutionary group of Russian artists that engages in radical street protest actions. The group was founded in 2005 . The group doesn’t cooperate on principle with any of Russian curators, nor gallerists, state or private institutions. More than 20 criminal cases have been brought against the group. In 2010-2011 two activists of the Voina – Vorotnikov and Nikolayev – were detained in jail for 3.5 months under accusation of inciting hatred towards the police by means of the art-actions. They were released from custody, as artist Banksy bailed them out. At the present moment Voina Group are wanted by the Russian police. Voina activists have experienced dozens of arrests, searches, as sault sand batteries committed by Russian cops. Voina activist and political prisoner Taisiya Osipova was arrested at 2010 and got 8-year sentence.

The first of April was a day like any other. As I opened my laptop I found out about Voina and that they got arrested and thrown out of their place somewhere in Basel.
I’ve always been a fan of the Russian group so I decided to contact them and offer my help. I was very excited when I found out that they were easy going and wanted to talk to me over
Skype. I clearly remember that day because I was very nervous meeting my art heroes for the first time. 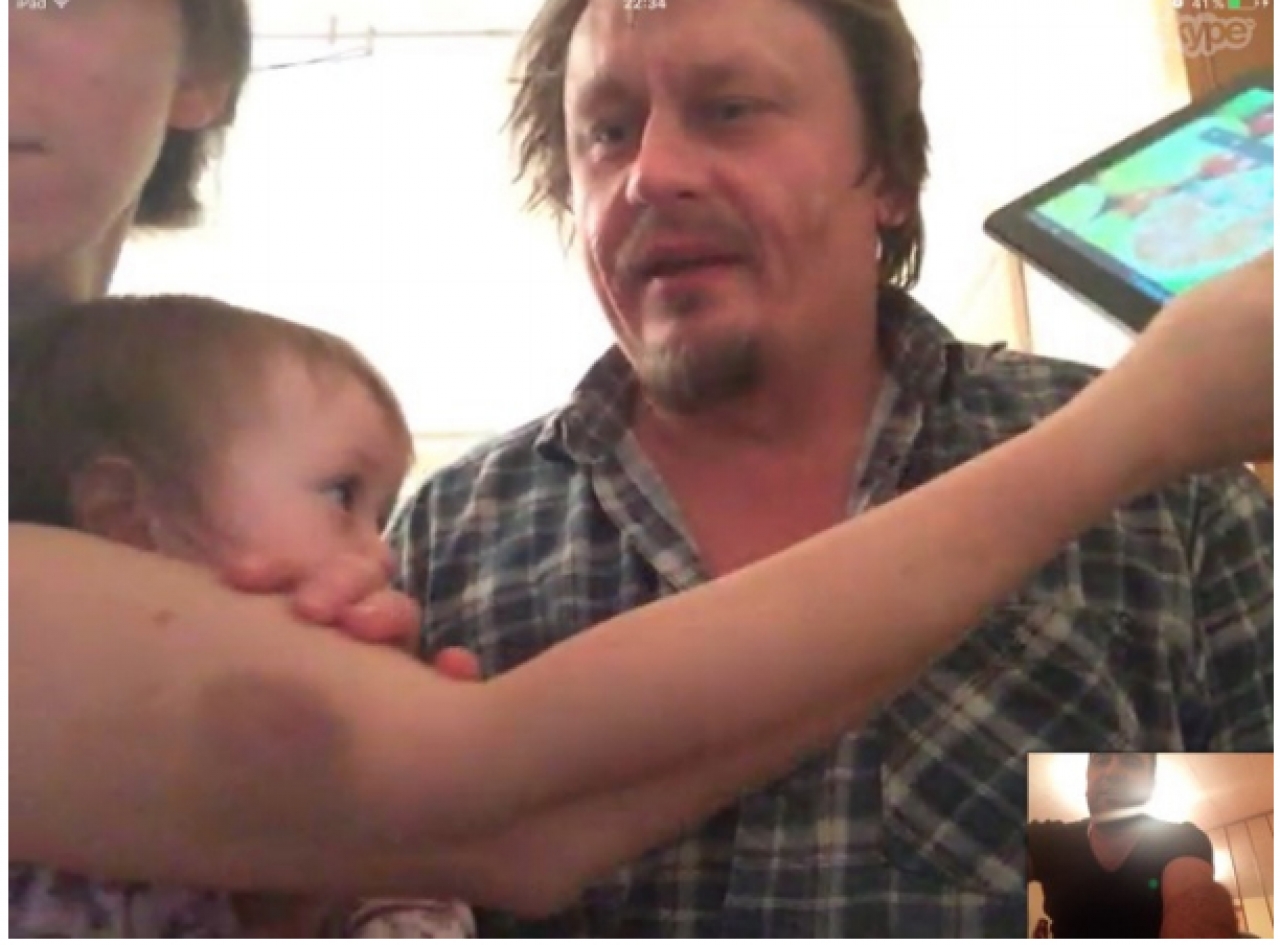 During our first conversation which lasted about one hour I got a lot of information about the family. They have been on the run for quite some time and that Oleg is searched by Interpol and Russian Authorities. At that time they stayed somewhere in Konstanz a small town near Bodensee in the south of Germany. The incident that drew my attention some months ago goes a little something like this: On 20 March members of Voina group Oleg Vorotnikov, his wife Natalya Sokol and their three children Kasper, Mama and Troitsa have been violently thrown out of their flat in Basel and put on the street. After a short fight Oleg got beat down and bound with duct tape. 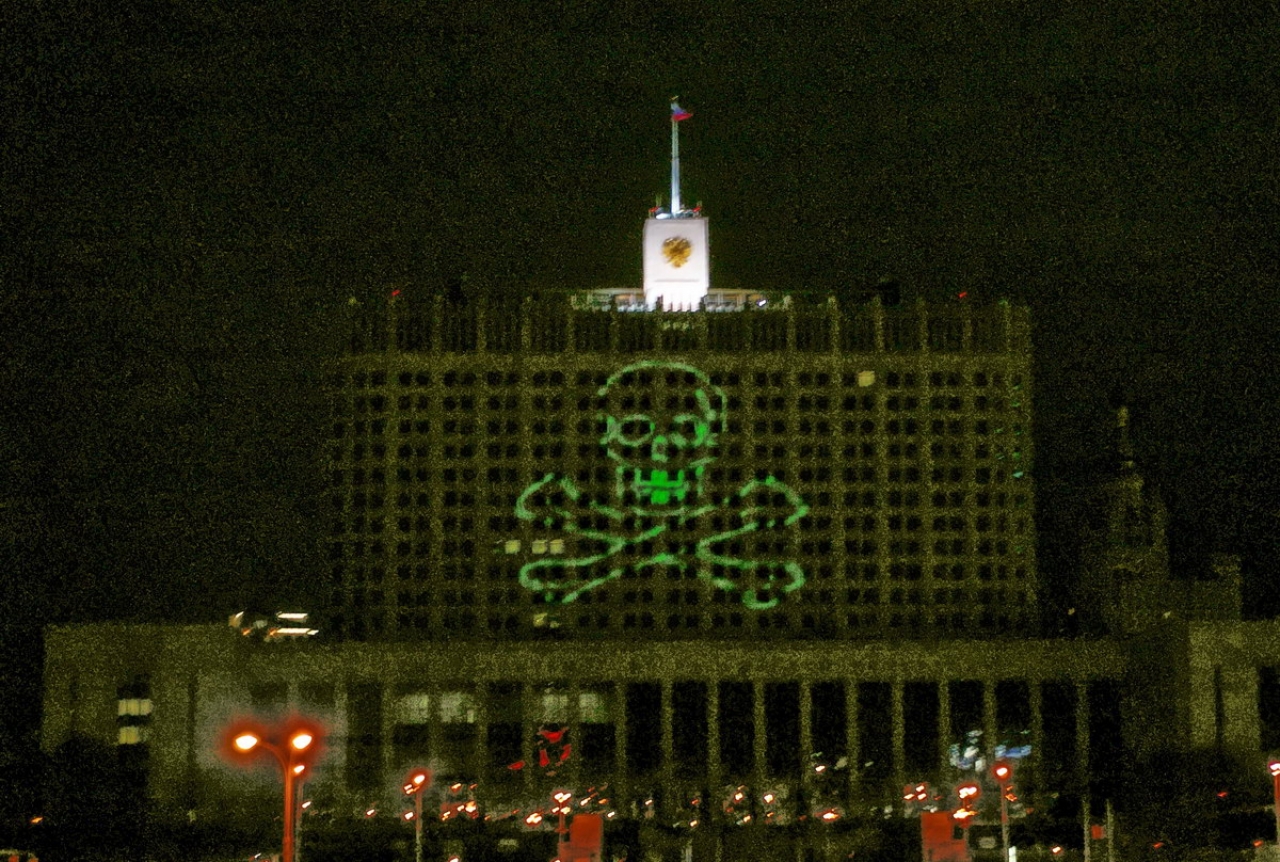 A Jolly Roger fired at Russia’s parliament on Revolution Day

The kids were thrown out naked off the bathtub. His wife Natalya suffered severe injuries on the upper arm, hematomas on all extremities, shoulder and head. The attackers were activists of the so called Kooperative Wasserstrasse Basel. They also took away from the family 2 laptops and 2 IPods . They were armed with sticks and shields and partly masked. The bunch was lead by Almut Rembges a Swiss human rights activist(!). In their house Voina had been quartered for several months. 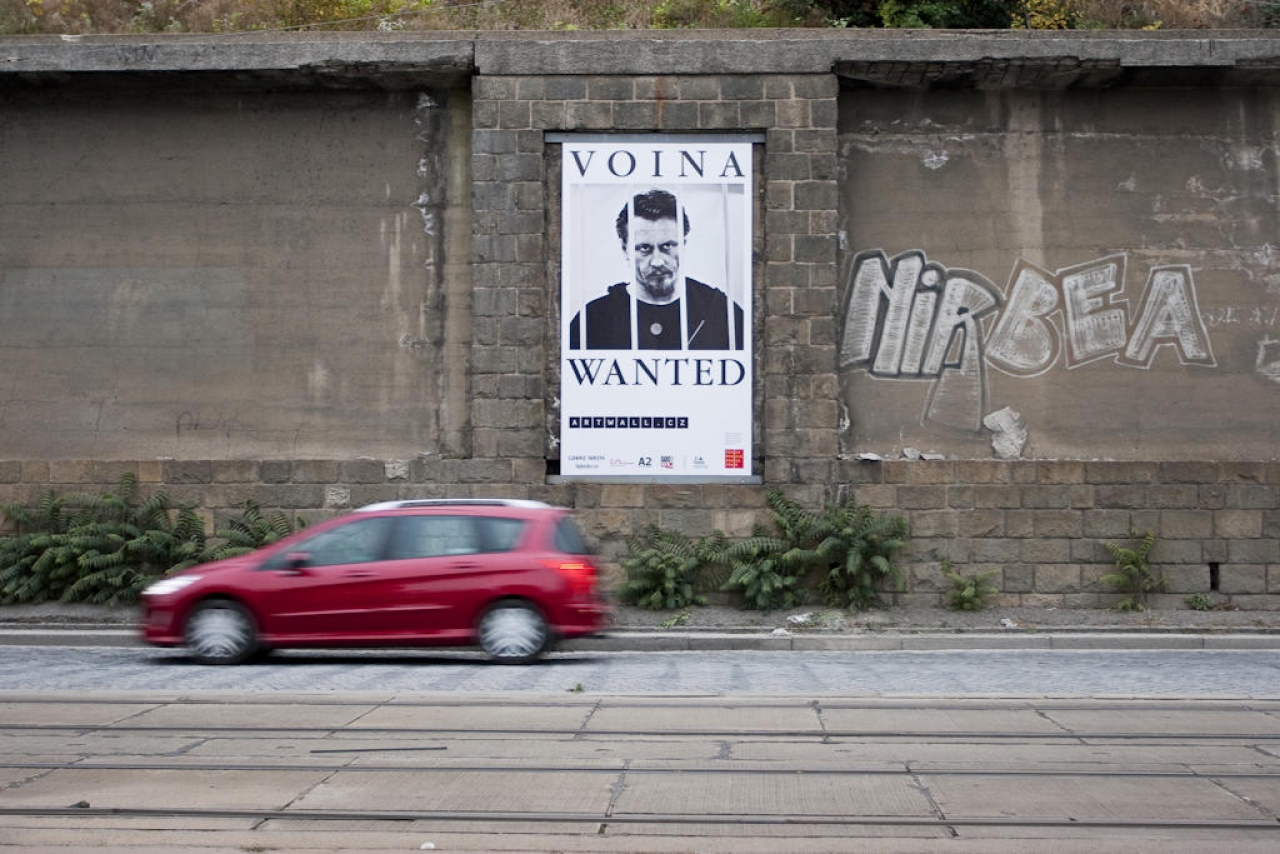 Later that day the group was arrested by the police because they couldn’t identify themselves sufficiently. They were threatened if they won’t go to asylum camp Aesch they will be send back to Russia where jail is awaiting them. One must know that the living situation in Aesch /Swiss is really terrible. It’s a shakedown where a lot of families are living there in tiny rooms without windows. Swiss police even threatened to send the kids alone back to Russia! There is a video of the Basel attack but police confiscated it and did not want to release it.

Since then the group was on the run and did stay illegal in Germany. The question always was what is to be done? I contacted as many friends, lawyers and activists as I could and asked if they would help the one way or the other. 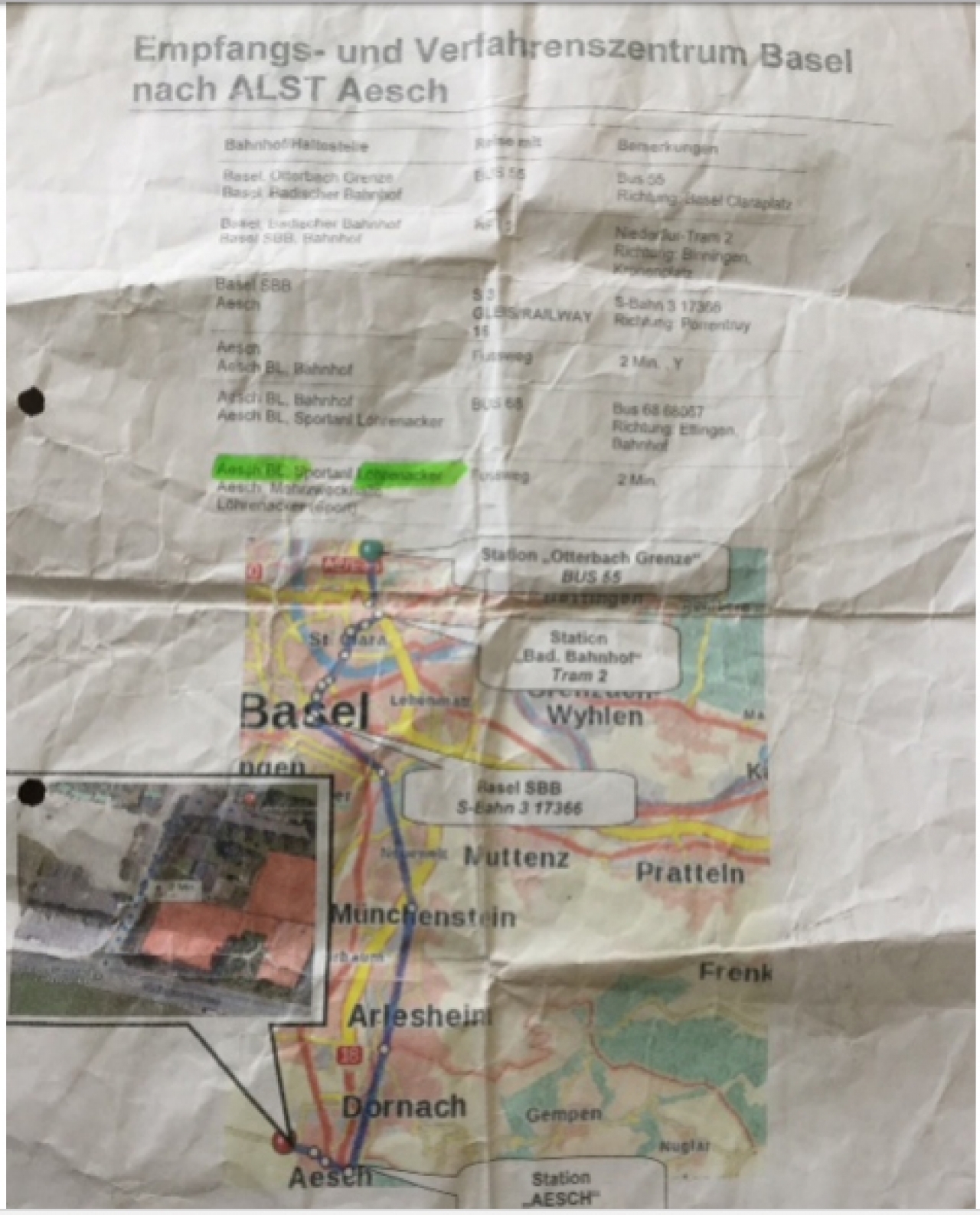 Between April and May I had many Skype calls with Voina trying to figure out what is best for them. The biggest problem was I found out after talking to asylum experts, the so called Dublin regulation: “The Dublin Regulation aims to “determine rapidly the Member State responsible [for an asylum claim]” and provides for the transfer of an asylum seeker to that Member State. Usually, the responsible Member State will be the state through which the asylum seeker first entered the EU.” (Wikipedia)

That means that they could only apply for asylum in Switzerland but not in Germany. There are only a few exceptions possible. I spoke to a dozen of experts but none of them could really
help. During our Skype meetings we discussed all sorts of tactics and how to proceed. We agreed that gaining official attention via the press would be a good idea. We wondered why the art scene is not helping at all.  So I wrote tons of mails to art institutions and famous artists like Ai Weiwei of whom I knew he was at that time in Berlin because he made friends with one of my Ex-Girlfriends. But nothing happened. I even wrote to Yoko Ono!

Let me tell you, it is not easy when you live in a small provincial town to reach out there…) A dear friend of mine in Saarbruecken who is journalist finally could help me, making contact with the Süddeutsche Zeitung. The national newspaper is known for good and moderate left journalism. But for them we found out later, it was more important to get a teasing story about Voina but not to help. The article they published is not very friendly written and you realize the authors didn’t know how to classify neither the group nor their art and what it stands for.

Since that time Voina is still on the run through Europe mainly in Czech Republic and in Germany. If you have accommodation or thinking to invite Voina to your art institute please feel free to
contact us! ugenee@gmail.com really@free-voina.org 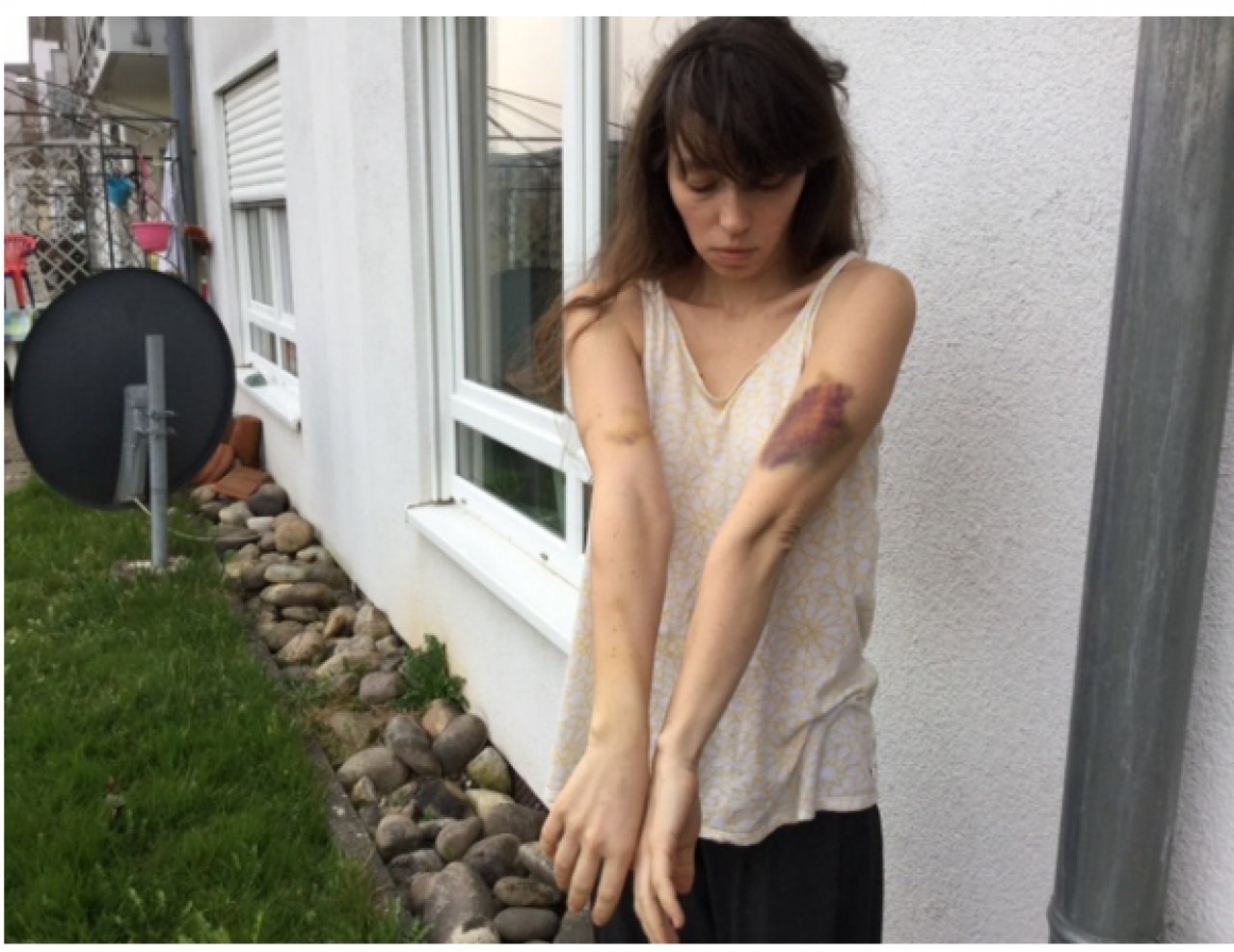