Around a decade ago, four students of the Gerrit Rietveld Academie found a shared interest in digital and online art. Their teachers didn’t really keep up with digital practices, so they decided to delve into it themselves. The group spent their weekends discussing online developments and giving each other feedback on their work. They called these meetups the hardcore-sessions.

Since graduating from the academy, the alumni have moved on to sustain their own independent art practices. They also maintained a collaborative approach since their student days and together have formed the artist collective HARD-CORE. Since becoming a collective, they’ve taught at the Rietveld, now teaching a course that they felt they lacked as students. HARD-CORE’s teachings promote art-making for different off and online platforms as well as embracing new technologies.

I’m curious what we can take from their approach to art and education and asked the collective a number of questions via email. I want to find out how HARD-CORE, as ‘experienced-remote-working-digital-natives’, deal with the rather unique situation the pandemic has created for art education.HARD

Before we talk about your role as teachers, could you describe the general activities HARD-CORE facilitates?

The hardcore-sessions we organized as students, made us see an overlap between our individual practices. So, we wanted to exhibit our works together and attempt group exhibitions. One of the most important criteria we felt necessary for a group show was creating equal space for all the works to be displayed. This resulted in the development of a robotic tool, which would take the curatorial decisions for us. The robot, which we named ASAHI, made decisions on objective criteria such as positions of works, colours of walls, opening hours, title of exhibition and light conditions. We basically developed a curatorial robot.

How does the curatorial robot ASAHI ensure ‘equal space for all the works to be displayed’? Is a randomized approach synonymous with an equal approach?

By equal we are referring to the equal potential every participant has within a group exhibition. Apart from accepting the conventions of displaying art in exhibition spaces, ASAHI provides a non-biased way of curating artworks within a shared space.
Our research on the curatorial robot went alongside very rapid developments within the field of artificial intelligence and embedded structural racism in programming. As a random process is executed through algorithms there is always the identity of the ‘programmer’ and its agenda inscribed into its workings. We tried to work against this presence of the programmer by detaching the robot’s decision-making from conventional exhibiting choices and instead have it focus on environmental factors, like humidity or dust particles.
With the development of ASAHI we focused on the structure of exhibition making, and how a non-human identity could curate an exhibition according to different parameters than a human being would. The robot in turn forced us to take a step back as individuals and allow the collective to develop an identity of its own. We also explored this notion of collective identity by having a spokesperson who would become the public face for HARD-CORE. We created a fictional CEO for the collective, called Skyler Lindenberg, who has been performed by two different actors. Both ASAHI and Skyler Lindenberg bring people together to rethink, and playfully disrupt the foundation of togetherness.

HARD-CORE always presents itself as a single voice, for example through ‘CEO Skyler Lindenberg’. In reality it consists of four different artists. In what way do the individual artistic practices from the members of HARD-CORE overlap?

We have this idea that with every communal project we come up with, we have to make space for the individuality within the group. The video Universal Blob was really a testimony to that approach. This lecture video deals with the difficulty of being together as a collective, but still wanting an individual voice within it. Ultimately, HARD-CORE had a massive influence on our individual practices. We all practice art in a very structural way, meaning: we are interested in creating encompassing systems that determine the context of an artwork and influence its presentation. 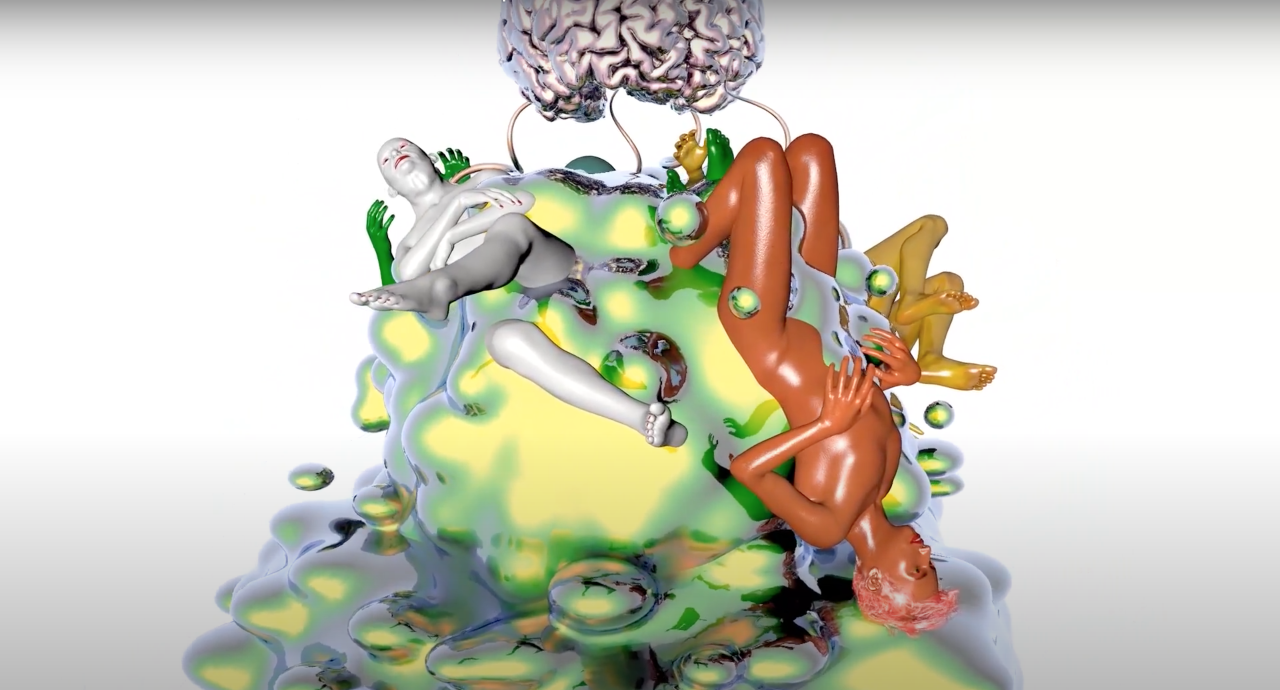 One of the more obvious ‘encompassing systems’ that imposes structure, is the act of curating which you hijacked by creating ASAHI. How would you describe the role of the curator in today’s art world, and how would curation ideally take place?

The most dominant model of a curator today is the ‘powerhouse big shot curator’; a gatekeeper to selecting ‘good’ art, contextualized and meticulously placed into a gallery space. These characteristics can be seen in Hans Ulrich Obrist’s way of presenting and creating his curatorial persona. An individual who travels the world, meeting and connecting interesting artists, writers, theoreticians. In an excessive way of consumption and ‘bite-sized’ content.
This type of curation cannot continue forever and it becomes increasingly clear. The current COVID-19 crisis slashes away the two things that sustain this type of practice; the ability to travel and the ability to network.
We also see new curatorial and collective practices emerge, which operate in fundamentally different ways than the ‘power curator’. In these practices, the division between artist and curator is becoming increasingly opaque, leading to hybrid formulas. This affects networks of artists and the platforms where they exhibit. The platform now can exist both in physical and digital formats, without a particular gravitation towards one or another. Some good examples of these practices are​ DIS magazine​, New Scenario​, ​YGRG​, ​OMSK Social club​ and ​Hellfun​.

Currently student exhibitions are being cancelled on a global scale because of Covid-19. This also applies for the exhibition that was planned for Hard Core’s students who were supposed to show their work at the yearly ‘Rietveld Uncut’. There is, however, an important distinction to be made here since HARD-CORE has always maintained a “strictly digital” approach. From the very start HARD-CORE’s members worked remotely from each other and their students. Because of this, HARD-CORE and their students seem more likely to be prepared for the unexpected ‘lockdown-exhibition’ than others.

In what way do the students challenge HARD-CORE the most?

Our students are unpredictable and very inventive. They have their own interpretation of what we are doing and what they can get out of it. This is great, because sometimes that leads them to totally take over.
We once organized a workshop for Uncut and at some point, a student went: “okay, you need to leave, because we are the ones in charge now”. It is always a thin line between making sure students have a safety net and allowing them the freedom to take control of a project. Because we always approach projects as a collective, we are also keen on acknowledging the tension that can arise in a group and try to help students to use this tension in a productive manner. You can see the negotiations between individual practices in each of the projects we have been working on with them this year. This gives a rich and vibrant overtone to their works as collective entities.

Students who are fresh out of high school and apply to the Rietveld now are only three or four years older than YouTube. Do you feel that every new generation of students is more open to working in digital formats and maybe also more capable to do so than their predecessors?

It can be remarkable to see that students are not necessarily thinking about the online and digital culture they grow up with. They are often busy trying to replicate and digest the conventions of art history. Maybe digital culture is too close and mundane for them to even notice. In some way, it’s a good departure from back when the internet was heavily romanticized, for instance with early ‘net art’. A lot of the course Documentation & Online Presence, that we teach, is about connecting these two worlds: creating bridges between a more traditional view of art and digital practices.

What did this year’s students accomplish?

Our students have been working in groups towards a BingeMaraþon. A seminar ​that would have taken place at the Rietveld Uncut in the Stedelijk Museum. We divided them into different ‘blobs’ that went on to develop various projects on how to communicate and facilitate art online.​ If your work cannot be physically present, what form can it take?​ ​How do you communicate and work together when you cannot be together physically?​
When it became clear Uncut wouldn’t happen physically, we felt we should use that opportunity to have them think how their project could exist only online. The next important aspect for us was to find an appropriate place for this. Context is everything when you launch a work online.

With most people working from home, a lot of people struggle with feeling ‘detached’ from their work and social surroundings. In your educational practice ‘not physically being together’ is part of its foundation – even before the pandemic. How do you avoid ‘detachment’ occurring amongst your students and yourselves?

The module that we developed for the Rietveld Academie is called Documentation & Online Presence ​and, as the name suggests, it revolves around possibilities of communicating an artistic practice online – through documentation. The technical restrictions of our course, with us being in separate countries and teaching over skype, provided a communal inaccessibility to the “original” works of the students. What has become clear to us, is that when you teach online on a regular basis, you need to tailor moments of physical meetings. Digital culture was never meant as an ‘either or’ situation, it is a complementary tool to our life. To us finding the ideal balance of online and physical contacts was really the key to avoid that sensation of detachment.

The first year Fine Arts at the Rietveld Academie gathered in four seperate groups during the classes HARD-CORE taught. Each group made a trailer for their work, click the links to view them.
MANTIs: trailer
Zolder Zilverschoon: trailer
Natural Wealth: trailer
HANNAH: trailer