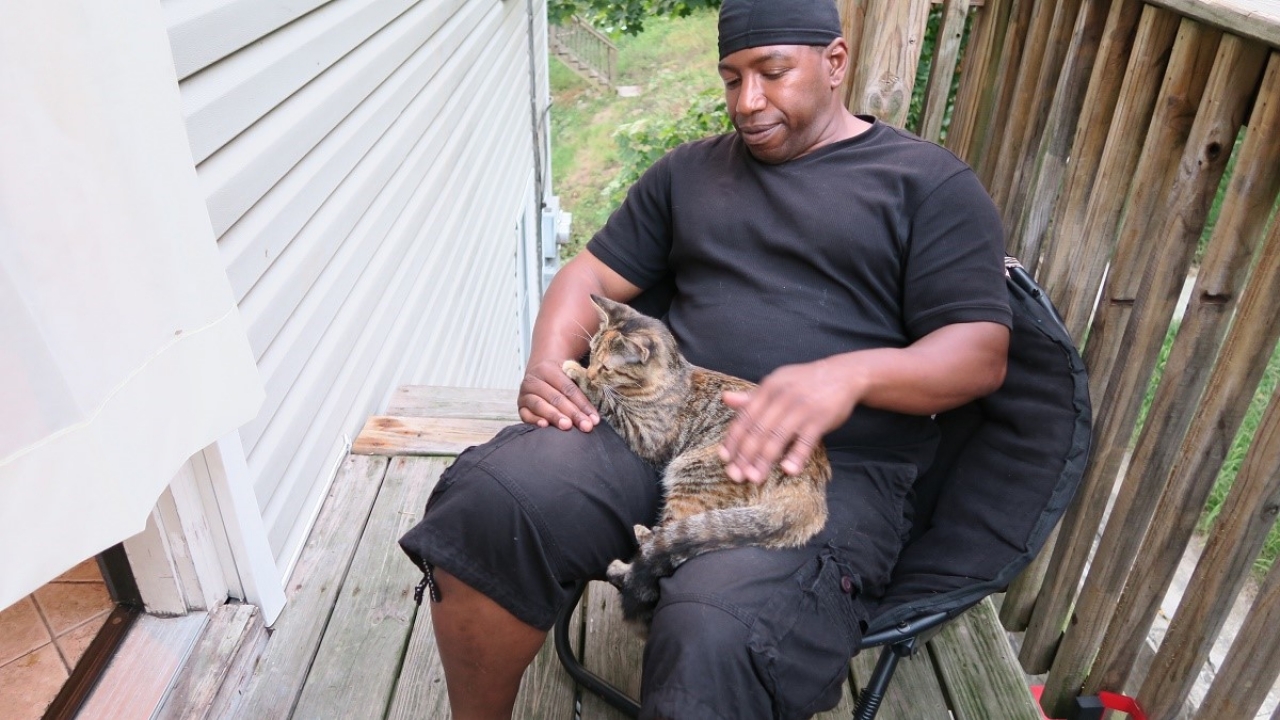 We’re going to start painting at Arthur’s place. He doesn’t live in Bohlmann Towers
but shares a floor of a white wooden house on a hill, close by the HVCCA. Arthur tells us that this is his first home after a year being homeless. He spent that year living in the Jan Peek House, Peekskill’s local homeless shelter. That’s also where he met his housemate Carlos, with whom he shares the apartment.
We soon feel at home at Arthur’s place. The place is spick-and-span and has a good atmosphere. And Arthur is a wonderful host. Princess the stray cat thinks the same. Arthur has taken her in and she relaxedly comes to sit with us. Arthur has bought a whole cat set-up for her: toys, a little house, bowls for food. He provides us—and Princess, too—with music, snacks and an evening meal. We’re served fish with rice and carrot cake, fruit and tea. 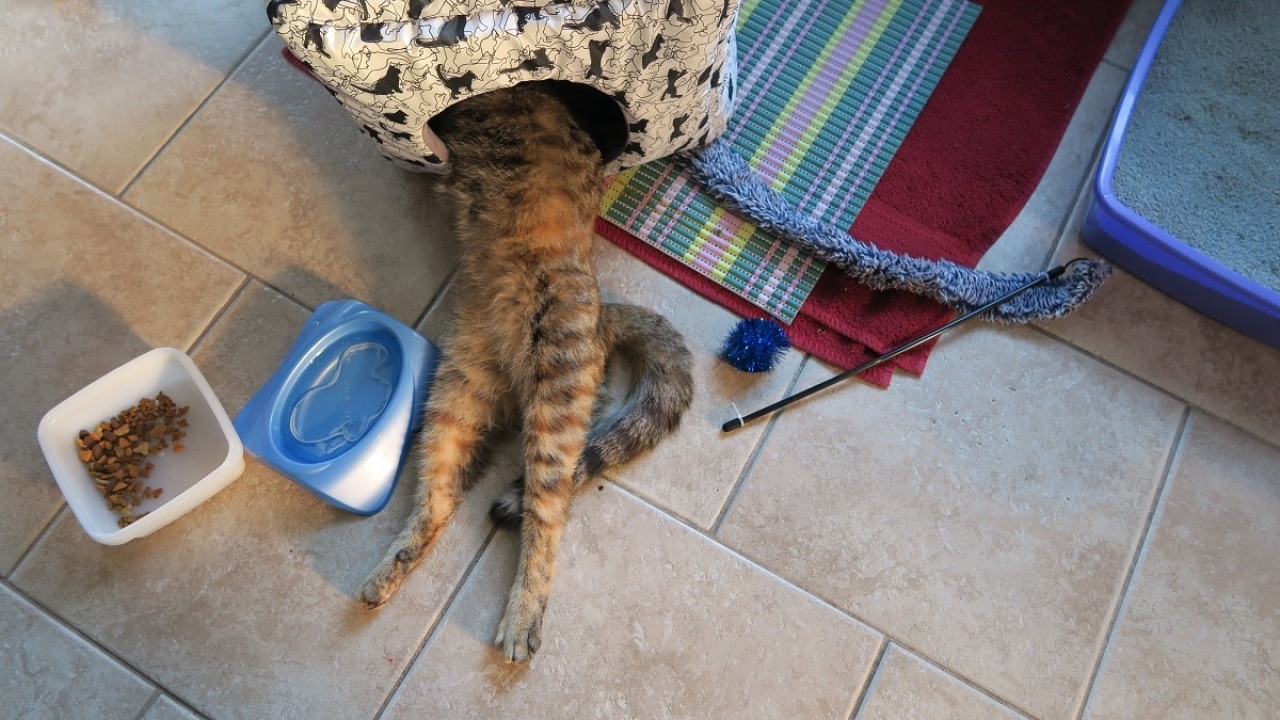 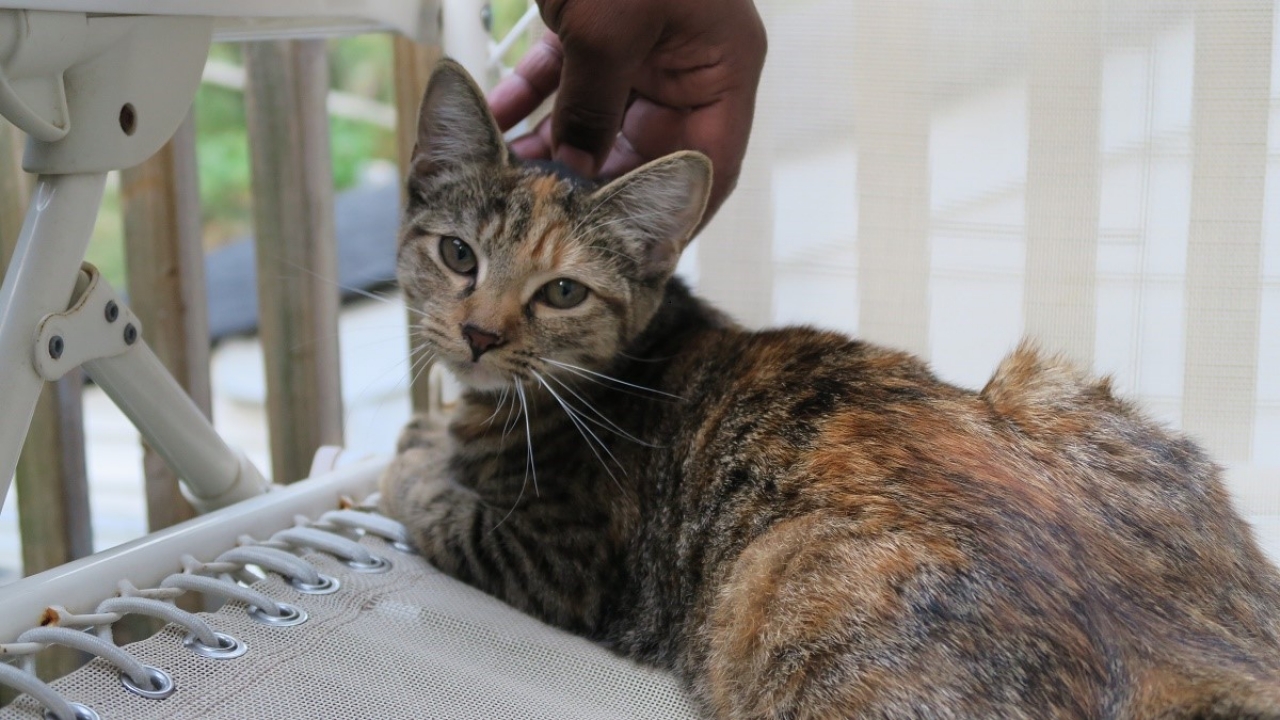 We’ve set out the dice, colour circles, paint and brushes on the bed. We spent more than three concentrated hours for the whole process of throwing dice and choosing colours blindly and noting down the results.
I always think that the atmosphere at such a moment influences the fall of the dice and thus affects the resulting painting. If we’re cheerful, positive and energetic, then the painting will ‘absorb’ that. Just like the music we play, actually all the vibes that are present at that moment. Perhaps it’s superstition or wishful thinking, but I nevertheless take it seriously, although I’m not quick to tell anyone. But I feel sufficiently comfortable with Arthur to tell him this. Fortunately he doesn’t react as if it’s strange. 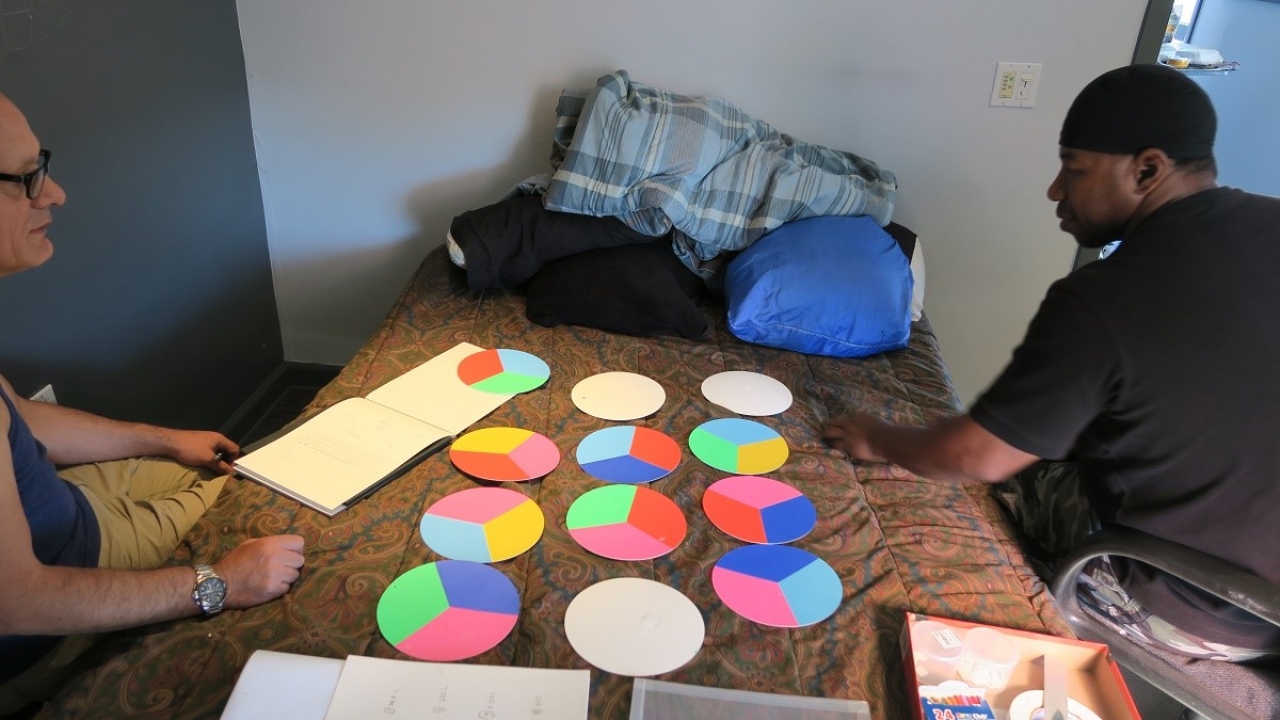 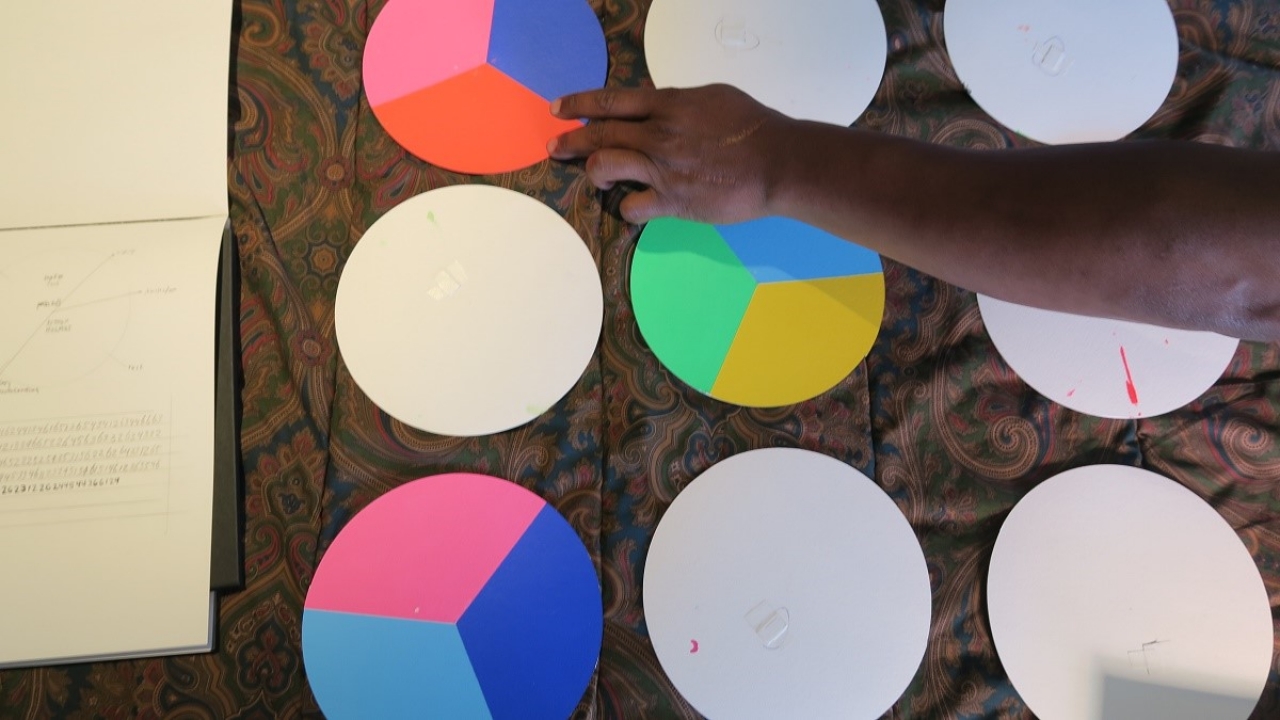 Arthur plays soul and funk for us. We have the same taste in music and the three of us sing along. For his painting he has chosen the wall above his bed, which is painted in a stylish grey, and the painting will contrast well against it. We briefly have misgiving about whether that will look attractive: Wouldn’t it be better on the other white wall? No, nonsense, we correct ourselves. We’re not in a gallery or museum as we’re used to. If the paintings are produced in high spirits, then they will fit anywhere, even with a tartan bedspread. And we also think it’s an honour that Arthur wants the work of art above his bed. 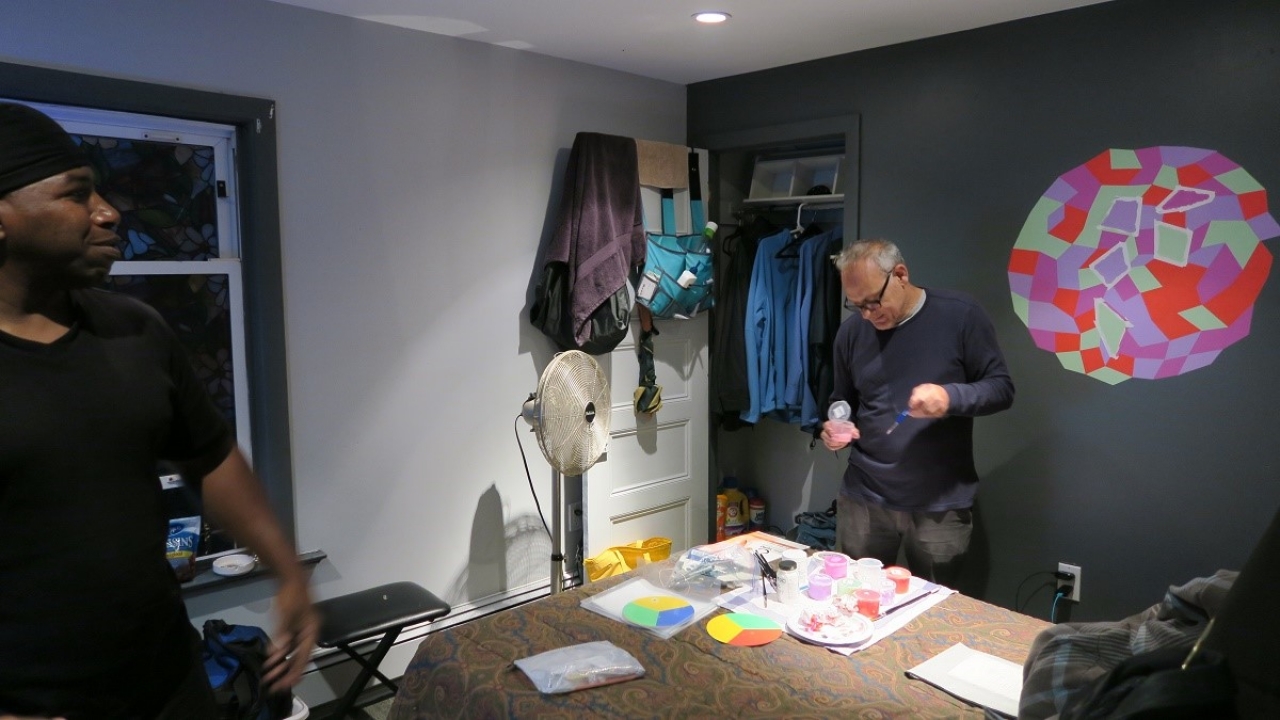 We’re at Arthur’s place to apply the last layer of paint. Arthur has borrowed new CDs from the library and provides fresh music for us all day long: Marvin Gaye, Otis Redding, James Brown, and specially for me Michael Jackson, too. We no longer need to throw dice or take notes, just paint in the colours precisely and allow them to dry in the meantime. Arthur makes hotdogs and tea for us. While painting we end up learning a lot about Peekskill.
Things are OK here now, but approximately 10 years ago it was rough here, really rough. The area around Bohlmann Towers was Peekskill’s most dangerous neighbourhood, a no-go area where dealers and gangs ruled the roost and you certainly couldn’t risk being out on the streets after 10 o’clock at night. On the field of grass opposite Bohlmann Towers, where we’re going to build our stage, there were houses and a deli. A couple of years ago everything was demolished, because things were always getting out of hand, and even the police didn’t dare to show themselves there. Demolition was the only option. And someone was shot dead at exactly the spot where we want to place our structure.
Arthur’s life was also a lot less relaxed back then, so he’s glad he’s leading a totally different life now. Next-door neighbours Carlos and Brad come by to watch the painting process. Carlos loves art and shows me his room where he has carefully filled the walls with framed drawings and paintings that he bought at the local thrift store.
I once read somewhere that houses with a positive, harmonious atmosphere attract lots of animals, and that an above-average number of animals live around houses where people meditate often. At this house it’s a to-and-fro of animals. In the morning deer come to graze in the garden, in the afternoon I see groundhogs, squirrels and butterflies, and besides Princess there is also the stray cat Flaco, who drops in for a bite to eat.
Brad treats everyone to pizza. The painting is going to look good. And we learn a new word from Arthur: copasetic. Everything sure is copasetic here. 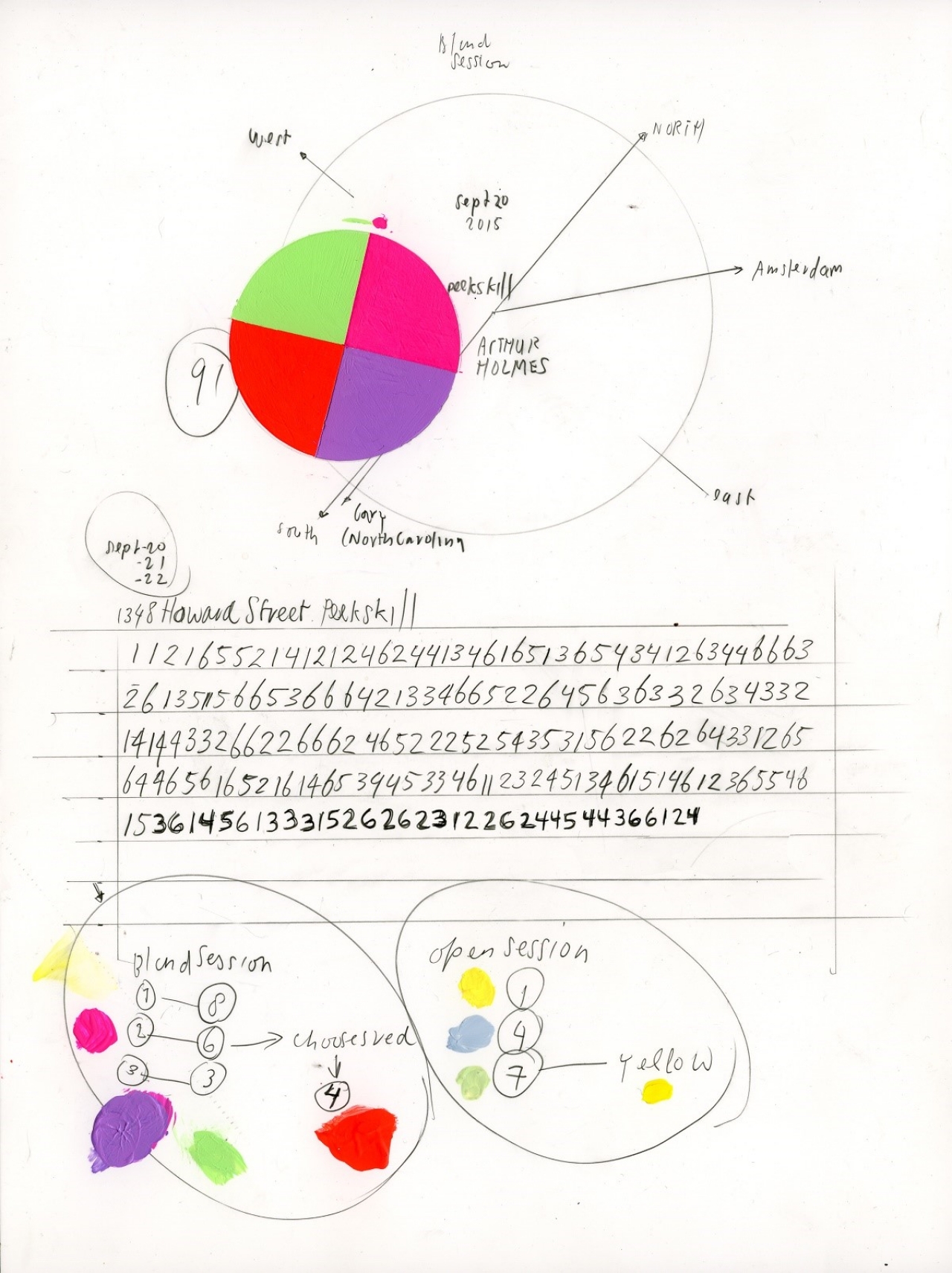