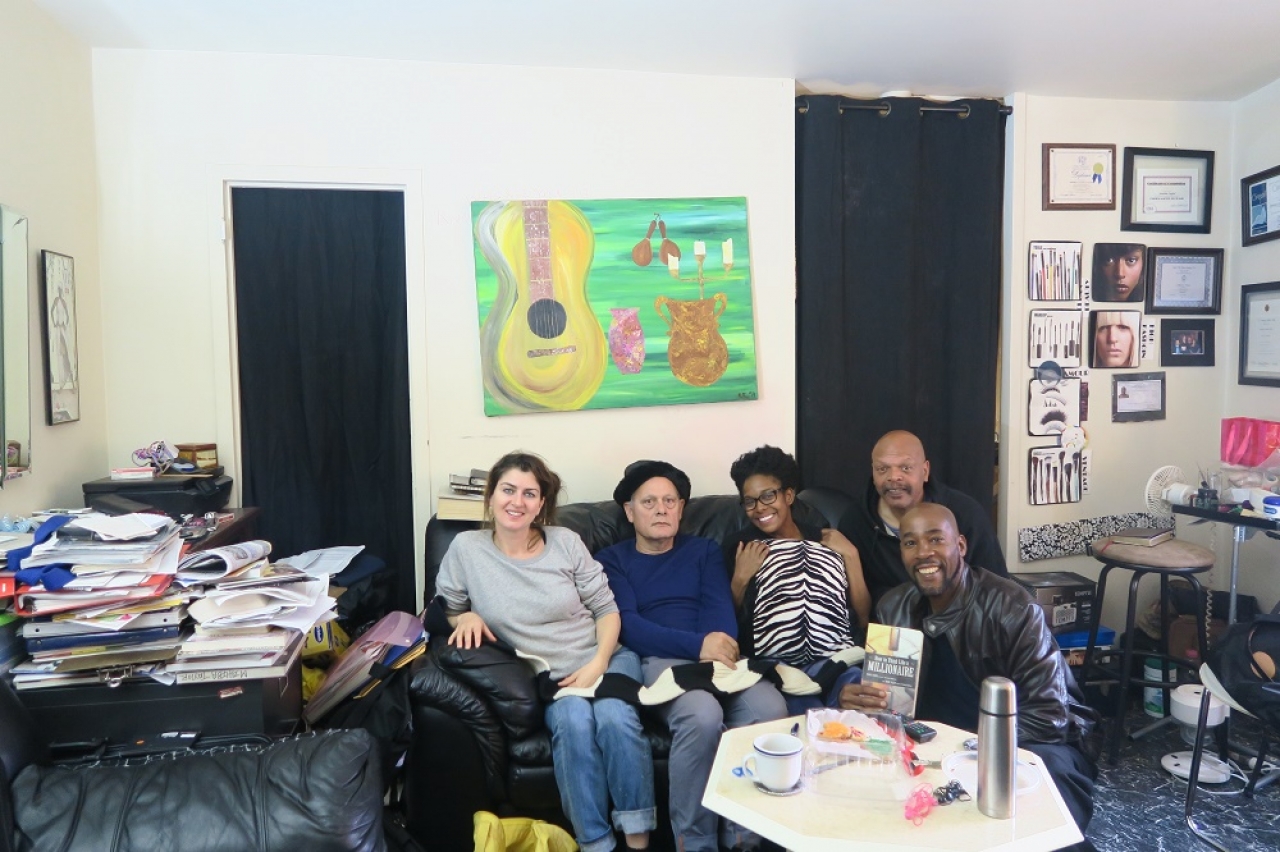 Today we’re painting in Bohlmann Towers for the first time, at Mishiba’s apartment. Her friends Emerson and Maureen, who are both going to get a wall painting, are also present. And their pastor is there, because he temporarily has no place of his own and is sleeping on the couch. Today they’re having their weekly Bible study session at Mishiba’s place. There’s just enough room for us and the mood is convivial. It’s Wednesday, so we’re eating pies and pastries from the Kiley Center.

Mishiba likes to paint herself and shows us her work. She hasn’t produced anything for a while, but is keen to take it up again. She’s a beautician by trade, so she’s good with brushes and colours. She works from home. In the corner of the living room stands a treatment chair and there’s a pricelist hanging on the wall, in the midst of a mass of photos, diplomas and paintings. She knows precisely what she wants with her painting. It must be right next to the front door, next to her most important family photos, like a ‘welcoming blessing’ for all her visitors. 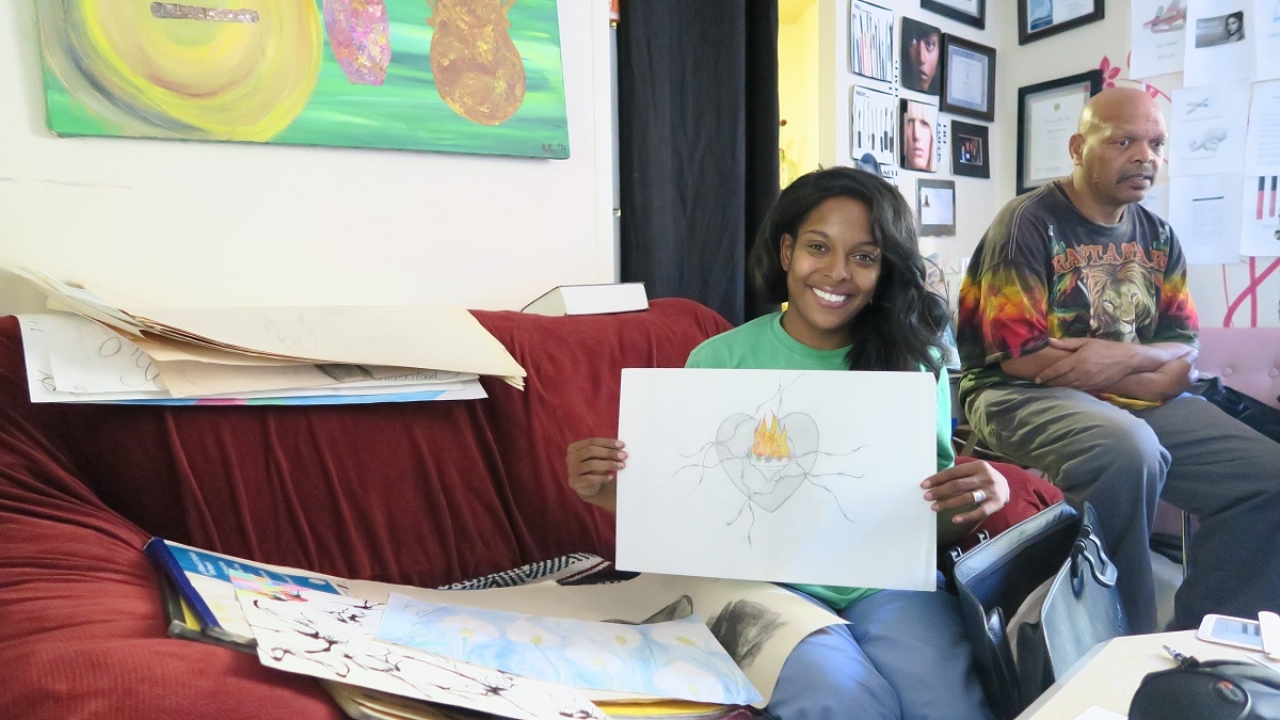 Mishiba knows a lot about the African American history of Peekskill. She explains about Paul Robeson and about the Underground Railroad. During re-enactments by the Underground Railroad Tours she has acted the role of Harriet Tubman a few times. In her bookcase she searches for Paul Robeson’s Here I Stand for us. We have to read it, to understand the history. A friend who pops by to visit takes another book from the bookcase: How To Become A Millionaire. Another useful book for people in Bohlmann Towers, he jokes. He doesn’t have high expectations, because by the look of it it’s a written-off library copy. 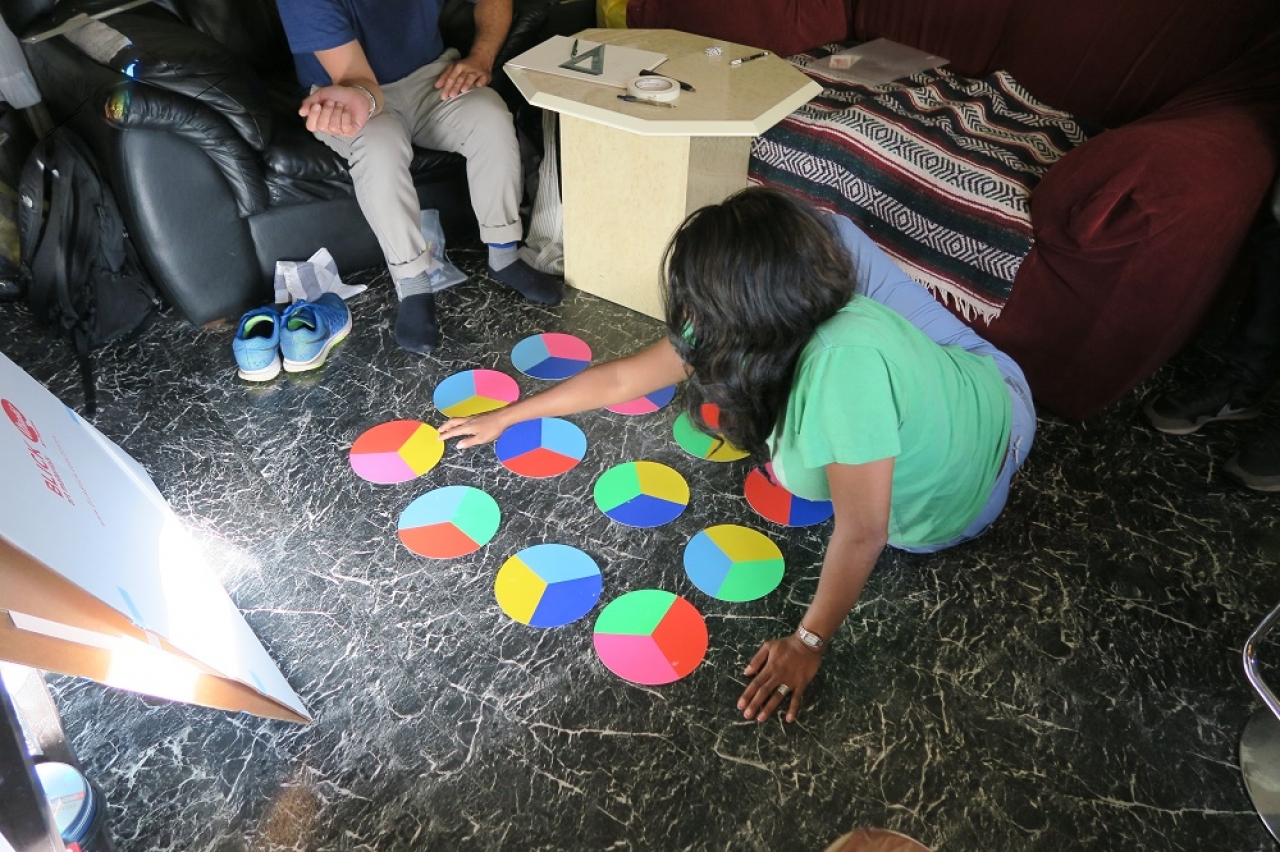 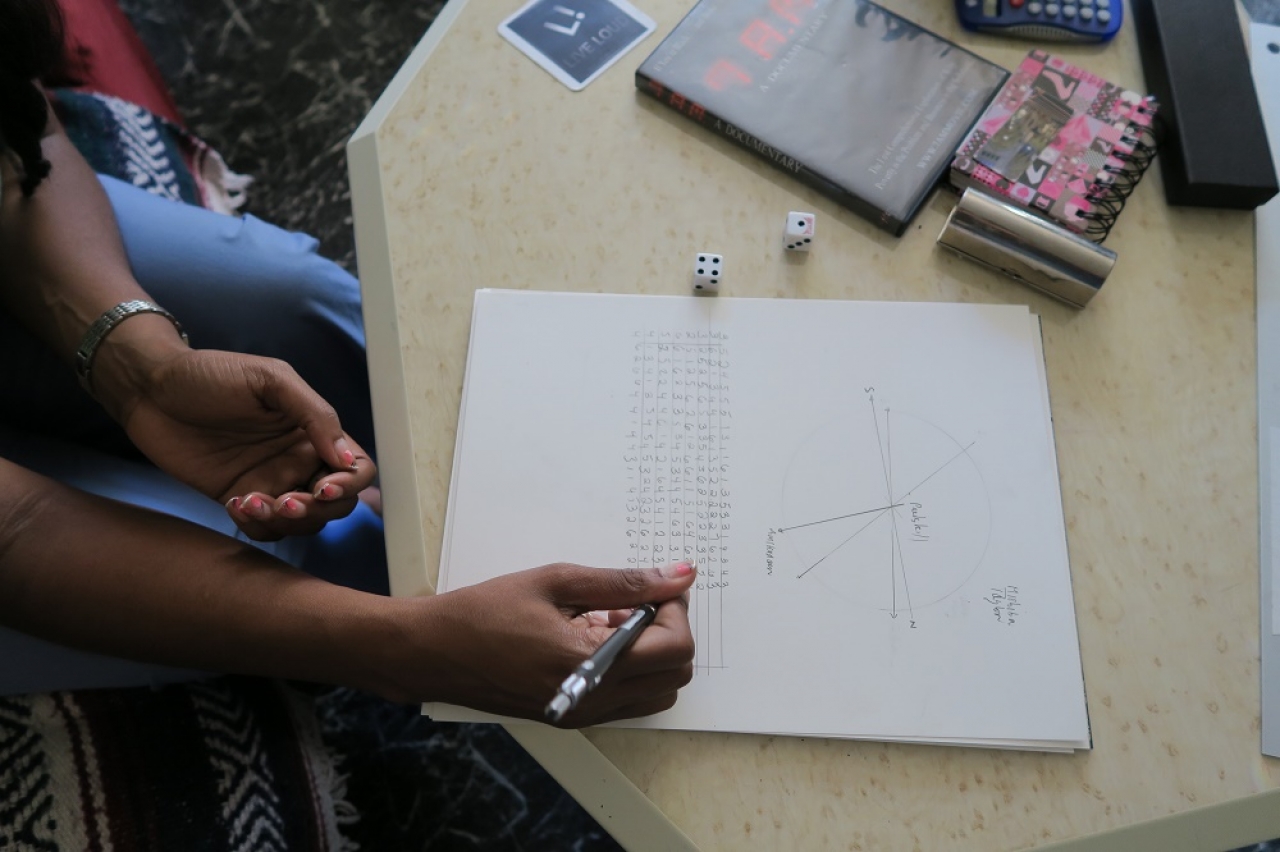 Once everyone has left, Mishiba becomes focused and throws the dice for a couple of hours without a break. It’s quiet in the apartment now. A gentle breeze wafts through the windows and it smells of incense and perfume. Mishiba chooses calmly and self-confidently from the face-down colour circles. She doesn’t hesitate; she knows precisely which one she wants. She doesn’t believe in chance and knows that everything has a reason, including us working together on these paintings. She is Jewish as well as Christian and in general she is very spiritual. Between the door and the painting stands a staff, for a Jewish ritual we’re not familiar with. 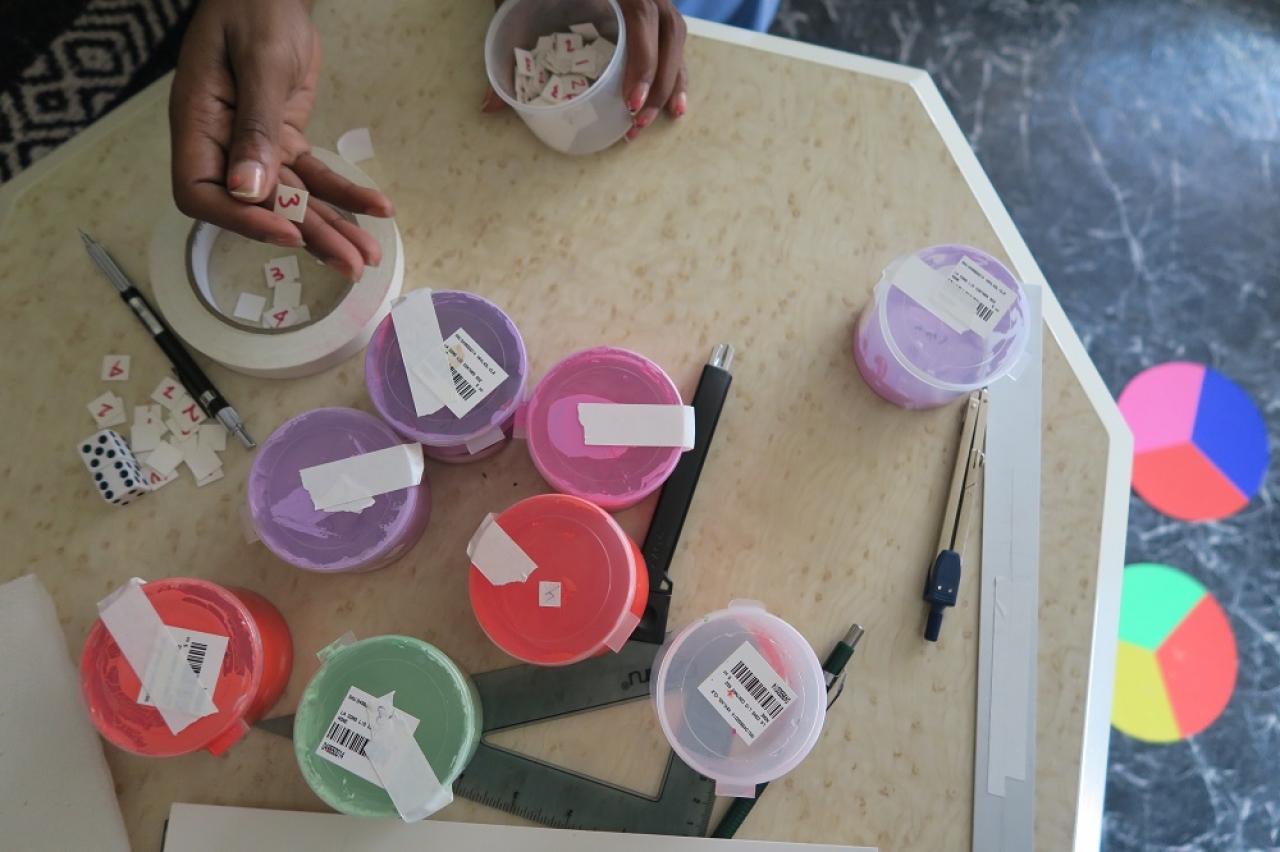 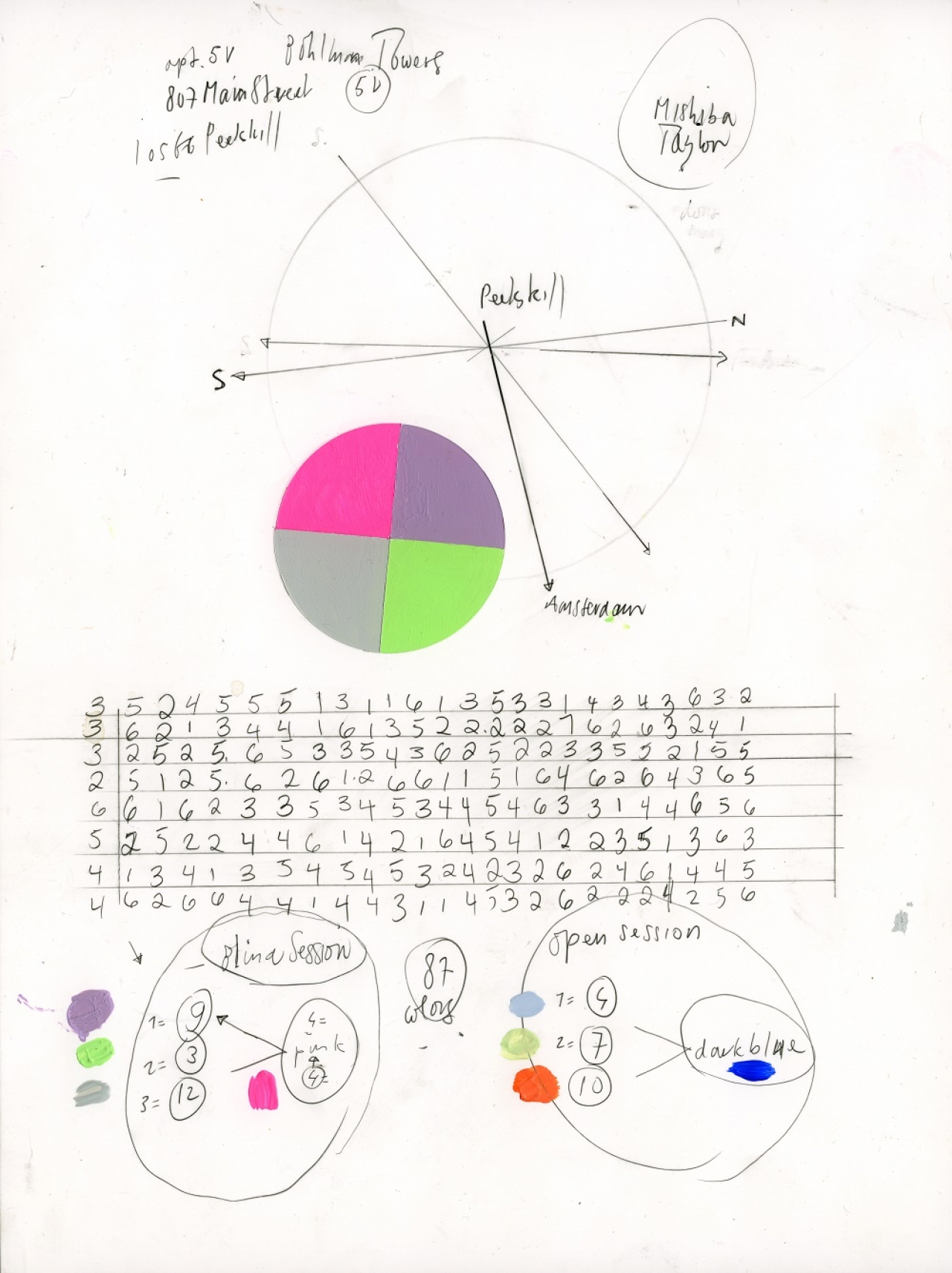 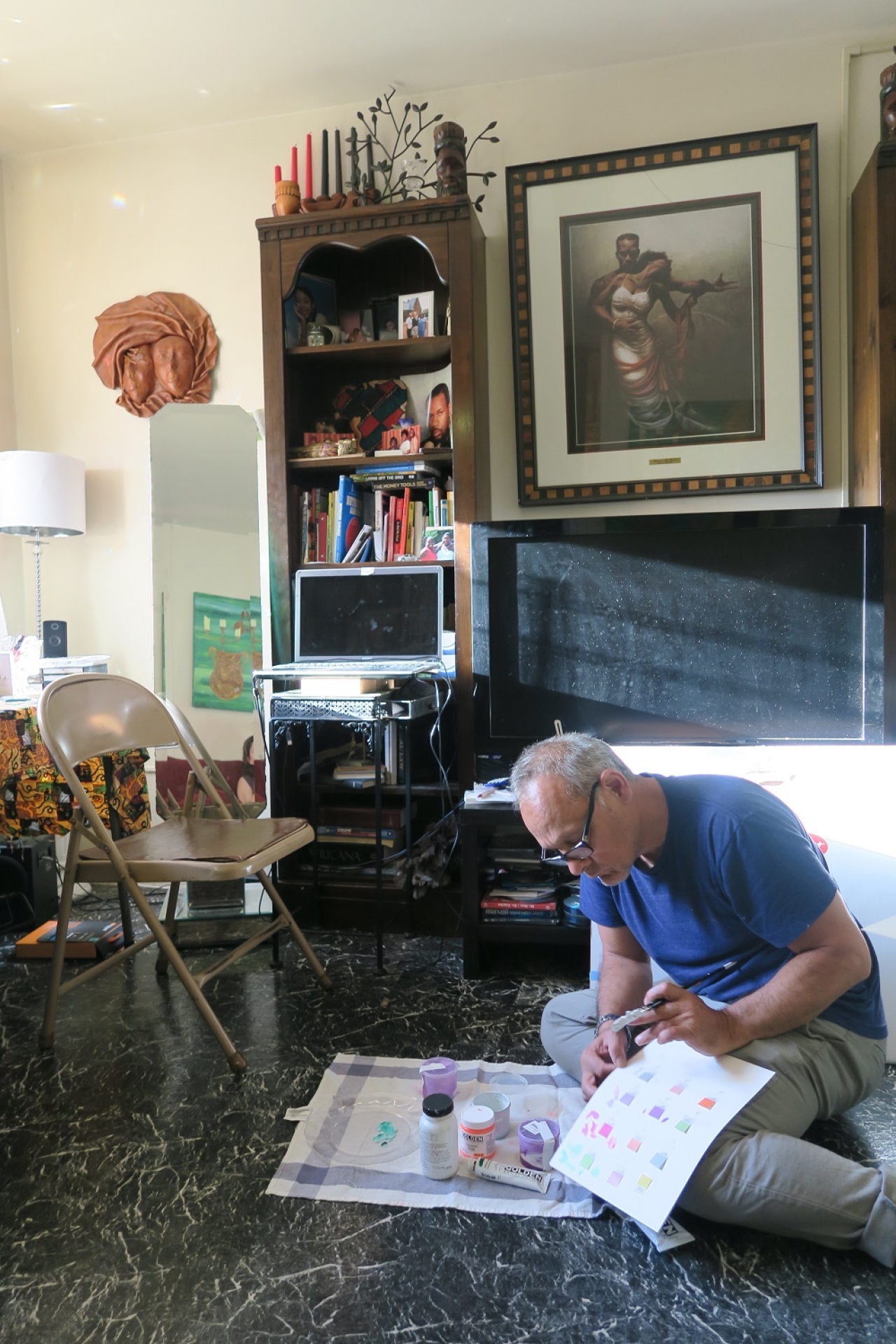 When George starts to mix his colours, she explains that she can mix any skin tone with her make-up kit. To demonstrate she mixes George’s skin tone in no time and uses it to camouflage the dark rings under his eyes. The colour is perfect. And because he doesn’t have any eyebrows, she swiftly pencils them in with an expert hand. 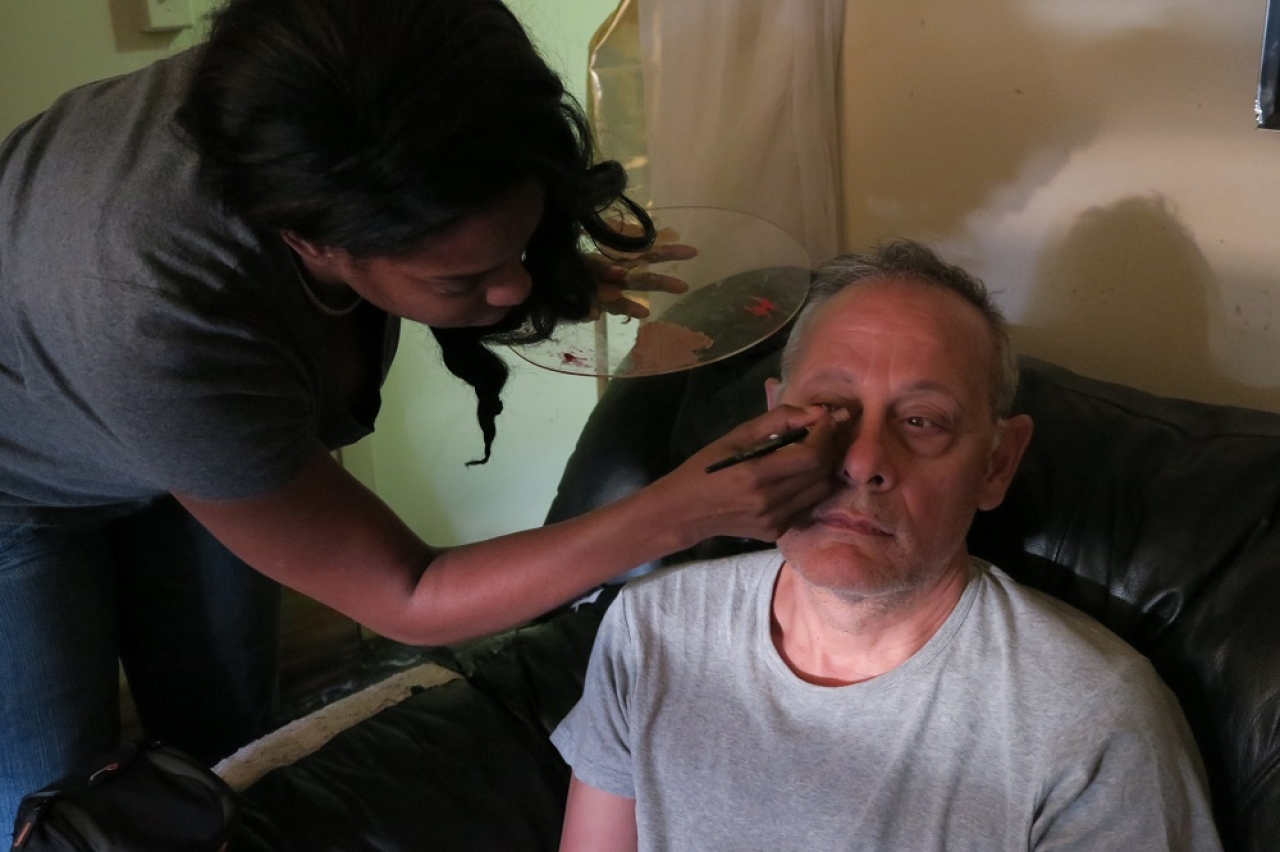 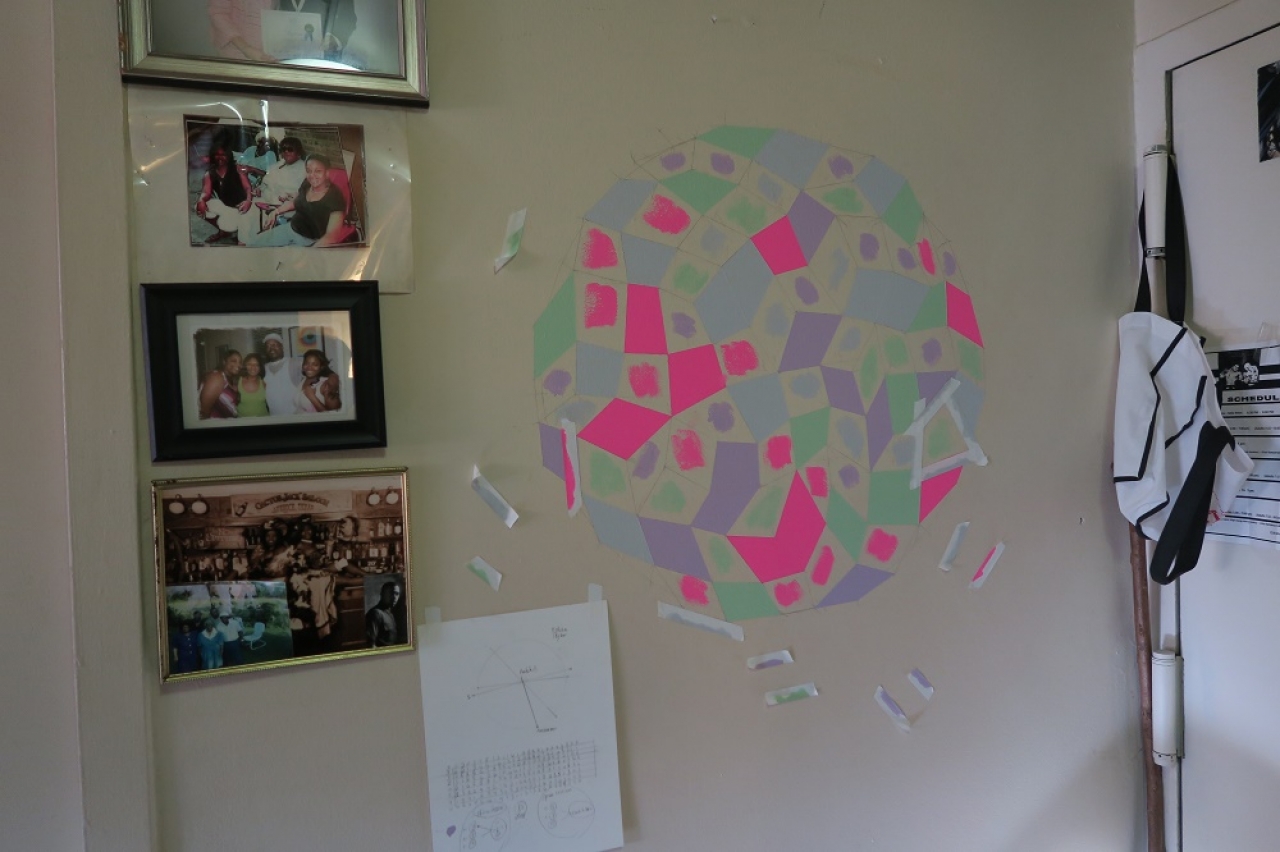 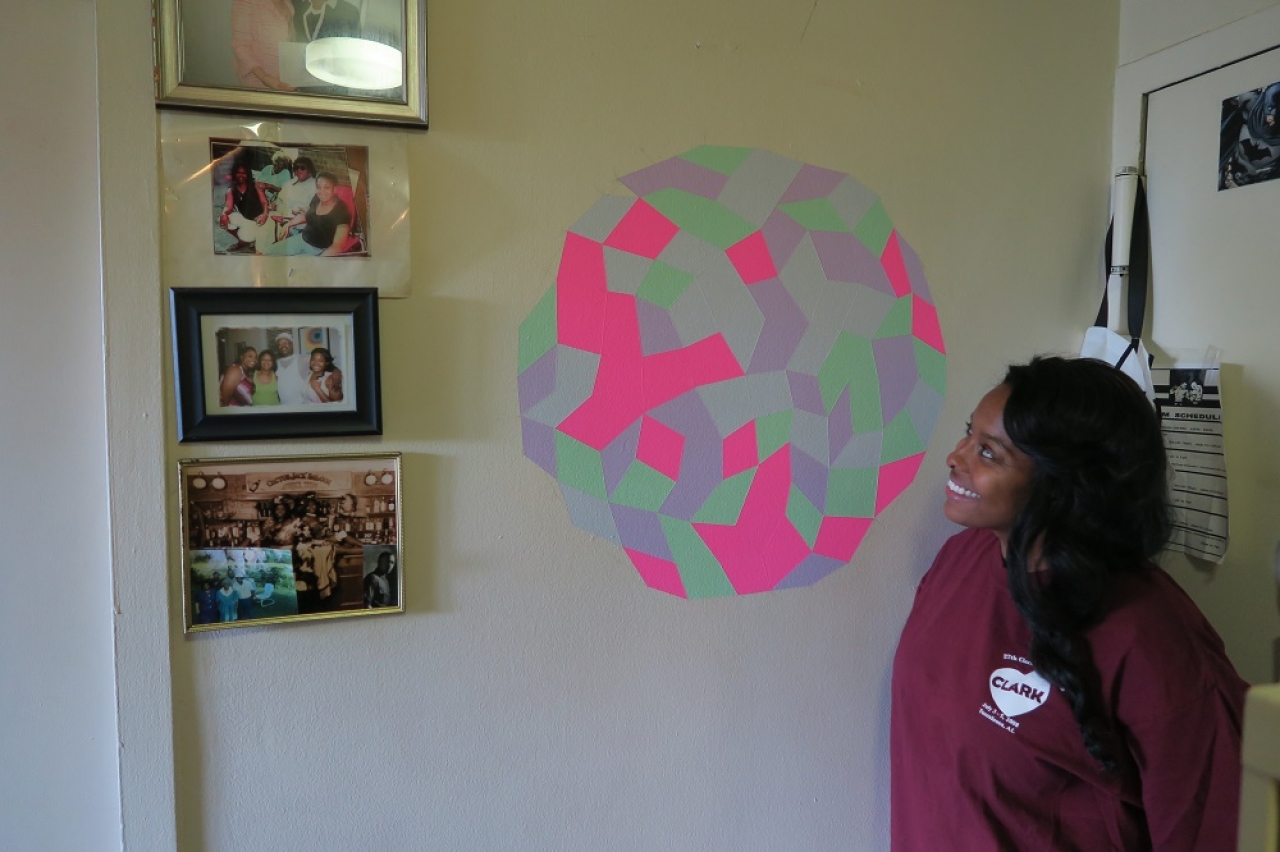 In the morning we apply the final layer of paint at Mishiba’s place and then we start in Emerson’s apartment, which is even more chock-a-block than Mishiba’s. His home is a museum and a workshop combined, a mix of everything: an electric guitar, a collection of caps, all kinds of tools, boxes full of videotapes, CDs, a Viking helmet, and loads of audio equipment. And also his kit from his time in the army, as Emerson is a veteran and as a soldier he used to work all over the world. He shows us his desert boots, as well as his collection of knives and torches.

Emerson calls himself a tinkerer. Since having an accident that smashed his foot he has had to move around with a walker and spends much of his time playing music, watching films and tinkering. He worked as a maintenance man at Bohlmann Towers, but his foot injury means he cannot work. He is especially handy with audio equipment, and has created his own surround-sound system in his room with 22 computer speakers and it sounds surprisingly good. He also has a special TV, which can be used outside in the summer by passing long cables through his window to the barbecue area behind Bohlmann Towers.
If we’re going to build on the expanse of grass he will take care of the music with speakers and long cables.

I still believe that everything that is heard or happens in the room while throwing the dice influences the painting. I reckon that’s auspicious here. While throwing dice and painting we listen to The Beatles, Jimi Hendrix, d’Angelo and Adele. We talk about politics, his time as a soldier, many serious topics, but we also laugh about plenty of things. And we have moments of shared emotion. It’s as if we’ve known each other for a very long time.
It will be a really rich painting here in Emerson’s room. 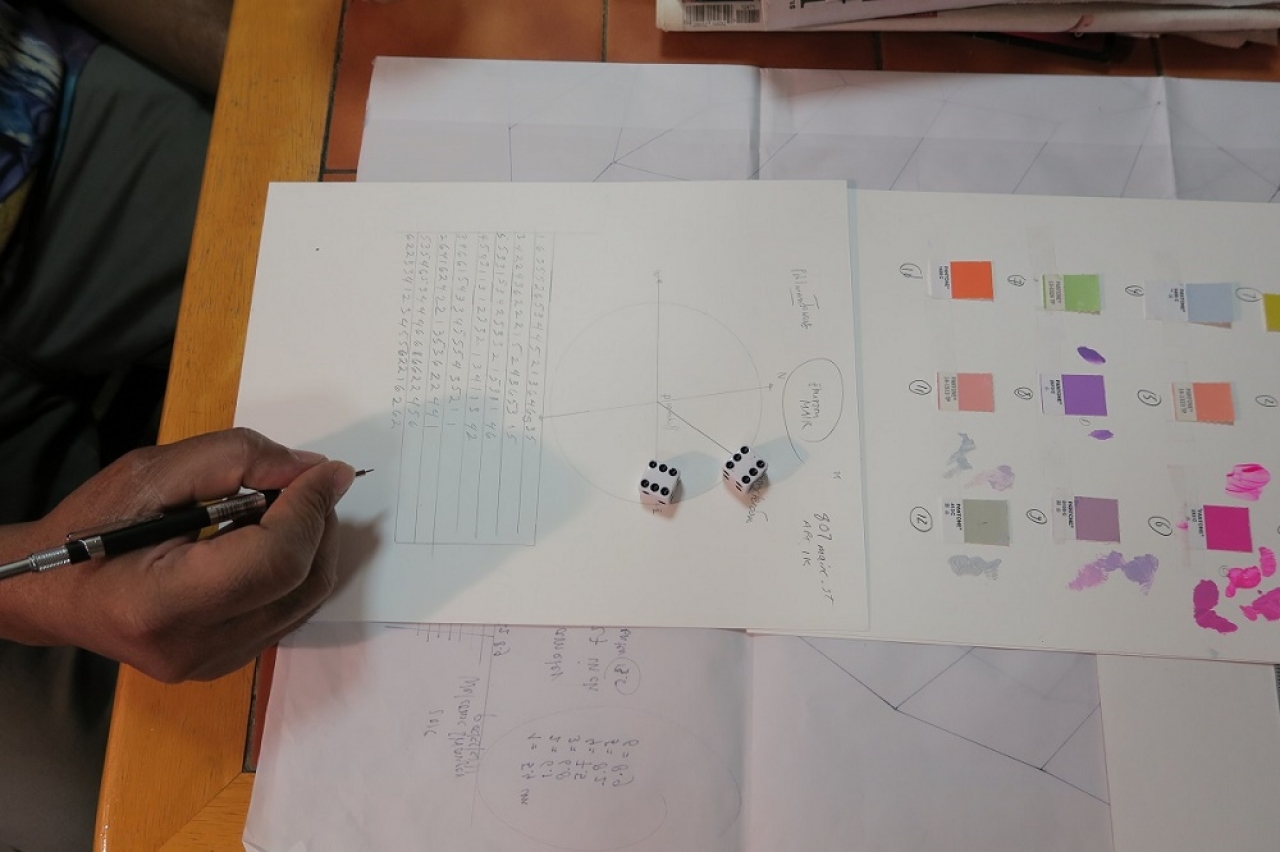 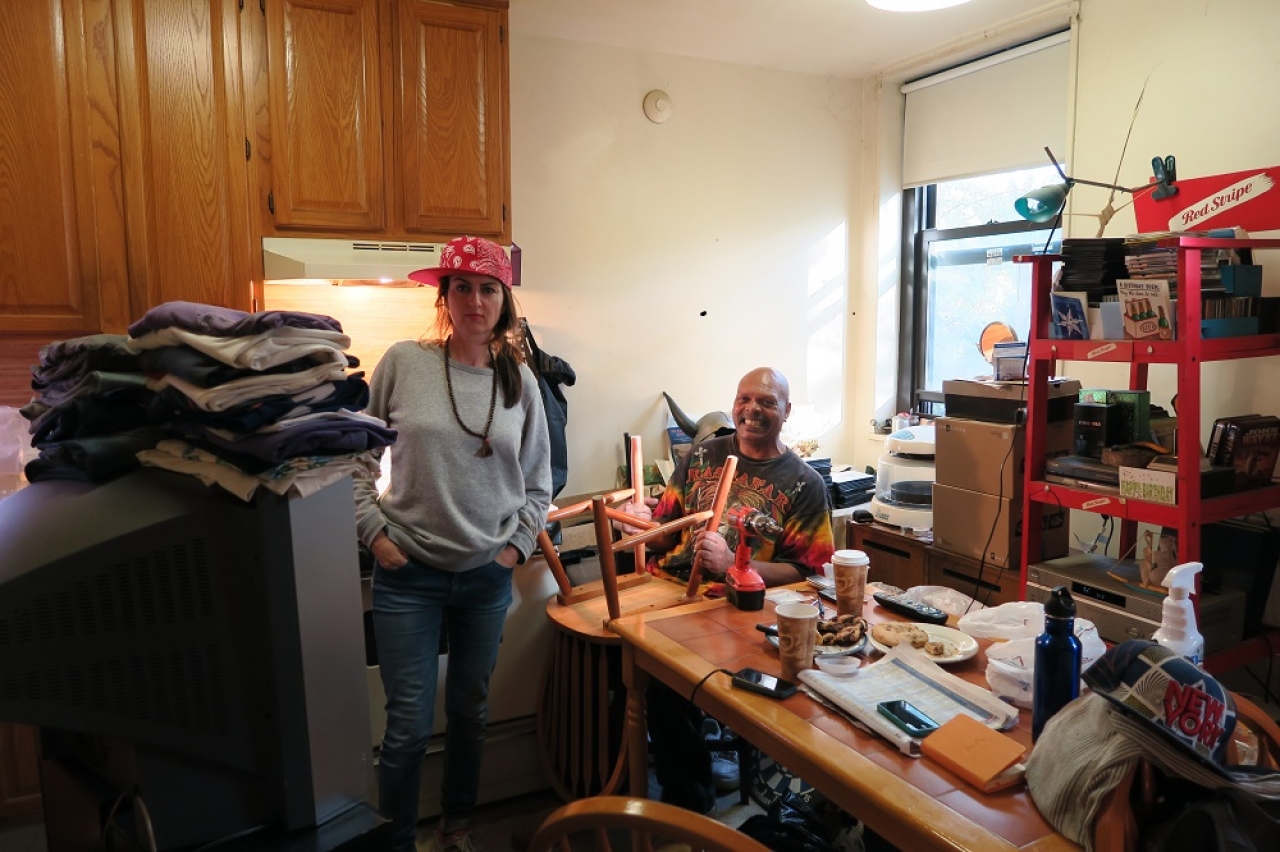 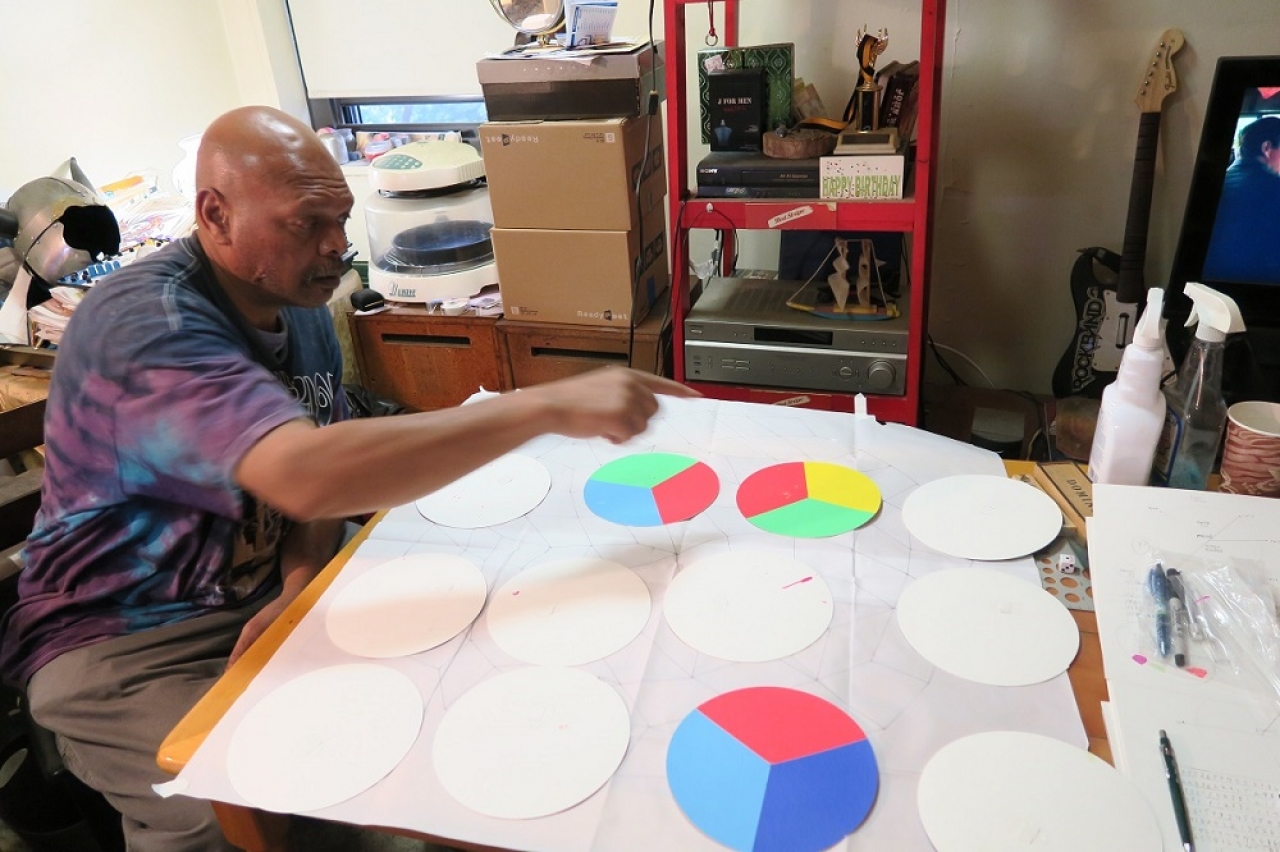 Mishiba comes by with a surprise for us: She’s added something to her painting herself, using the paint we left behind at her place. I’m slightly shocked and immediately head upstairs with her to take a look. Above her painting she has painted curls in the same shades of paint and alongside it she has written ‘Geech Studio’ in decorative letters, the name of her beautician’s practice. For a short while I’m confused, because that’s not how it was planned. Mishiba’s curly, freestyle handwriting is so different to the regimented painting, but I quickly reprimand myself, because if you want to undertake a painting process like this with an open mind, and if you want to embrace all the unknowns, than spontaneous contributions are part of the bargain. In addition, Mishiba is the painting’s owner, so she can do whatever she wants with it. George is immediately charmed by Mishiba’s contribution. He thinks it’s great that she wants to paint again and as a surprise he goes and buys brushes, canvases and paint for her. 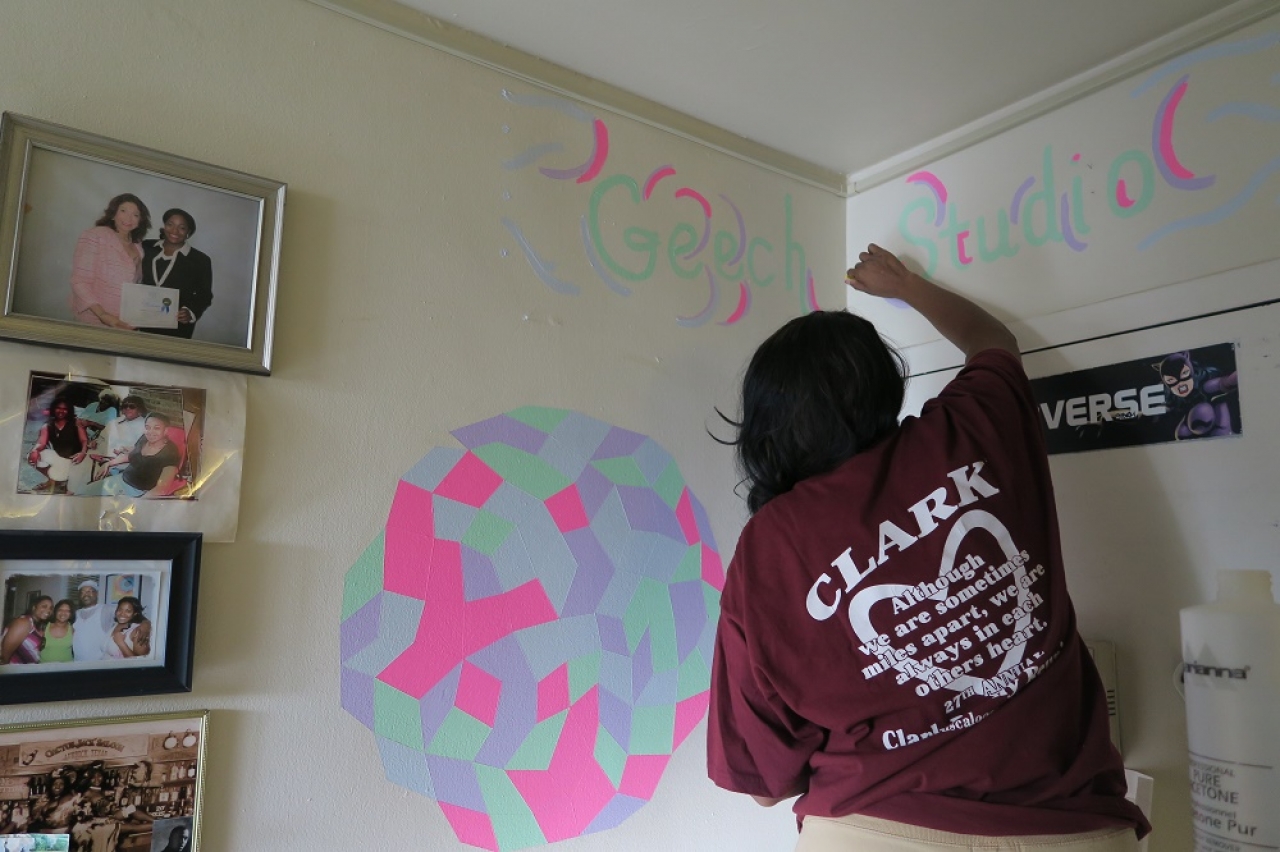