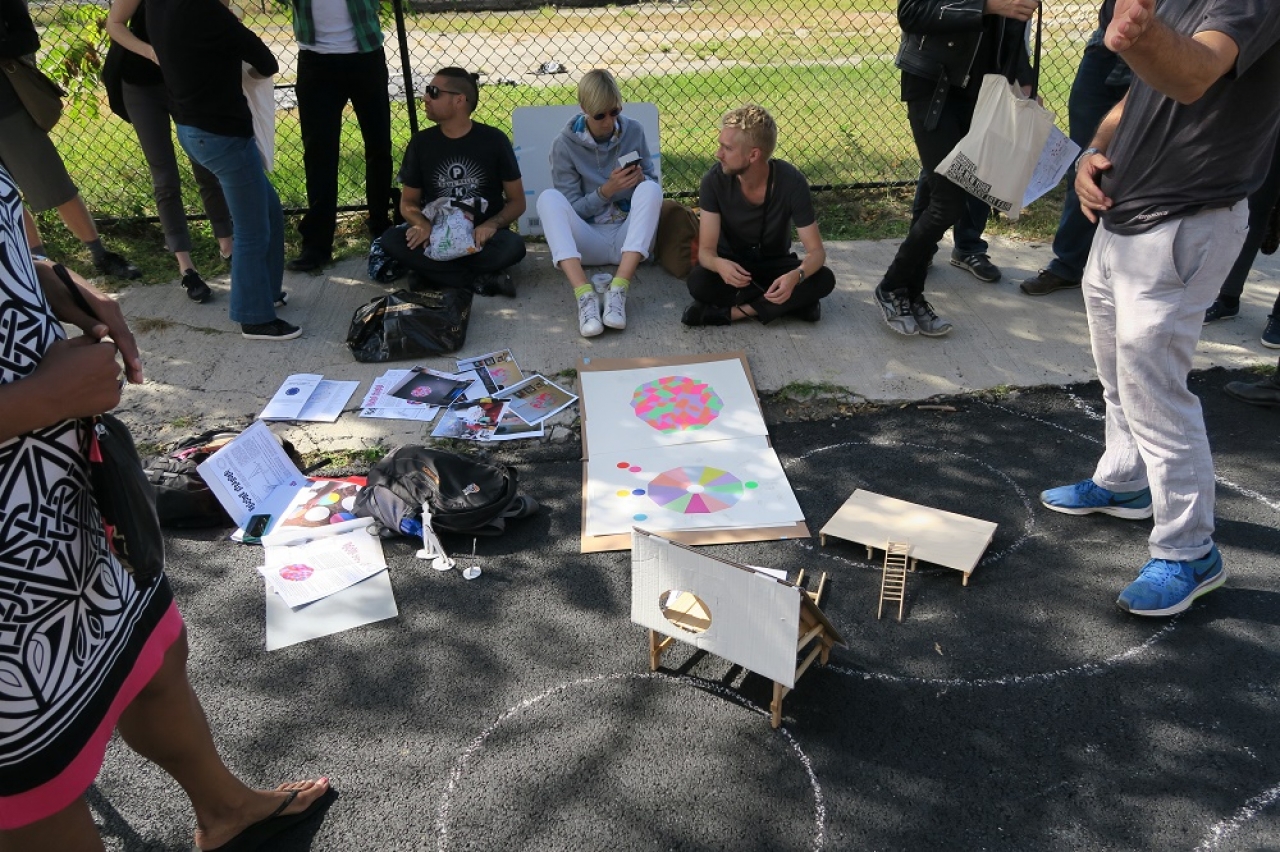 27 September, opening of the festival; one of our works in not finished, the other one is invisible. We present our sketches outside on the street to passers by.

Today is the opening of the festival. The weather’s wonderful and it’s bustling in the streets with visitors from outside Peekskill. Our sculpture still hasn’t been realized and the wall paintings can’t be viewed without prior agreement, but we hear that there’s a journalist from the The New York Times who is interested in our project and wants to see the wall paintings. Emerson is happy for her to visit his apartment.
For our most invisible public work ever, such interest is quite remarkable!

We start work on the painting in the Community Action Center’s office next to Bohlmann Towers, where Ms. Mary Rainey together with Ms. Doris Goodman are the community’s towers of strength and they are both devoted to helping those who need it most. And that is no small task: domestic violence, unemployment, drugs, poverty, criminality and racism are the norm here. Ms. Mary would like the painting in her office, primarily for the people who drop in for help every day. She has already cleared a spot above the photocopier.
There isn’t much time to throw the dice, as the telephone is ringing non-stop. But that doesn’t matter. During the telephone conversations she can keep on throwing the dice with one hand and I note down all the numbers for her. We throw dice for about an hour and a half, and in that time Ms. Mary resolves various problems. She prevents a family being evicted, she sorts out the payment of an electricity bill, arranges transport to a hospital, and helps someone who has just come out of prison to find accommodation. In the meantime I whisper the numbers from throwing the dice at George, who plots them straight onto the wall with a ruler and pair of compasses. 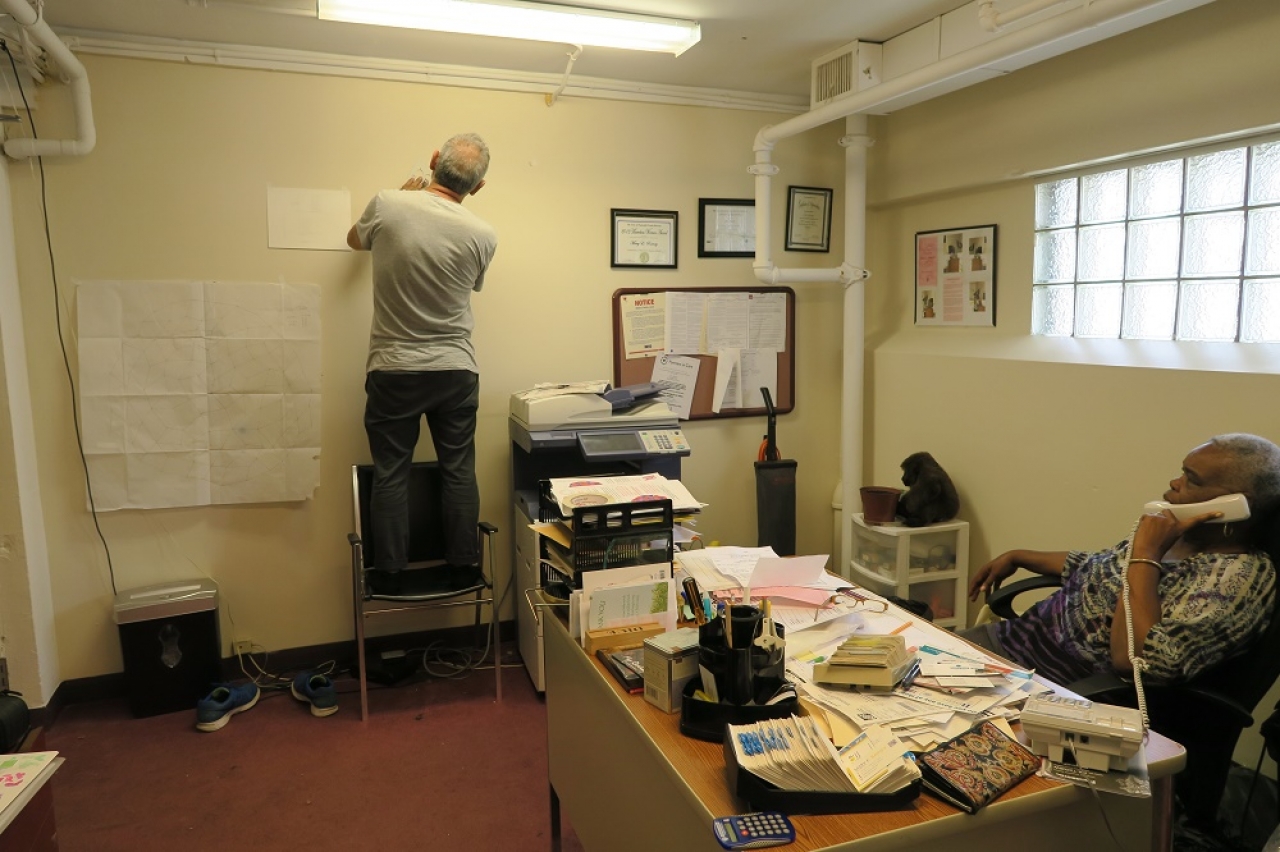 Today is another foodbank day and I help to distribute the bread and cakes while George finishes the sketch on the wall of the office. Suddenly there’s a load of screaming and it almost degenerates into a pie fight. A woman with two over-stuffed bags has just been called out for her greediness. The woman is furious and yells that she doesn’t need any more cakes from black people, because they’re all racists anyhow. And she will never come back here. She furiously flings her pies back onto the table. Ms. Rainey, who has seen many things in her time, calms down the situation without batting an eyelid.
In the afternoon Ms. Doris and Ms. Rainey choose colours ‘blindly’ for their painting. I don’t know how they’re doing it, but they’re ‘blindly’ selecting the four most gentle, most calming colours that we have: two shades of pastel pink and two shades of light green. Not a bad choice for this place! 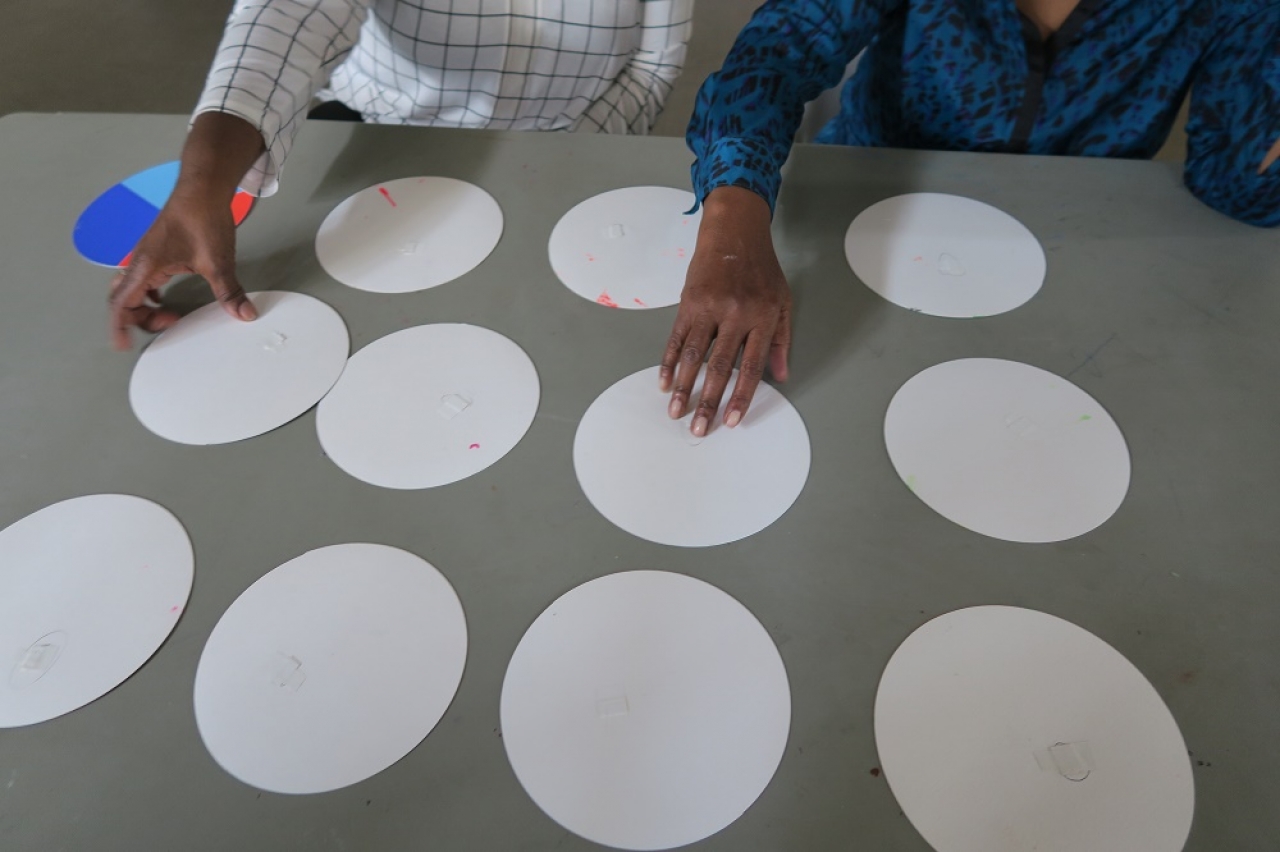 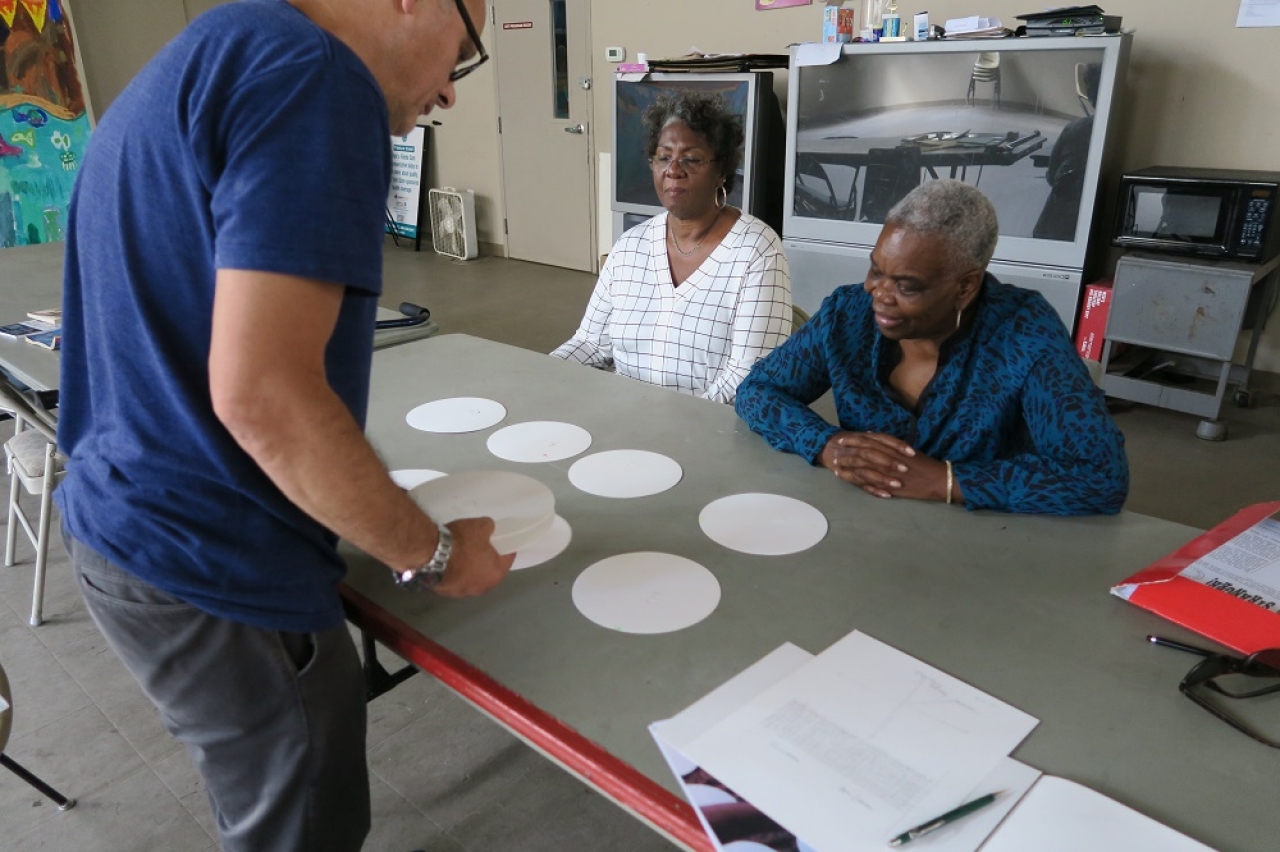 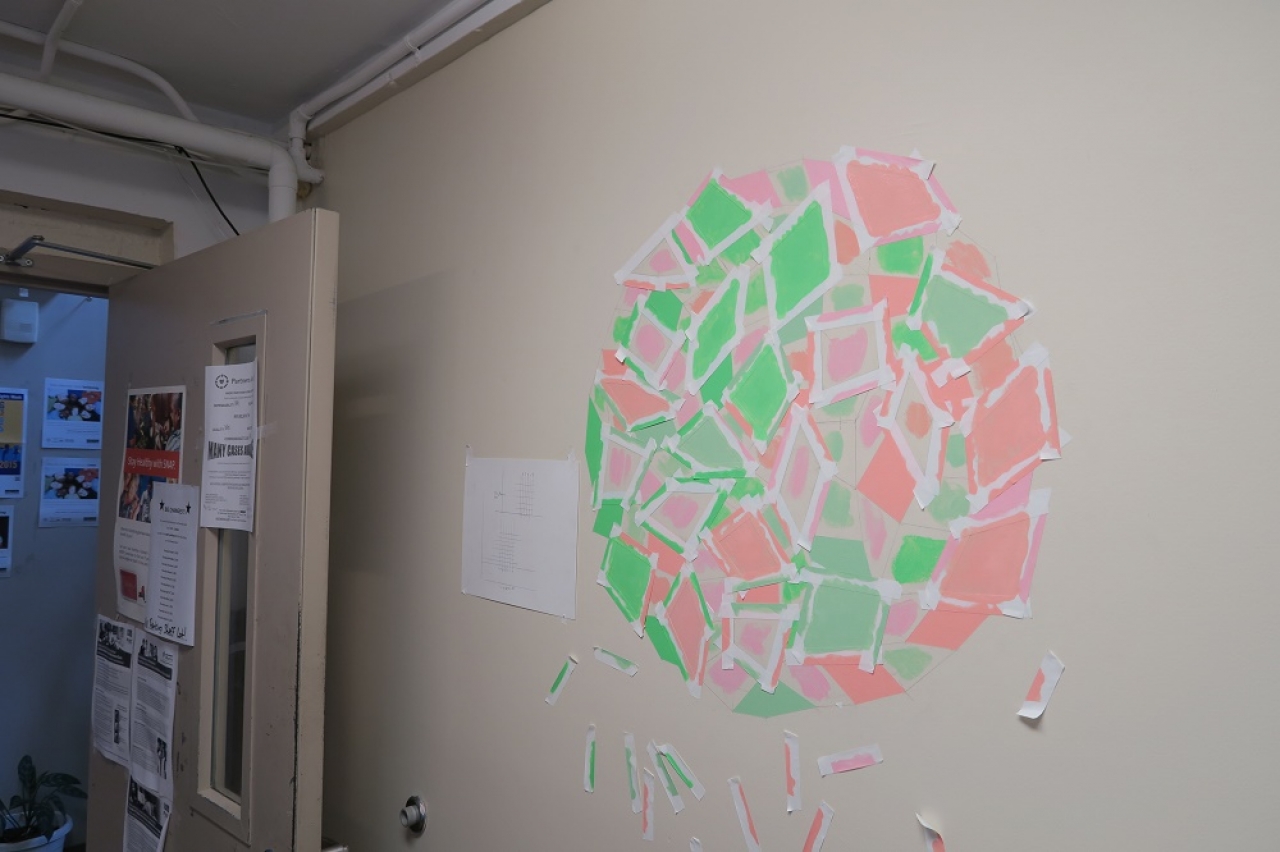 We continue painting in the office while Ms. Rainey continues tirelessly with her work on the telephone. We’ve heard that she used to be a renowned civil rights activist. The flower garden around the Kiley Center was planted in honour of her work and was dedicated to her, or so we read on a plaque on the facade. We think she deserves a whole park with fountains. We’re impressed by her work for the community as well as her modesty.
We ask about yesterday’s ‘pie incident’ and we discover that there’s plenty of mutual dislike and racism between the African Americans and the Latinos in Peekskill. We’ve been told that the Latinos primarily come from Ecuador and accept lower wages, which makes them unfair competition on the job market. Plus they don’t integrate into local life. They still speak little English even if they’ve been here for years and they don’t participate in local community life.
We talk about the Peekskill Riots and Paul Robeson with Ms. Rainey. She tells us that she still commemorates the Peekskill Riots every year, at the precise spot where they broke out. Nowadays she does that with a mixed company of people of every colour. But once they were pelted with stones by white people, just like Paul Robeson back in the day, which had made a deep impression on her. Fortunately she draws plenty of inspiration and strength from her faith, and that also applies for her work. She invites us to Thanksgiving dinner at her daughter’s house in November. We’re more than happy to accept the invite.

All kinds of things are collected at the Kiley Center for people who have nothing. Today someone has brought boxes full of second-hand household goods. There are cups, plates, Christmas decorations and all kinds of knickknacks that the thrift store doesn’t need. Ms. Rainey asks whether I can help her to put together two boxes of gear for two men who have just been released from jail and don’t own a thing. I try to imagine what they might or might not want to find in their box. I’m definitely including the coffee mug with ‘Home Sweet Home’ and the mug with ‘Happy Holidays’, even though one of them has lost its handle.

We’ve been on stand-by to start building for days, but we’re stuck in a sort of catch 22 with the construction permit. It’s taking way too much time and it looks as if we won’t be able to start building before the opening. Liability is taken seriously here in the USA—something you don’t want to burn your fingers on.
In any case we have to radically modify the design for public safety reasons. Everything has to be lower and there have to be foundations of a size on which you could build a two-storey house, in case there’s a hurricane and the stage with mirror and the whole caboodle flies into the sky. The police insist that the ‘hidden space’ must remain completely open, because of dealers and homeless people, and the mirror cannot be placed at the front, because of traffic safety. On the internet that evening I read that a mirrored building in Manhattan had set a building opposite alight, via reflected sunlight and the mirror’s prismatic effect. We’re relieved that the liability here in Peekskill will be taken care of properly. 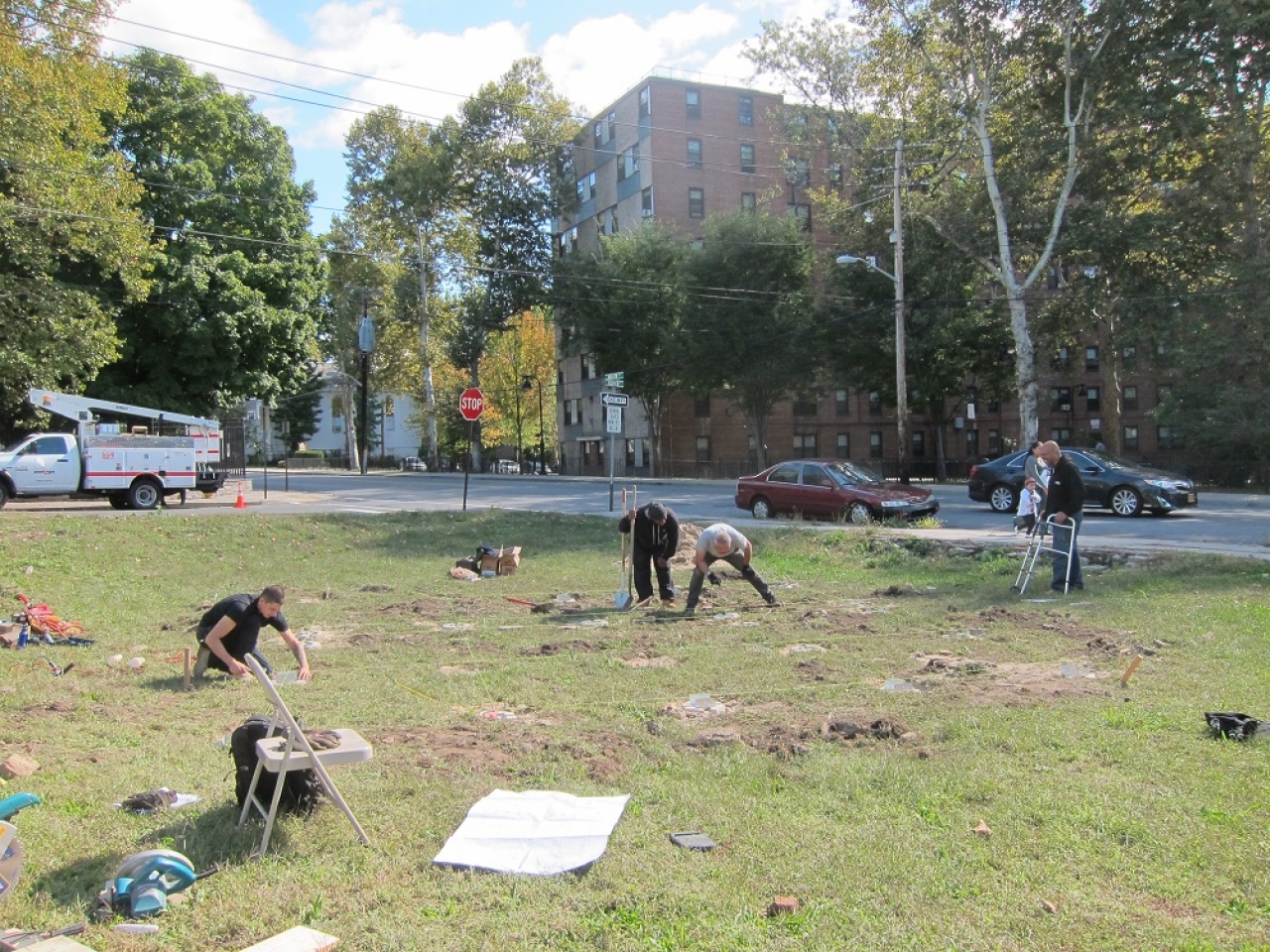 After waiting four weeks for the permit, today we can at last start building on the expanse of grass opposite Bohlmann Towers. News spreads quickly, so there are plenty of curious locals coming and going. Some of them help, and others pass by for a chat, and Emerson is serving as our permanent foreman and providing music with a portable speaker.
One passer-by seriously advises us not to put any art here; it would be better to set it on the banks of the Hudson River, with all the other sculptures. Nobody here is interested anyhow, and it’ll be destroyed or set alight. He’s certain of this, because he lived in Bohlmann Towers for years and is happy that he got away from here at last. And if we really want to continue, then we’ll have to watch out for ourselves and our things, and avoid coming here at night. Other people disagree with him. It’s time for change in this neighbourhood and art is something positive, especially as its being created together with the local residents and they will then be its lifelong stewards. Nowadays there are enough local residents who will keep an eye on things, right now and also later when it’s finished. Moreover, it’s unusual for two artists from the Netherlands to provide a free stage for the neighbourhood, so they’re happy about that. Except for the food from the foodbank they never get anything for free here.

We are confronted with preconceptions about Bohlmann Towers every day. We are still busy painting and a few times when we head off towards the building someone offers to walk with us, in case we ‘don’t feel comfortable’ there. We get the hint, because we’re just about the only white people there, so that must be what they mean. But we feel totally at ease in Bohlmann Towers. The residents greet us, stop to have a chat, and politely hold the door open for us. No worries. Everything is copasetic.
The only thing that strikes us there is that the hallways are painted strangely, very ‘institutional’. In the Netherlands only the really old-fashioned prisons would be painted in this style.

During the construction process, passers-by tell us lots about the neighbourhood and what it used to be like here. Most of the stories involve drugs and crime. Someone tells us that Mariah Carey’s sister used to hustle on the streets here. She was addicted to crack, but her famous sister didn’t lift a finger to help her. Nobody knows where she is now. Someone else explains why there are so many expensive sneakers hanging up high on the power cables: they are the tags of various dealers, who mark out ‘their territory’ with a certain brand of sneaker. 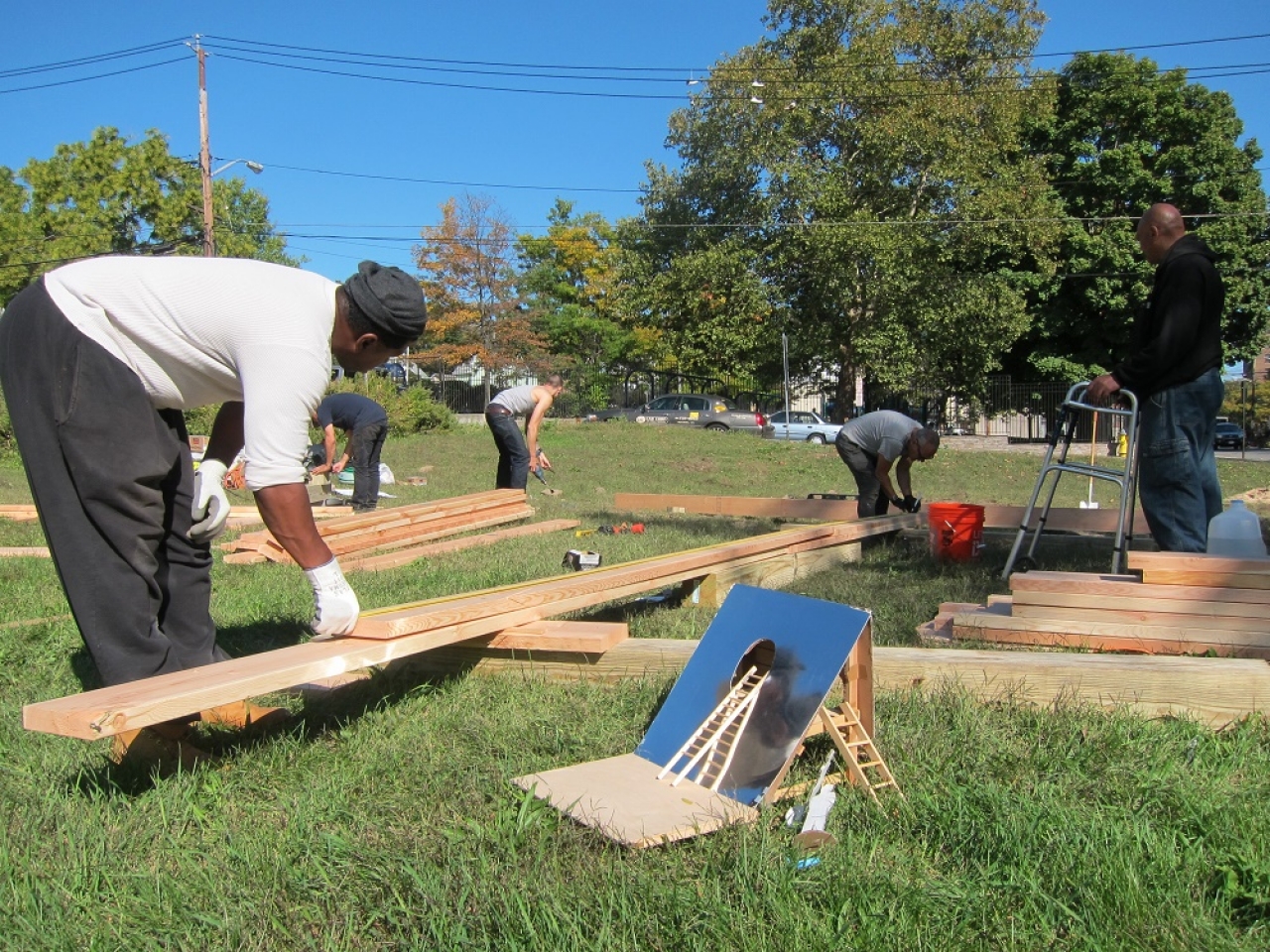 We also listen to a few of the life stories of local residents. The youth worker from the Kiley Center tells us his story. He used to be a dealer here. It was dangerous, but with so many addicts business was good, really good. When he was eventually seized by the police he owned six cars and two houses, and they found $500,000 in cash at one of his homes. He has served his time and now he has started a new life. Now he has absolutely nothing left, but he feels much happier because he no longer has any worries. And he goes to church and he takes inspiration from that.
Someone else tells me a similar story. He was a dealer and lived under constant stress. He always slept lightly, because someone could have broken into his house at any time. Everything changed when a heavily pregnant woman came to buy crack from him. Despite him refusing she kept begging him for dope. His buddy didn’t see the problem. ‘If we don’t sell it to her then she’ll get it somewhere else.’ But for him the buck stopped there. He’d had enough and stopped. As far as he’s concerned it’s a circle of negativity that needs to be broken and the only way of doing that is by quitting. It’s not easy if you don’t have a job and you have to support a wife and kids, but poverty is preferable as far as he’s concerned. 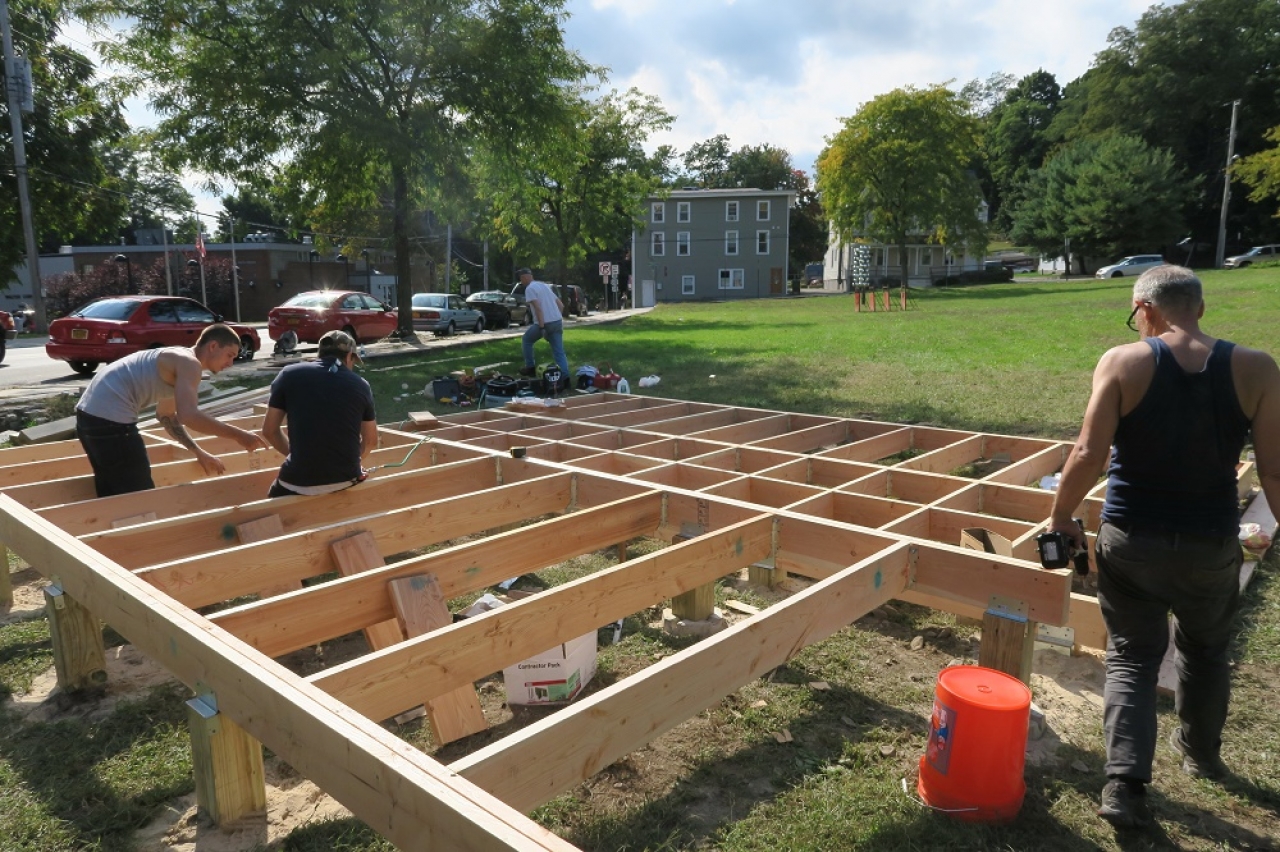 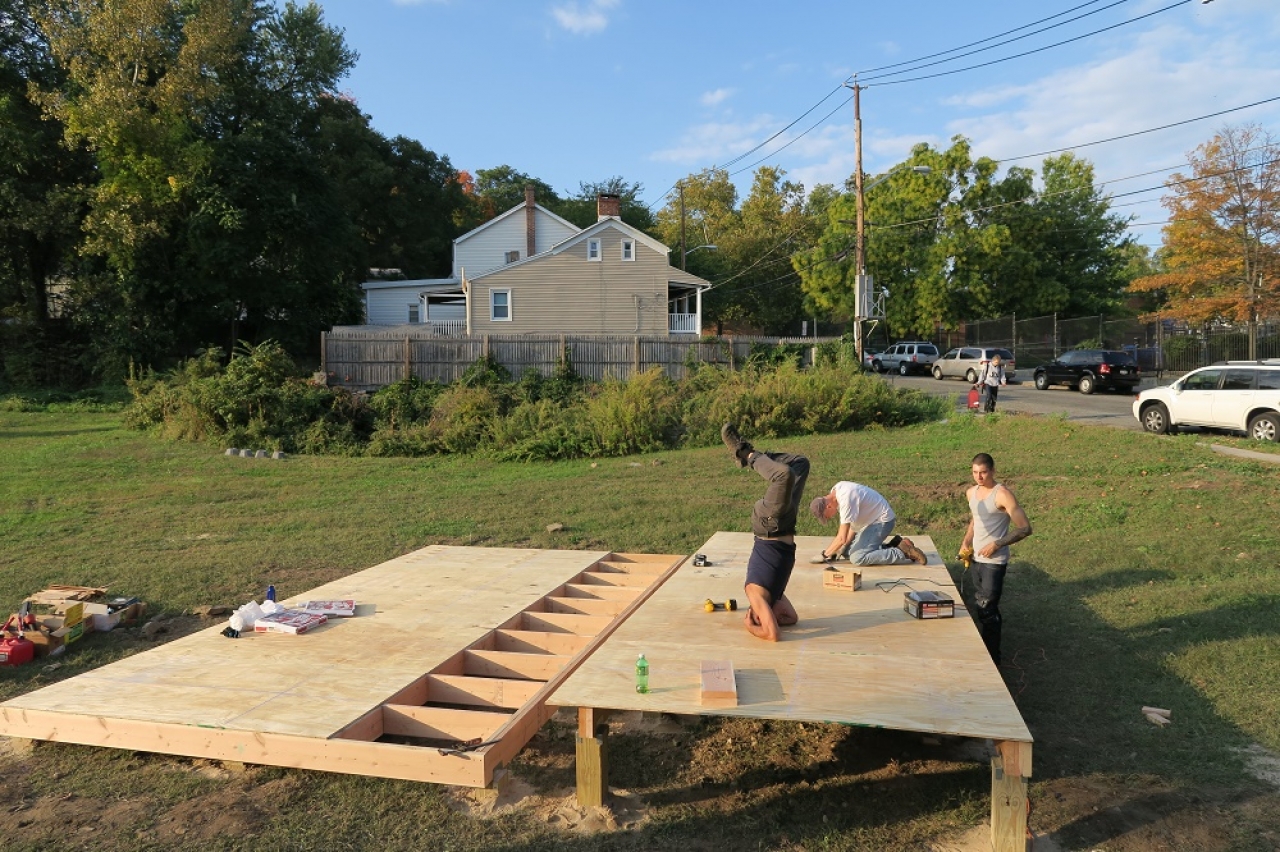